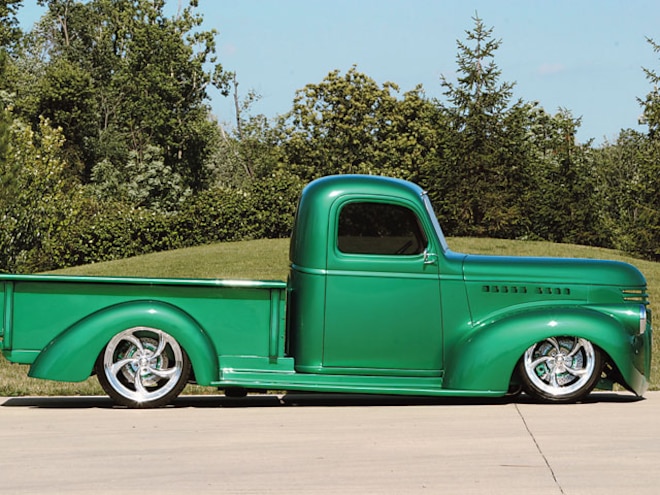 View Photo Gallery | 13 Photos
Photo 2/13   |   1941 Chevy Pickup right Side
It is cool when a married couple enjoys the same ventures and interests. Having compatibility mixed with passion for cool custom early-model cars and trucks lets you know you married the right person. Especially when she is out in the garage turnin' wrenches and bustin' knuckles with you.
Don't forget the always popular--helping to clean and detail your ride at shows. This has been the wedded bond of Kevin and Lorie Long, from Lancaster, Ohio. They dated for nine years prior to their 22-year marriage. Kevin is a store manger at Bob Sumeral Tire Service, Lorie works for the Department of Finance. Lorie gave Kevin the green light to pursue a custom-truck project, but she had one request: the truck must appear to be growling. Kevin looked at numerous years, makes, and models before discovering a '41 Chevy pickup with it's growling grille. The gentleman who owned the truck actually had two vehicles and would only sell to Kevin if he bought them both. Can you believe he got both of them for $500 bucks? After dragging the two '41 pickups home, Kevin began dismantling and using the best of both to complete a good truck. View Photo Gallery | 13 Photos
Photo 3/13   |   The '41 Chevy's grunt comes from a rebuilt '96 C5 Corvette with a Street Performance electronic fuel-injection system. To add some eye candy, a pair of Street Performance Valve Covers were bolted on, along with a Street Performance billet-aluminum pulley system. Notice the clean and smooth firewall.
To show Kevin's heart was in the right place, one Christmas Lori received a festively wrapped Genie Shifter, Dakota Digital instruments, Lokar brake and gas-pedal assembly, and a bag of zip-ties. The project took six years to complete.
The foundation for the '41 Chevy is a Progressive Automotive boxed frame. The front suspension consists of a pair of 2-1/2-inch dropped spindles and a pair of Air Ride Technologies Shockwave pneumatic `bags. Baer disc brakes, with dual-piston calipers, and larger 14-inch cross-drilled and slotted rotors are located at each corner. The rear suspension is also vertically adjusted by Air Ride Technologies Shockwave `bags and a Progressive Automotive Tri-Angle four-link system. The crew at Progressive Automotive in Baltimore, Ohio, are responsible for the front and rear suspension modifications. Kevin's green machine rolls on a set of polished billet aluminum Colorado Custom Slater 18x8-inch front and 20x9-1/2-inch rear wheels, which are consumed by 235/30R18 front and 285/30R20 rear Bridgestone rubber.

View Photo Gallery | 13 Photos
Photo 7/13   |   1941 Chevy Pickup right Rear
The grunt comes from a '96 Corvette 5.7L engine with a cast-iron block and aluminum heads. The engine was disassembled, then machined, and rebuilt with all-new pistons, rings, and bearings. Kevin deburred, ported, and polished the aluminum heads for a more efficient flow. A Street Performance electronic EFI was mounted on and plumbed. The Sanderson ceramic-coated block hugger 1-1/2-inch-diameter headers collect into two 2-1/2-inch-exhaust tubes that flow into a pair of chambered mufflers. To add some bling, Kevin installed a pair of Street Performance aluminum ball-milled center-mount valve covers and engine pulleys. To keep the engine and transmission cool, Kevin dropped in an ARE four-row aluminum radiator. The horsepower is transferred from the `96 C5 automatic transmission and has a single driveshaft linked to the narrowed, beefed-up Ford 9-inch rear end with a pair of 31-splined Strange axles and new Richmond 3.73 gears.

View Photo Gallery | 13 Photos
Photo 8/13   |   1941 Chevy Pickup colorado Custom Wheels
The body mods, prep, and paint were carried out by the talented crew at Air Tight Grafix in Columbus, Ohio. Beginning with the steel cab, the doors and bed were media-blasted, straightened, filled, and then block-sanded to perfection. The original running boards, fenders, and hood were replaced with fiberglass components. The hood was replaced with a fiberglass one-piece hood. The hood was then hinged in the rear to open at the front. The two side panels are removable. The cab, drip rails, door handles, and door hinges, were all shaved smooth. Transforming the original barnyard hauler into this cool truck rod was the color inspired by a metallic-green plastic lid on a can of Pledge furniture polish that caught Kevin's eye. The guys at Air Tight Graphix used PPG Green as a base, then mixed and matched the metallic green of the Pledge lid, which created the brilliant green hue. After the green basecoat was applied, it was color-sanded, then buried in multiple coats of clear.