No 'Bags But Just Right 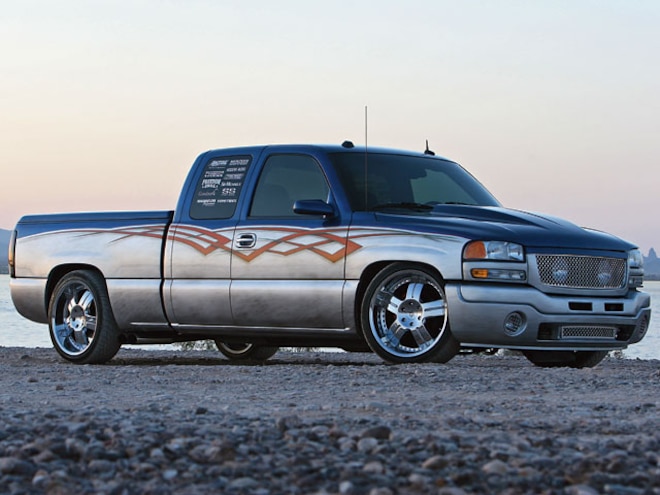 View Photo Gallery | 12 Photos
Photo 2/12   |   2006 Gmc Sierra right Side
It was a debate where each side was heard, but after the dust settled, a unanimous "Yes" was voted for this month's cover truck. Clean, custom, and wild in its own right, Justin Bender's GMC Sierra is a great example of what average custom-truck enthusiasts can build in their own garages. The bed, on the other hand, well, let's just say it may take some real skill to pull off. Blown, lowered on 22s, and sporting some pretty cool tricks, this two-tone fullsize is exactly what the doctor ordered. 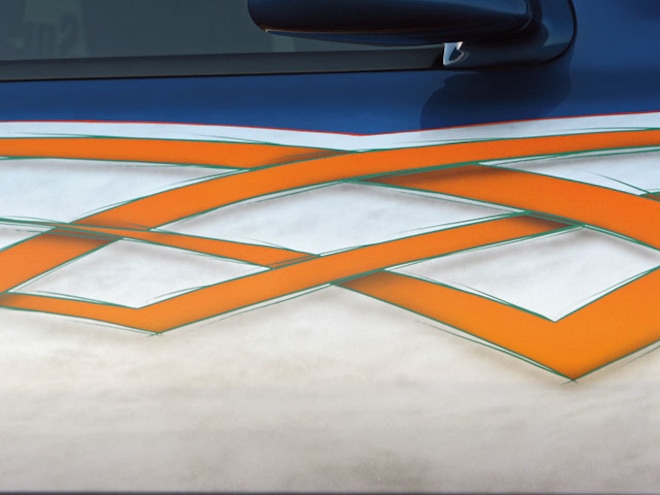 View Photo Gallery | 12 Photos
Photo 3/12   |   2006 Gmc Sierra logo
Powering those 22s is an '07 5.3L V-8, which is equipped with an intercooled ProCharger supercharger stuffing 8 psi of atmosphere into the aluminum heads. A K&N intake and Hypertech power programmer keep the 5.3L running its best. Sending the exhaust on its way are high-flow cats from MagnaFlow, along with a side-swept exhaust from MagnaFlow. More than 450 hp is sent through the built '07 transmission to the factory rear end to roast the Toyo tires at will. Several plastic pieces were smoothed and painted to match the truck and add some points at the shows. Meanwhile, three YellowTop Optima batteries keep things charged. 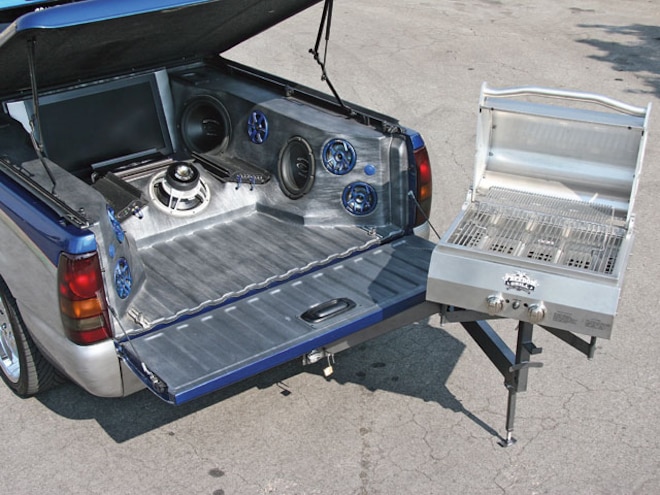 View Photo Gallery | 12 Photos
Photo 4/12   |   Who brought the hot dogs?
Body-wise, most of the modifications were bolt-on, with the exception of Merzee's Paint and Body of Santa Fe Springs, which shaved the tailgate handle and bolted on the Sir Michael's roll pan. A steel Goodmark hood received louvers, thanks to a special Sir Michael's treatment, and a Precision Grilles mesh grille insert, which hides the PIAA racing lights. Merzee's also added the GMC Denali door handles, Street Scene Equipment Cal-Vu mirrors, and an ARE tonneau cover onto the truck. Jeff Merzee then went to work applying the ALSA blue, orange, green, and silver paints to the GMC. A classic two-tone was complemented by an aggressive orange graphic that was applied over the silver, which has a brushed-on effect covering the lower half. The overall scheme is very much custom, but still very livable, as well.

View Photo Gallery | 12 Photos
Photo 5/12   |   2006 Gmc Sierra sunset View
Then, Modern Audio in La Habra stepped in and created a wild audio and video system for the truck. After lining the door panels with Dynamat, Randy Medina created custom speaker pods for the 6-1/2-inch Cutting Edge Audio speakers located in each door and rear extended cab doors. Randy also built a subwoofer enclosure in place of the rear bench seat that now houses three Thrasher 12-inch subwoofers. Powering all of this audio are three Cutting Edge Audio amps mounted inside a plexiglass enclosure on the back wall of the cab. Monitors were installed into each sunvisor, with a 15-inch screen hanging from the suede headliner. Entertainment is provided by a Pioneer AVIC D-1 and a Play Station 2.

View Photo Gallery | 12 Photos
Photo 6/12   |   2006 Gmc Sierra dashboard
Entertaining guests is no problem, especially at sporting events or at the river, once the ARE tonneau cover is opened. A huge enclosure houses two more Cutting Edge Audio amps, two Saber 15-inch subs, three 12-inch subs, and a 32-inch LCD monitor. The enclosure was coated in Diamond Liners spray liner with a brushed graphic to match the paint scheme. Tailgaters also get to enjoy the Freedom Grill that slips into the Hidden Hitch and provides instant BBQ fun. Radi's Upholstery in Garden Grove added black ostrich inserts to the black leather seats, then also wrapped the steering wheel in black suede. Black suede was again used to cover the headliner, visors, and grab handles. The dash was smoothed, painted, and a carbon-fiber dash bezel completes the custom interior trim. The GMC now looked and performed on a whole new level, thanks to some talented folks and generous sponsors. So, what is next for this Sierra? Could a fifth version of this fullsize be in the works? Stay tuned, the future looks bright.