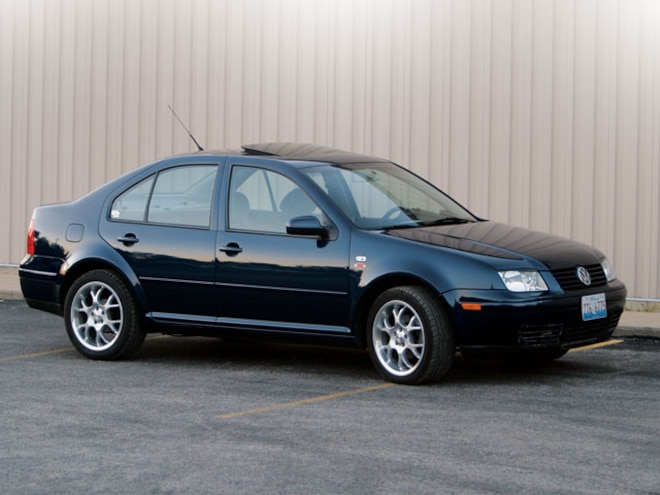 View Photo Gallery | 7 Photos
Photo 2/7   |   2002 Vw Jetta Tdi left Side View
We know most of you readers are used to big, heavy trucks that make gobs of torque, but when we found out this little '02 Volkswagen Jetta made a whopping 493 lb-ft of torque with only 1.9 liters of TDI power, we had to tell you about it. Not only that, but the VW has been lightened to 2,950 pounds without a driver, so it can be a corner-carving, drag-racing machine while still getting more than 40 mpg.
Tom Calvert, owner of Illinois Dyno Center in Port Byron, Illinois, decided to go down a different path than most. He knew about the efficiency of diesels from his previous Mercedes-Benz 300D, so in 2002, he bought a new Jetta TDI. After driving it off the lot, Tom couldn't help but notice how slow it was, so with only 184 miles on the odometer, he drove it to Indiana to have a computer chip installed. After that, the project sort of snowballed into what you see today. Tom just kept modifying his VW to see how much power he could get out of the itty-bitty four-cylinder. 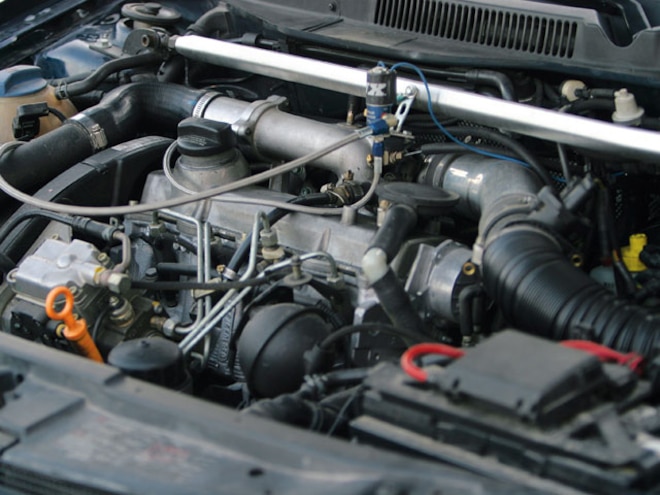 View Photo Gallery | 7 Photos
Photo 3/7   |   The NX nitrous system is easy to notice, but the turbo is located behind the engine where you can't see it, and the modified pump and Kerma TDI injectors are also invisible to the untrained eye. All these mods add up to give this little sleeper 350 hp and 550 lb-ft of torque at the crank.
Speaking of power, the most recent dyno numbers indicate 318 hp and 493 lb-ft of torque at the front wheels. With only 1.9 liters of displacement, it's the equivalent of a regular truck-sized diesel making 1,000 hp. Getting to that power level wasn't easy and has resulted in some broken parts and some seriously bent connecting rods. The engine has been upgraded with a bunch of high-powered parts including oil-cooled pistons from Germany, ARP studs, and an 11mm injection pump with a 12mm head. The cylinder head has also been ported and polished, and it picked up an incredible 44 percent on the intake and 63 percent on the exhaust.
On the airflow side of the coin, a VNT-17 turbo with a hybrid compressor wheel is used, while an intercooler from a Mustang Procharger kit handles boost-cooling duties. For exhaust, Tom runs a 212-inch downpipe with no muffler. He reports the turbocharged and intercooled combination puts out about 35 psi of boost (up from a stock 12-13 psi), and a factory ECM with Upsolute tuning by Illinois Dyno Center keeps the engine humming.
After six years of hard work, Tom has finally slowed down his tinkering on the little TDI. The results of his hard work speak for themselves, as he now has a reliable daily driver that can run traction-limited (First gear is useless) high 14s in the quarter-mile at 100 mph, yet still gets 43-46 mpg while driving around town. Not only that, but the VW still handles and brakes like a sports car, proving that diesels aren't just for trucks anymore.

View Photo Gallery | 7 Photos
Photo 4/7   |   2002 Vw Jetta Tdi piston Connecting Rod
OUCH! While We Were talking to Tom at thedyno center, he mentioned he had invested bucket loads of money into the little VW's engine. "Just a minute," he said as he came back with this piston and connecting rod. Now we don't know all that much about Volkswagens, but we're pretty sure their connecting rods didn't come curved from the factory. Tom informed us that he had bent all four rods when he got a little overzealous with propane and high boost. "We've backed the motor down a bit," he said. We're used to seeing people push the limits of performance in Chevy, Dodge, and Ford diesels, but it's good to know that diesel fanatics are also taking cars to the next level.