Rolling down the highway with 1,243lb-ft of torque 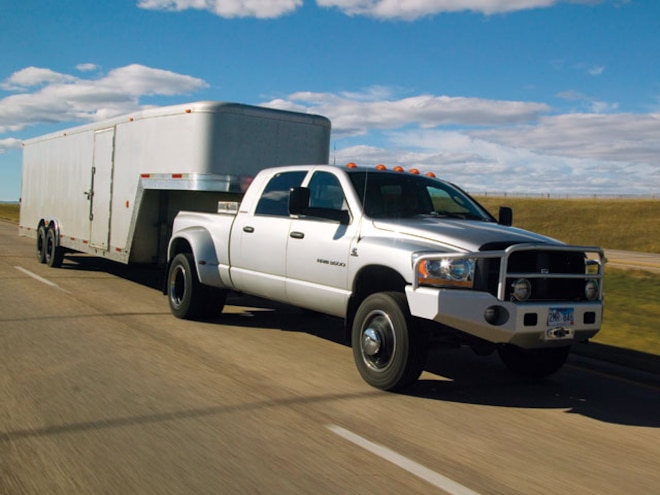 View Photo Gallery | 15 Photos
Photo 2/15   |   George's big bad Mega Cab is all business when it is rolling down the interstate. The black grille and black Rickson rims add to the aggressive look, and its 667 horsepower proves that this truck has more than just looks.
Some people buy diesel trucks for work. Their pulling power and heavy payload capacity make them the perfect workhorses. Others purchase diesels for play, realizing that the diesel bang-per-buck factor is far superior to that of gasoline engines. George Wadeson's '06 Dodge Mega Cab dualie blurs the line between the two. Officially, the silver, 1-ton serves as the tow rig for the Rock Runner Racing team-one of the premiere competition rockcrawling teams in the country-attending dozens of races each year. The team often travels hundreds, even thousands, of miles from its headquarters in Rapid City, South Dakota, to events around the United States. Unofficially, George's Ram 3500 is his own personal hot rod.
NOT STOCK FOR LONG
A factory diesel pickup would have worked just fine for this application, but in addition to ushering George around on a daily basis, the truck had to be comfortable and entertaining for the entire team on long hauls across the country. In order to keep everyone cozy and happy, the front seats were replaced with Mastercraft Baja RS reclining suspension seats. A host of Alpine audio and video equipment, including a head unit with XM radio, DVD player, two 1000-watt amplifiers, and a full complement of speakers, keep the team entertained for hours on end. Other interior improvements include the BD Performance X-Monitor on the A-pillar and Dakota Digital Gauges above the rearview mirror. The X-Monitor displays and records EGTs, fuel pressure, and boost pressure, while the Dakota Digital gauges display coolant temperature, transmission temperature, and the fuel level in the auxiliary tank.
TWO TURBOS EQUAL 65 PSI AND 1,243 LB-FT 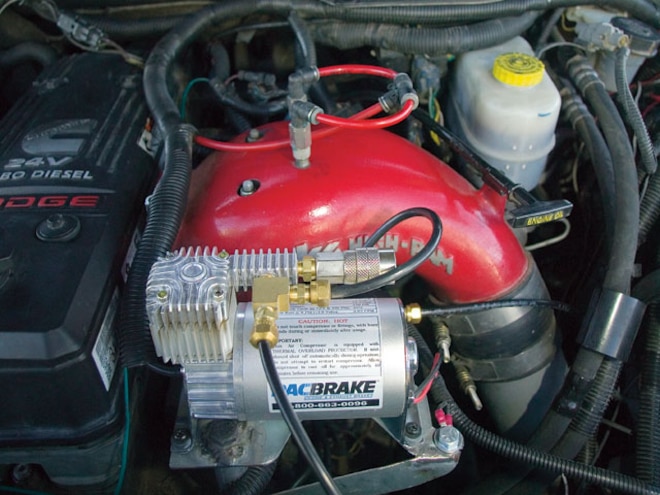 View Photo Gallery | 15 Photos
Photo 3/15   |   On the driver side of the engine sits Pacbrake's air compressor. Exhaust brakes are a crucial upgrade for any vehicle towing at (or over) its maximum GCWR. Tucked behind the compressor is a pair of injection nozzles for the Snow Performance water/methanol injection system.
Obviously, all of these gauges are not monitoring a stock powerplant. Rapid Diesel of Rapid City has outfitted the 5.9L Cummins engine with a multitude of aftermarket parts. A huge AFE filter feeds air into Industrial Injection "Towing Twins," which consist of a Phat Shaft 62 feeding air to a K31turbo. Both turbos are wastegated at 65 psi and bolted to an ATS three-piece exhaust manifold. Downstream of the turbos, the exhaust exits through a 5-inch Banks Monster exhaust. On the cold side, the air travels through a Banks Techni-Cooler intercooler and High Ram intake manifold before it is deposited in the ARP studded head. The air mixes with Dynomite Diesel 50 horsepower injectors fed by a FASS fuel system and water/methanol injection by Snow Performance. A Bully Dog downloader is the final piece of the puzzle to provide the proper tuning for the combination of big power components. The modified engine produced 667 horsepower and 1,243 lb-ft of torque on Rapid Diesel's Mustang Dyno.
TRANSMISSION OF CHOICE 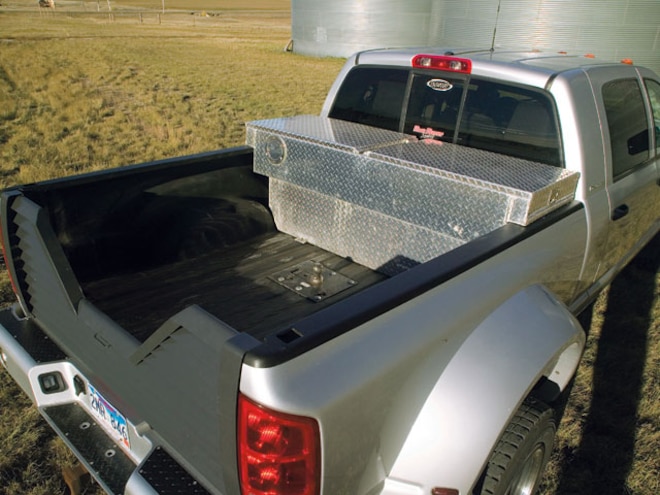 View Photo Gallery | 15 Photos
Photo 4/15   |   2006 Dodge Ram rear Bed
Wadeson has owned several Ford and Dodge trucks in the past and has gone through enough automatic transmissions to last him a lifetime. When he ordered the Mega Cab, Wadeson specified a G56 six-speed manual to stand up to the 20,000-pound loads this truck is often required to pull. The transmission was supplemented with a South Bend double disc clutch and upgraded hydraulics. Behind the transmission the stock NV 273 transfer case and axles were retained, though the differentials now wear Mag-Hytec covers for increased fluid capacity.

View Photo Gallery | 15 Photos
Photo 8/15   |   2006 Dodge Ram highway Smokin
ROLLING STOCK TO MATCH THE POWER
The axles are capped by distinctive Rickson 19.5x6-inch steel rims, fitted with 245/70R19.5 Michelin H-rated tires (XZEs in front and XDEs in the rear). The tire and wheel combination doesn't flinch at even the heaviest loads and leaves additional room for brake cooling. The four-wheel disc brakes were left stock, but are supplemented by a Pacbrake exhaust brake fitted in the exhaust stream. Additional payload capacity comes from the rear Firestone airbags, which work in conjunction with a Lorenz Industries suspension system that includes Bilstein 5100 shocks.

View Photo Gallery | 15 Photos
Photo 9/15   |   2006 Dodge Ram rear Bumper
Paint-matched TrailReady bumpers sit at each end of the truck and are constructed from 3/16-inch steel. The front bumper houses four Lightforce Lance 140 lights and a 12,000-pound Warn winch wrapped in Winchline synthetic cable. The rear bumper is outfitted with high-power backup lights to make connecting and disconnecting the trailer a snap-even at night. The gooseneck hitch shares space in the bed with a custom 55-gallon diamond plate auxiliary fuel tank capped with a toolbox that sits flush with the bed rail.
NEVER DONE TINKERING

View Photo Gallery | 15 Photos
Photo 10/15   |   2006 Dodge Ram left Front View
Were all of these upgrades necessary? Probably not, but the end result is a truck that can pull the team's two Twisted Customs rock buggies up the steepest grades with low EGTs and keep the Rock Runner Racing team in limousine-like comfort. And unlike a dedicated semi truck, the Mega Cab is still perfectly capable as a daily driver. With nearly 60,000 miles already on the odometer of his '06 pickup, Wadeson has plenty of seat time in his Mega Cab and says that he would not change a thing. Well, maybe a few more horsepower, but that's all...