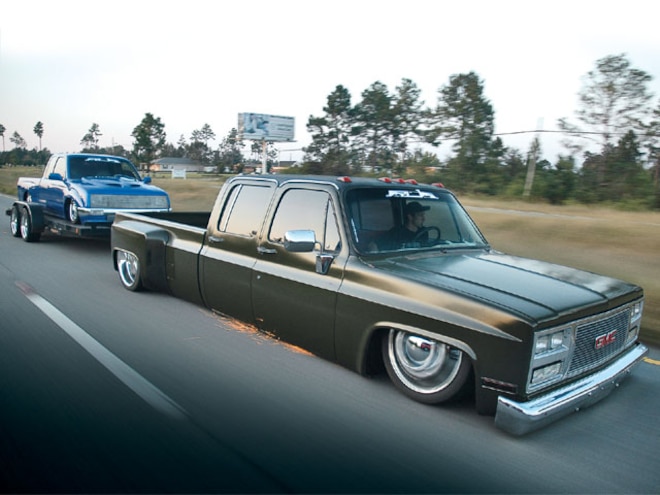 View Photo Gallery | 3 Photos
Photo 2/3   |   1989 Gmc hauling
Chase Shiver is not one to mess around when he wants to get things done. If he wants a large tow vehicle to drag body, he will make it happen. To do so, Chase runs his own shop called Real Life Customs where he dedicates all his spare time to building kickass trucks. Back in the April '07 issue of Sport Truck, we featured another one of his trucks that was photographed in this very shop. That '82 Chevy C10 was his first truck and the guinea pig for developing his fabricating skills.
After working on that truck and many others, Chase wanted a big truck to be able to tow his rides and some of his friend's trucks as well. He was already a fan of GM's square-body trucks and wanted to get a dualie version. On a tip from a friend, he found this '89 GMC for sale on the side of the road. All it took was a few thousand bucks and a set of tires for Chase to become the new owner of this big hauler.
When he first got the truck, it was well-equipped with all the mail-order accessories, including pushbars up front, running boards on the side, and a windshield visor. All that stuff was removed, and a 3/4 drop was added to clean up its appearance. Also, the truck had grab bars near the doors that caused some rusting around their mounting points. Chase took the bars off and repaired the damaged sheetmetal.
To lay the truck's frame flat on the ground with stock rollers, Chase used 2,600- pound ContiTech airbags up front and a two-link fitted with Firestone F9000 airbags out back. He did all fabrication and installations within two weeks before a major show. Once the suspension was wrapped up, the truck was loaded and took a ninehour trip to the show without a testdrive. 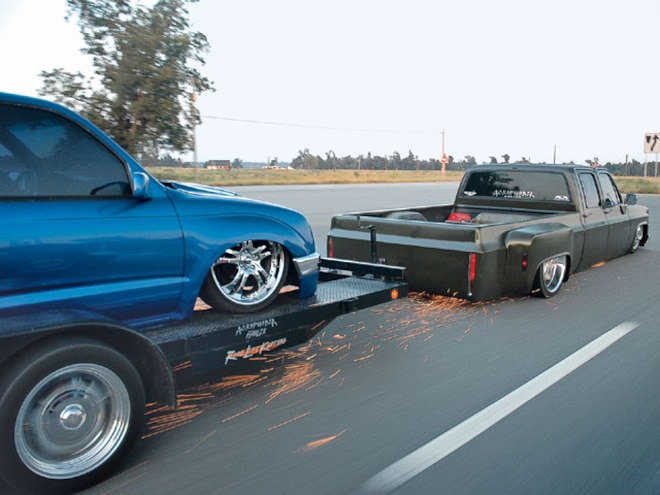 View Photo Gallery | 3 Photos
Photo 3/3   |   1989 Gmc rear View
During that long trip, Chase realized that the 454-cid big-block under the hood sucked gas like it was nothing. To fix this major dilemma, he got himself a fuel-injected 350-cid small-block and a five-speed manual transmission to swap in. Around the time he installed the new motor, Chase figured he might as well replace the frame section under the cab with 2x4-inch steel tubing and body-drop the truck. After three hours installing a Painless Performance wiring harness, he turned the key and the engine fired right up.
Even though it was ready to drag rockers on the highway, Chase felt that his ride needed to be accented with a killer set of Alcoa semitruck rims. The 22.5-inchers were milled down to 22s in order to accommodate the low-profile Pirelli tires. To tuck the wheels between the front fenders, 1/2 inch of material was shaved off the face, and the front control arms were shortened 7/8 inch. Lastly, the truck was covered in U-Tech flat Olive Drab.
Now when Chase tows vehicles to shows, he does so in style. Not to mention, this GMC hauls major ass - six of them to be exact, on two large and comfy bench seats inside the cab.