A Mustang In Truck's Clothing 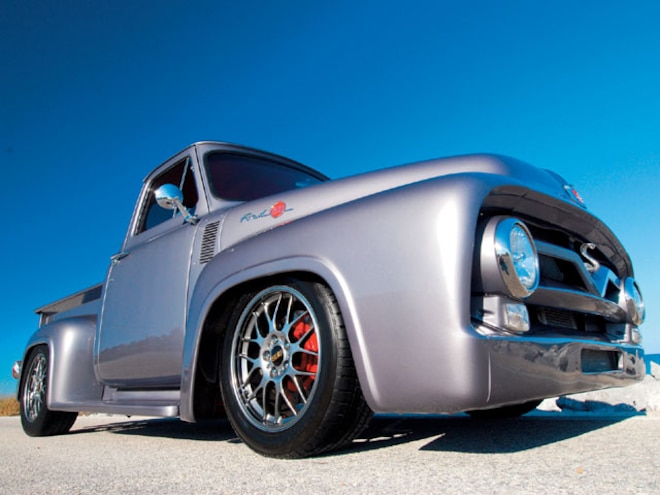 View Photo Gallery | 11 Photos
Photo 2/11   |   1955 Ford F100 right Front
John Maffucci discovered early that racing was in his blood. As a child, he would sit on the curb near his home in Bedford, Pennsylvania, watching the race cars heading for Cumberland, Maryland, on their way to the East Coast SCCA National Championship. John built his first hot rod when he was 14 and started dirt-track racing that same year. From jalopies, he moved on to late-model cars, then after high school, he moved to Daytona, because he was certain someone would hire him. Once reality set in, he became a short-order cook in a bar while awaiting his big break. It took awhile, but he eventually got a factory ride with Mazda in the IMSA Camel GT series and was soon spending quality time in the winner's circle. He moved from road racing in 1996, when the opportunity arose for him to do a Bonneville program with Ford. John took an '03 Mustang Cobra, equipped with Ford's 5.0 Cammer motor, and set a C/P class record of 178 miles an hour. 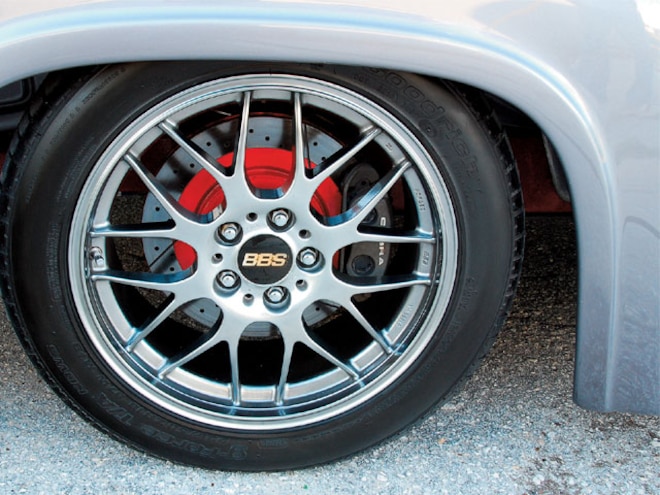 View Photo Gallery | 11 Photos
Photo 3/11   |   1955 Ford F100 bbs Wheels
How does one go from a record-setting Mustang to a vintage Ford pickup? The '55 Ford F-100 in the photos is the culmination of years of experience and not what it seems. Found in an old chicken coop, the truck was originally going to be a shop truck for RPM Ranch, John's fabrication and restoration shop in Dawsonville, Georgia. When Ford got wind of the project and expressed interest in displaying the truck at the SEMA show, everything changed. Transitioning from a "chicken-coop find" to a Best of Show-winning, high-speed hauler took 18 months and the buildup can be seen on the Ford Racing Parts website at www.fordracingparts.com/builds/racingbuilds.asp. The goal during the buildup was to retain the original Ford look, while keeping the performance surprises out of sight. "I wanted the body to be traditional," said John. "The only thing not original is the opening up front for the intercooler and the exhaust out the back." The body sheetmetal, steel fenders, and bed are all Ford, but the bed is the giveaway. One look through the Lexan floor and you begin to understand just how drastically Ford's original design has been modified. In fact, the buildup incorporated the very same record-setting powertrain that put Maffucci's '03 Mustang in the record books. 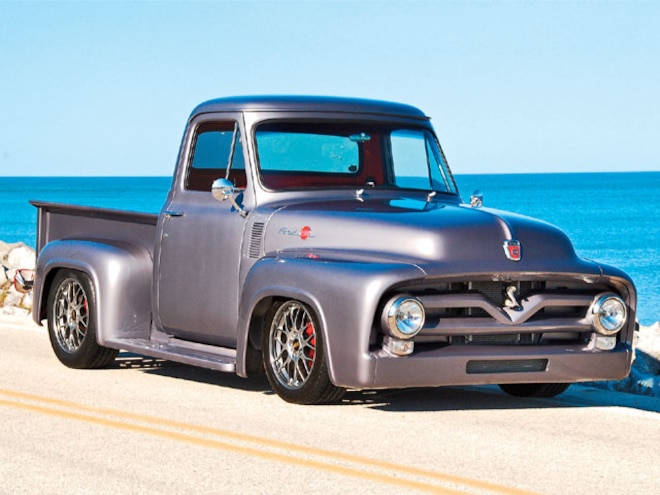 View Photo Gallery | 11 Photos
Photo 4/11   |   1955 Ford F100 front View
Randy Powell of Powell Paint and Body in Dahlonega, Georgia, got the project started by bringing the body back to like-new condition, thanks to cab corners, fenders, running boards, and bed from Dennis Carpenter. Once the body was complete, fabricator Graeme "Rabbit" Bartils from North Georgia Fabrications began updating the chassis by boxing the original '55 framerails and welding in cross bracing. Bright, lipstick-red powdercoating by Evans Performance added beauty to its newfound strength. While cosmetics were important, this truck is not just another pretty face. It had to perform and the suspension work began in earnest. 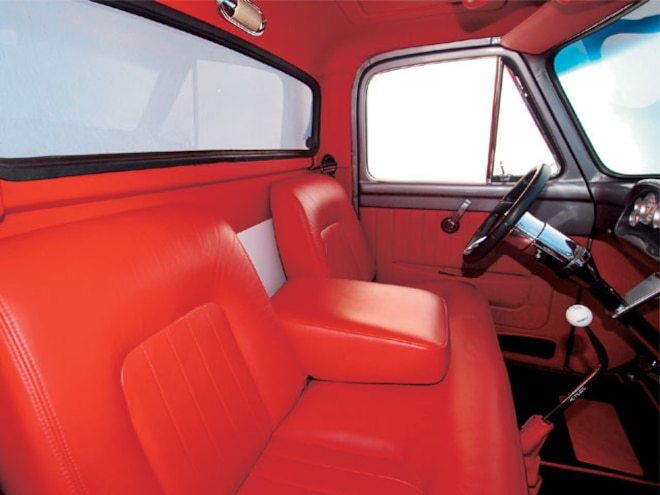 View Photo Gallery | 11 Photos
Photo 5/11   |   1955 Ford F100 seats
The reworked rails were fitted with a Heidt's Mustang II front end, stabilized by Pro Shocks and Eibach Springs. For something genuinely different, John chose the '03 Mustang Cobra independent rearend that came from the Bonneville car. Maffucci said it was amazing how easily the independent rear was adapted to the vintage Ford chassis. Very few changes were required, although they did fabricate new lower control arms to hold the Pro Shock coilovers and rear Eibach springs. Stopping power was enhanced, thanks to some 13-inch '03 Mustang Cobra disks up front and 11-1/2-inch versions in the rear. A Flaming River steering column and wheel control the Mustang power rack and pinion unit. To get the chassis rolling, they chose a set of 18x8-inch BBS one-piece forged wheels with a six-layer Diamond Graphite paint finish. BFGoodrich Comp T/A radials add both looks and traction. The final touch was a Lexan bed floor that has spectators marveling at the unique chassis upgrades.

View Photo Gallery | 11 Photos
Photo 6/11   |   1955 Ford F100 rear View
Power for the truck also came from the record-setting Mustang. The 4.6L Cammer motor was already strong, but the team bored and stroked it from its original 261ci to 306ci. Additional horsepower comes from a long list of traditional hot-rod parts, the most notable of which is an '03 Cobra Eaton supercharger that was ported and polished for optimum airflow and fitted with Metco under-drive pulleys. A mass air sensor from a Lightning truck, Accufab 100mm throttle-body, and a carbon-fiber air induction system from Razors Edge join forces to increase the velocity of the incoming air. Keeping the explosive charge cool is the job of the Fluidyne intercooler, working with the OEM Bosch pump and Autorad high-efficiency radiator. Bosch 55 pound injectors ensure plenty of juice in the air/fuel mixture and the OEM ignition from the Mustang create the series of precisely timed explosions. The final link in the performance chain is the Bassani headers with 2-1/2-inch ceramic-coated exhaust and Borla mufflers. Engine builder Tim Matherly of MV Performance in Statham, Georgia, completed the build, using a Diablo tuner to coax 510 hp to the rear wheels, a dramatic change from the original 290 hp at the flywheel. A Tremec T-56 six-speed transmission with an iconic Hurst shifter gets all the asphalt-buckling torque to the ground.

View Photo Gallery | 11 Photos
Photo 7/11   |   1955 Ford F100 motor
With the power needs attended to, creature comforts were next. The interior continues the Mustang theme using a complete Cobra instrument panel blended into the '55 dash and fitted with Auto Meter instruments. The original, through-the-floor '55 pedals now work a Mustang Cobra Hydra-Boost braking system and a new hydraulic clutch. The beautiful red leather interior, accomplished by Tim's Auto Upholstery in Gainesville, Georgia, is patterned after the elegance of a '55 Bentley with carefully wrapped hides and very few seams. Door panels were stitched to match. Vintage Air with electrically actuated, drop-down air vents keep the dash clean and the cab cool, while the Valentine radar detector mounted in the overhead console keeps John's license safe. A Sony CD player shares space in the console and the 6x9 speakers behind the seats fill the cab with music, assisted by Quiet Ride Solutions sound-deadening equipment.

View Photo Gallery | 11 Photos
Photo 8/11   |   1955 Ford F100 see Through Lexan
How does the completed package work? Even with its legendary aerodynamics, which are just slightly more advanced than a brick, the truck turned 133 mph at the Monster Mile at Maxton, North Carolina; the East Coast Timing Association's version of the Salt Flats. John soft-pedaled the truck, because speeds more than 135 miles an hour need a roll cage; but his goal is to eventually take the truck somewhere in the mid-170s. However, straight-line performance is only part of this truck's accomplishments. The independent rear, fitted with 3.55 gears, is so effective the F-100 can outperform most vehicles designed for autocross. At the Goodguys show in Nashville, there were 720 passes made on the course with two classes, one for hot rods and the other for muscle cars. The truck posted the fastest time in the hot-rod class and was only 0.7 seconds slower than the overall winner, a twin turbo Camaro! But wait, there's more.
Not only does John drive it on a daily basis, this truck is equipped with a trailer hitch. It came in handy when John's motor-home broke down when he was towing the truck and trailer back from Maxton. The wrecker picked up the big motor-home and the F-100 towed its own trailer home. This multifaceted Ford will soon become a full-time tow truck, hauling John's next Bonneville Mustang to the Salt Flats. The energetic Effie has also become a regular on the show circuit and usually walks off with the top prize, even capturing two Best of Show trophies at Mustang events. As a work truck, a tow truck, a Best of Show winner, an autocross winner, and Land Speed record holder, you can't ask for much more than that. Henry would be proud.