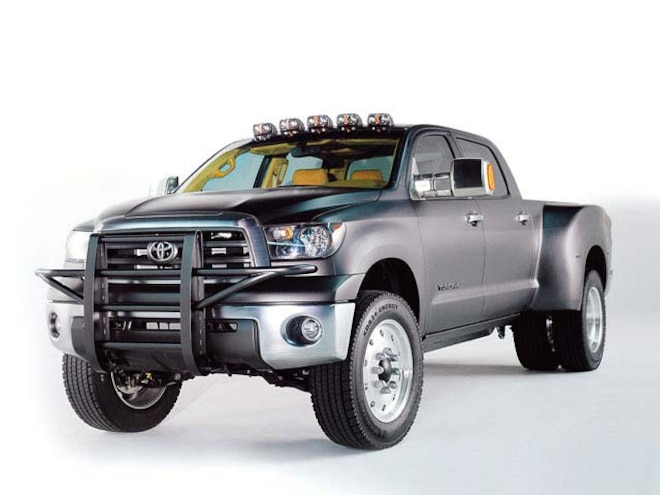 View Photo Gallery | 11 Photos
Photo 2/11   |   2008 Toyota Tundra Diesel front Left View
It's been 15 years since Toyota brought the T100 (its first so-called "1-ton" truck) to the U.S. with just 150 hp under the hood. Since then, the truck evolved into the Tundra, which was considered by many to be a 9/10-ths scale model of a fullsize American pickup. Then, after years of testing our domestic market and taking over the compact truck segment with the Tacoma, the world's richest automaker decided to make the Tundra fullsize for 2007-and gave it dual rear wheels and an 8.0L Hino inline-six turbodiesel engine for the SEMA show. 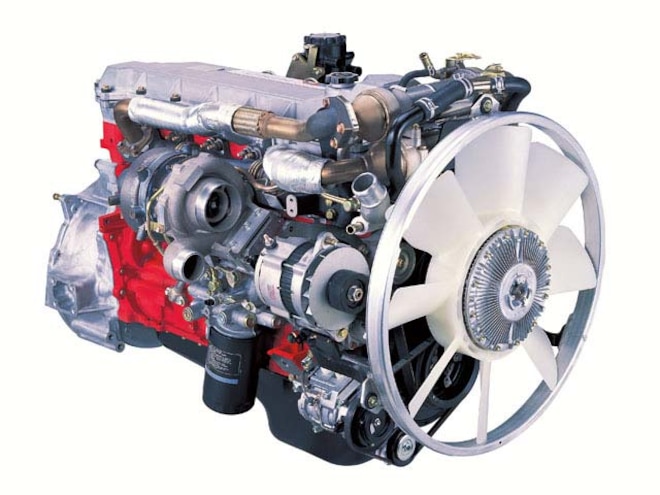 View Photo Gallery | 11 Photos
Photo 3/11   |   The 260 hp and 585 lb-ft ratings may seem low, but those numbers are for 35,000-pound GVW trucks.
Toyota Diesel Power
The massive 488-cubic-inch Hino J08E-TB turbodiesel in this Tundra is no Cummins, Duramax, or Power Stroke. It was designed for delivery trucks that haul with a GVWR of 35,000 pounds, and has a power rating of 260 hp and 585 lb-ft of torque without any modifications, which would be more than enough grunt to move the Tundra chassis along with a 20,000-pound trailer. Just like the engines in modern 1-ton diesels, the J08E-TB uses common-rail fueling, a variable-geometry turbo, an electronically controlled intake throttle, and twin EGR coolers to lower NOX emissions. Unlike the stock engines in the delivery truck applications, this one gets to breathe through a free-flowing 4.5-inch Magnaflow exhaust that reduces EGT while towing, and sweetens the sound whenever the Hino is fired up. 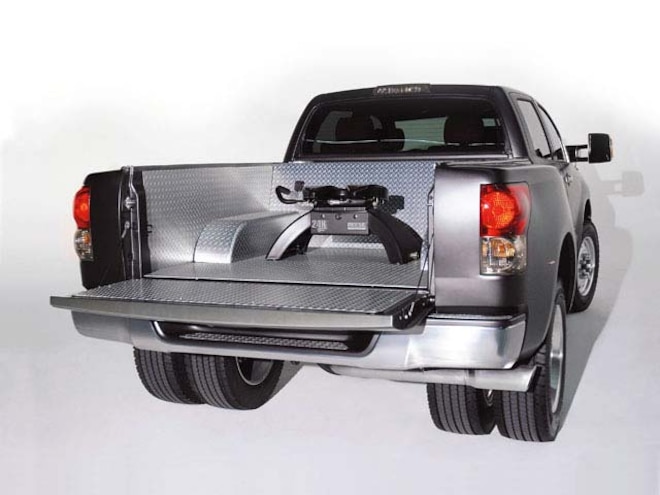 View Photo Gallery | 11 Photos
Photo 4/11   |   2008 Toyota Tundra Diesel open Bed
5-Speed and HD Axles
To deal with the torque of the large displacement diesel, the Toyota Motorsports Technical Group drastically modified the drivetrain. A heavy-duty Eaton 5-speed manual is used to transmit the massive amounts of torque from the engine back to a Meritor axle that uses "Hypoid-Generiod" gearing for strength and quiet operation, plus it can be equipped with a remote-actuated locking differential.

View Photo Gallery | 11 Photos
Photo 6/11   |   2008 Toyota Tundra Diesel rear Right View
22.5-inch Dual Rear Wheels
To make the Tundra look like a true 1-ton truck, a 6.5-foot bed was fabricated with fenders for dual rear wheels, and 22.5x9-inch 10-lug Alcoa brushed aluminum rims were mounted at all four corners, along with large drilled brake discs up front. The wheels are wrapped in Michelin XDA 2+ Energy 295/60R22.5 tires that have strong sidewalls for towing and are designed with low-rolling resistance to maximize the dualie's mpg.

View Photo Gallery | 11 Photos
Photo 7/11   |   In this configuration, the 8.0L Hino makes 305 hp and 610 lb-ft of torque.
Mad Max Paint and Hand-Sewn Leather
SEMA trucks have to look good to get any attention at the annual aftermarket parts show, so the Toyota Motorsports Technical Group decided to use what it calls a "Road Warrior" exterior theme, along with a luxurious interior. The menacing look is due in large part to the Matte Charcoal Metallic paint that makes the Tundra look like it could be used to transport a SWAT team. Low-profile LED clearance lamps are recessed-mounted into the dualie fenders and the tailgate, and a set of four PIAA P-4000 Quattro driving lights are mounted on top of the cab to make sure the Tundra diesel is always seen. The exterior of the truck was also upgraded with generous helpings of diamond plate lining the entire cargo box and AMP Research powered running boards. Other exterior touches include bright satin brushed nickel on both bumpers, the grille surround, telescoping trailer mirrors with built-in turn signals, and dark brushed Tundra emblems.

View Photo Gallery | 11 Photos
Photo 8/11   |   2008 Toyota Tundra Diesel right Side View
The interior also had to be up to SEMA standards, so everything was wrapped in ginger leather with French stitching, a matching suede headliner was installed, and satin brushed nickel can be found on the AC controls, door handles, and other trim pieces. To complete the interior, a Kenwood touch-screen DVD player and navigation system with dual rear-seat entertainment was installed along with Kenwood speakers and amplifiers.
'09 Toyota Tundra Dualie Diesel?
So, does this mean that you'll be able to walk into a Toyota dealership later this year and drive home in a Tundra dualie with a turbodiesel under the hood? Probably not. This truck was built for SEMA to gauge customer interest in oil-burning 1-ton Toyotas here in the U.S.A., but it's far from a production vehicle. Toyota took a decade and a half to make the jump from midsize trucks to 1/2-ton pickups, so we don't expect them to jump into the diesel deep end of the fullsize truck market while the domestics are still figuring out how to meet the new EPA regulations that are going into effect. After the strict 2010 rules become law though, we won't be surprised if Toyota looks at Chevy, Dodge, and Ford and says, "Game on!"