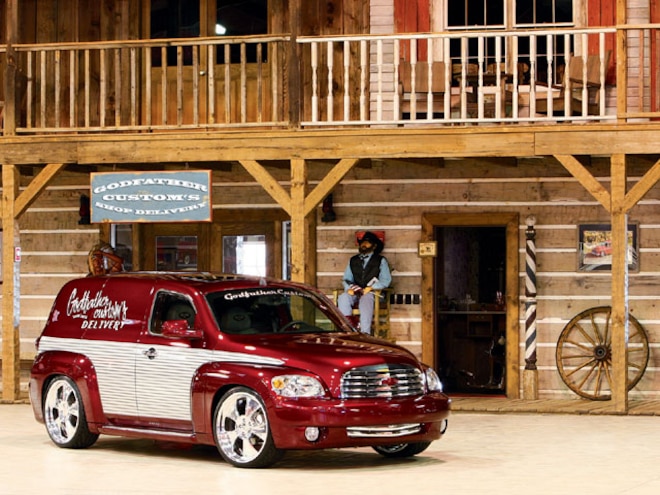 View Photo Gallery | 13 Photos
Photo 2/13   |   2008 Chevy Hhr Panel right Side View
During the early days of custom rod shops, it seemed everyone had a cool shop panel truck that was tricked out. tricked out meant wheels and tires, lowered, and painted with the shop name scripted in gold leaf on the panel. Chevrolet introduced the Heritage High Roof (HHR) in 2005. the nostalgic-appearing cruiser received its styling from an early-model '49 Suburban, so what better ride for a shop truck than an HHR, right? 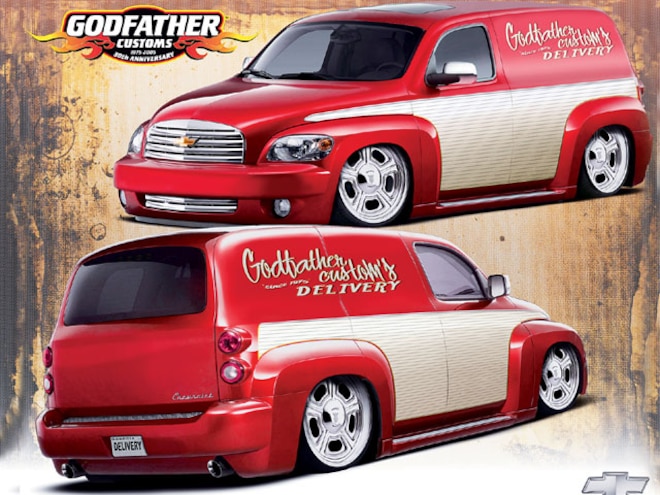 View Photo Gallery | 13 Photos
Photo 3/13   |   2008 Chevy Hhr Panel godfather Customs
Hal Johnson has been the proprietor of godfather Customs in Decatur, georgia, since 1975. known as one of the leading customtruck aftermarket manufacturer out- lets, Hal is also well known for his insane godfather's custom truck and SUV fleet he has acquired throughout the years. many of the godfather's sizzling hot rollers have been featured on numerous pages of past truckin' issues. 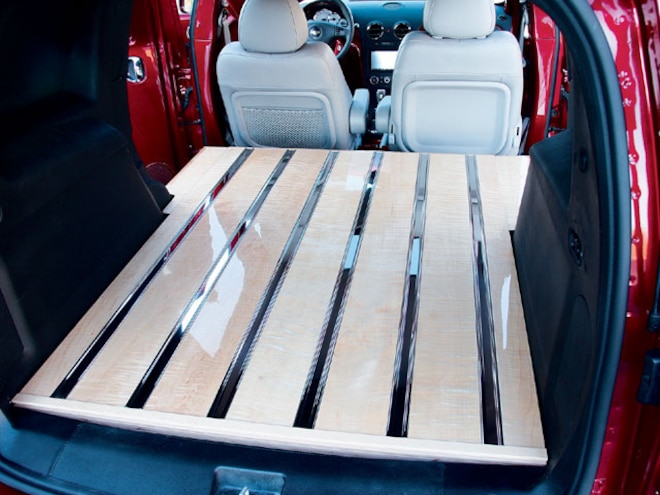 View Photo Gallery | 13 Photos
Photo 4/13   |   The rear cargo area was enhanced by installing an awesome bed wood and Parts wood floor with white oak planks and polished stainless steel stringers.
Check out this latest custom creation from godfather's stable, an '08 Chevy HHR Panel Lt. the front and rear static ride height was lowered 1-inch up front and 1.6 inches in the rear, using Eibach springs. A set of bonspeed 20x81/2-inch polished billet aluminum wheels were wrapped in 245/30R20 bFgoodrich rubber on all four corners. underneath the hood is a stock 2.4L Ecotec, equipped with a CgS intake and CgS 21/2-inch single into a dual-exhaust system with over-sized stainless steel tips. it produces a little more than 180 hp. the body's aerodynamics were improved by godfather's custom one-off front and rear bumper covers.

View Photo Gallery | 13 Photos
Photo 6/13   |   2008 Chevy Hhr Panel interior Door
With all of the body mods completed, the HHR was delivered to mark manheim in Jonesboro, georgia, where Alan Richards applied multiple coats of House of kolor kandy Red. the white and gray lined side panels were also done by Donnie keller, who used his steady hand to layout the godfather Custom's script and delivery in uppercase block lettering on the panel portion. The running boards are protected with a pair of custom-milled Rhino manufacturing step plates. many of the interior surfaces were sprayed with Alsa paint. Also, help came from painters kody Compton, Shane Dorrity, Alan Pinkum, and Phillip mcCurity. then, work moved inside of the vehicle.

View Photo Gallery | 13 Photos
Photo 7/13   |   The lowered stance was accomplished by installing Eibach Springs, 1 inch in the front and 1.6 inches in the rear. House of kolor kandy Red was applied by Allen Richards at mark iii Customs in Jonesboro, georgia.
The team at gibbs upholstery in Jonesboro, georgia, installed the katzkin light gray with dark gray leather insert seat covers. they also laid up an all-suede headliner and rear side panels that wrap the interior walls. A beautiful wooden floor, courtesy of Bed Wood & Parts, from Hopkinsville, georgia, was laid down in the back, giving it a truly nostalgic flavor. The factory instrumentation was replaced with US Speedo gauges. A kenwood DnX7100 head unit is power induced, with a kenwood kAC-X1R amp, while the kenwood kFC-Xw1200F 12-inch shallow subwoofer is powered up with a kenwood kAC-X4R.
The amps and sub are lo- cated in a godfather's custom-built enclosure under the bed floor. A push of a button on the key-fob motorizes the bed floor forward, revealing the audio equipment. Inside, the mids and separates are juiced by a Kenwood kFC-X1710 amp. A 17-inch Directed monitor was in- stalled for visual entertainment. A viper gPS tracking unit was installed, along with a viper SSt alarm. All of the audio components were linked to one another by Singer wire and connectors from Amp of America.
Hal's HHR Panel gives us a taste of a shop hauler from the past, blended with current, cool custom components and styling to create a parts chaser of today.
Truckin' magazine and godfather Customs would like to give a special thanks to our friend, milton Robson, for allowing us to use his wonderful indoor photo location. Also, thanks to the entire godfather Customs crew for their dedication to this project.