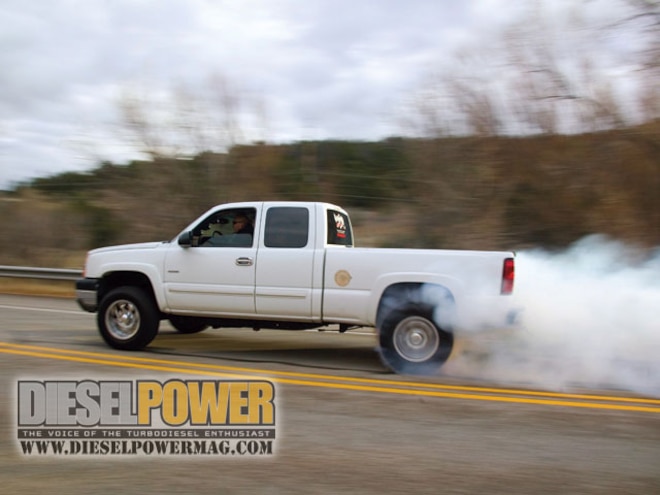 View Photo Gallery | 17 Photos
Photo 2/17   |   We didn't have to ask twice for Newly Tolf to light up the tires. With over 1,200 lb-ft of torque on tap, getting them to spin is easy.
Diesel trucks are becoming more common in urban areas, but they have long been the cornerstones of transportation in rural areas like the Four Corners region of the U.S. Newly Tolf is a pipeline operator in Farmington, New Mexico, and he uses his '04 Chevy Duramax truck for everything from hauling pipeline equipment to drag racing. When he isn't racing or working in the oil fields, Newly runs Underground Diesel Performance and uses his truck as a test bed for new parts.
Under The Hood
ARP head studs are the only internal addition to the LB7 Duramax engine, even though it has 170,000 miles and countless quarter-mile passes and dyno pulls on it. Nearly everything ancillary to the engine has been replaced or upgraded. 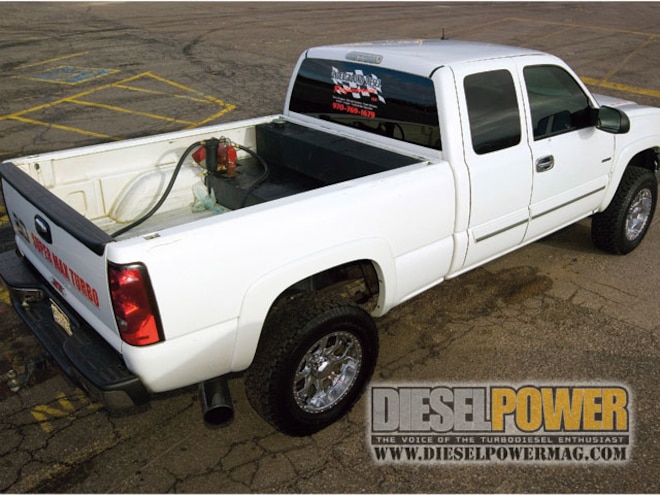 View Photo Gallery | 17 Photos
Photo 3/17   |   An 85-gallon transfer tank is fitted in the bed and used to fuel-up heavy equipment. The weight penalty doesn't seem to adversely affect Newly's times at the track.
The stock fuel system was replaced with -10 AN (5/8 inches) fuel line and an Underground Diesel Performance high-flow fuel filter and regulated return line. Diesel fuel travels from a PPE billet fuel pickup through a PPE adjustable lift pump to the stock CP3 injection pump and injectors. The fuel is mixed with air that is fed through an AFE intake and BD Power Super Max turbocharger pushing 45 psi of boost. When the force-fed air is not enough, an NX nitrous system is put into action. Spent gases then flow through a BD Full Bore exhaust manifold and out of an MBRP 5-inch turbo-back exhaust.
Big Numbers At The Track
Of course, modern diesels need more than hard parts to make big power; the proper electronics are crucial to getting the most from a Duramax engine. Tolf uses EFI Live programming, with custom tuning by Tony Martino at Ridge Runner Diesel Performance, in conjunction with a 5,000 rpm rev-limiter. The combination has yielded 771 horsepower and 1,543 lb-ft of torque on a Dynojet and quarter-mile passes of 12.8 seconds at 106 mph on the drag strip. On diesel fuel only, the truck still makes an impressive 578 horsepower.

View Photo Gallery | 17 Photos
Photo 7/17   |   A PPE lift pump plumbed with -10 AN (5/8-inch) line allows fuel pressure to be adjusted to suit Newly's needs. He reports that the addition of the lift pump helped him drop three tenths of a second in the quarter-mile.
Making The Drivetrain Live
Chevy trucks come with stout drivetrains, but when you are racing and making twice as much horsepower as stock, things are bound to break. The Allison 1000 transmission was upgraded after Newly fried it while romping in the dunes at Glamis. He limped the truck to PPE and had them install an ATS Five Star billet torque converter and deep pan with PPE's Stage V transmission kit. The new PPE components include an upgraded valvebody, new power valve, and additional clutch discs. An ATS Co-Pilot increases the line pressure to the transmission and increases torque capacity. Behind the transmission, a Sun Coast brace was added to a factory replacement tailhousing, between the transmission and the transfer case, after the original tailhousing cracked during a hard launch.
Downstream from the transfer case, the factory axles were retained, including the stock 3.73 gear ratio and rear Gov-Loc differential. The steering, however, is a known weakness on the GM trucks and has undergone significant upgrades. ATS tie rod sleeves and Cognito Motorsports pitman arm and idler arm braces keep the front tires pointed straight during hard launches in four-wheel drive. Bilstein 5100 shocks smooth out the ride, and Firestone air springs level the truck when it is put to work during the week. The 18-inch Helo Maxx 8 rims and 33-inch BFGoodrich All-Terrain tires work well in all conditions--whether towing, racing, or working in the field.
All Around Winner
Other additions to the truck--like the 800-watt stereo system, the 85-gallon transfer tank in the bed, and the rearview camera system--make the GM more practical and enjoyable to drive regardless of the occasion. That is what makes diesel trucks so appealing, regardless of whether you live in a rural or urban area. As Newly has demonstrated, the same vehicle can be used to haul things in the bed or haul down the track. Tow trailers or go toe-to-toe with muscle cars. What more could a person need?