Building what never was 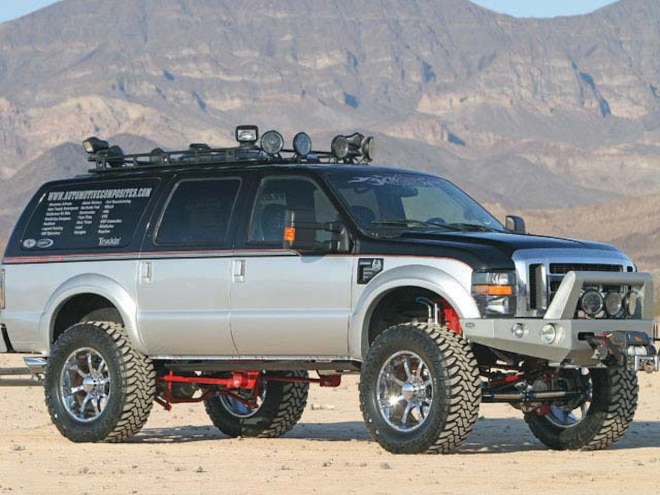 View Photo Gallery | 9 Photos
Photo 2/9   |   2000 Ford Excursion Custom right Side View
Michael and Millie Van Steenburg have built several ground-up concept vehicles through their business, Automotive Composites, but getting this Excursion ready for the 2007 SEMA show proved to be just as much of an adventure. Beginning in July, the Garden Ridge, Texas, couple started with an '00 Ford Excursion. The goal was to build a vehicle that would garner a lot of attention, which is not an easy feat when you're surrounded by hundreds of other vehicles with the same goal. 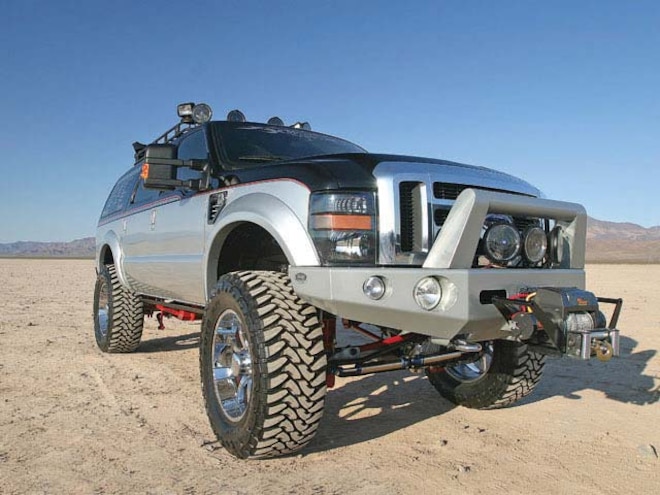 View Photo Gallery | 9 Photos
Photo 3/9   |   2000 Ford Excursion Custom buckstop Front Bumper
Ford never built an '08 Excursion; slow sales caused Ford to halt production in early '07. But, when Michael and Millie saw the new front sheetmetal treatment Ford gave its '08 Super Duty, they knew they'd found a way to raise the bar with their Excursion. The entire front clip, including hood, fenders, grille, and headlights from a Harley Davidson Edition Super Duty were bolted on. The underlying support structure is also different for '08, so there's more than just the bodywork you see, as it actually has the core support from an '08. Bushwacker fender flares, an '08 Super Duty in front, and an '00 Excursion in the rear, added some width, while a Buckstop front bumper and a Mile Marker winch gave the truck a take-no-prisoners look. With all of the sheetmetal in place, Legend Painting in San Antonio, laid down the black and silver paint, as well as the black, red, and silver striping. 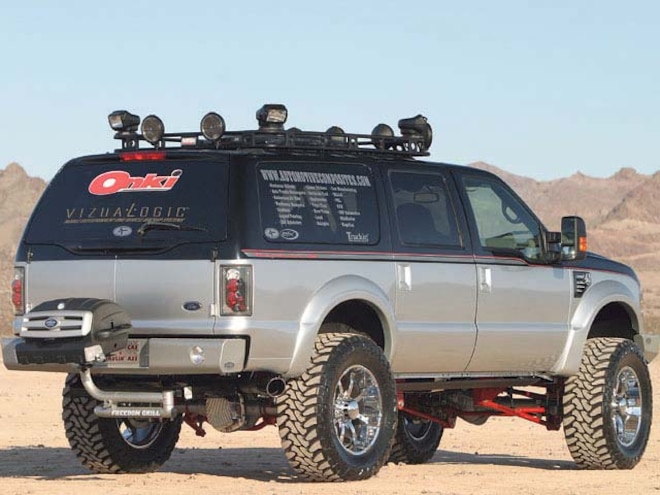 View Photo Gallery | 9 Photos
Photo 4/9   |   2000 Ford Excursion Custom rear Right Side View
With a huge winch in front, it was only logical to lift the truck, so Michael and Millie left the truck in the trusted hands of Maximum Altitude in San Antonio, where an adjustable Kelderman lift kit was installed. Both of the axles ride on four-links that lift the truck between 6 and 12 inches, depending on how much air is in the Kelderman airbags. The additional height gave the Excursion plenty of room for 40-inch Toyo Open Country M/T tires and the 22x11-inch MKW Type 26 wheels. Cross-drilled and slotted TKW rotors were also added to help slow the 3-plus tons of SUV.

View Photo Gallery | 9 Photos
Photo 5/9   |   With the new and improved front clip, an intimidating bumper, and Hella driving lights, this truck means business.
Powering the massive Excursion is a 6.8L V-10, which was fitted with a cold air intake, Gibson stainless headers, and an MBRP exhaust. Two Optima YellowTop batteries provide both starting power and audio power, and were relocated to the cargo area of the SUV. Those batteries are needed, as the cargo area also holds a 42-inch Samsung LCD, that is connected to a PlayStation 3 and the KVH Industries satellite, which creates digital TV reception anywhere. Two amps, totaling almost 2,000 watts, also rely on the batteries, and power two subwoofers mounted in the rear doors, as well as the mids located in the front doors.

View Photo Gallery | 9 Photos
Photo 6/9   |   2000 Ford Excursion Custom 22 Inch Mkw Wheels
Moving into the driver seat, you'll see the command center for the audio, a JVC DVD head unit. Other touches include the BAD tribal-flame steering wheel that replaced the factory piece, as well as white-face gauges, and custom door panels. To match the two-tone exterior, the driver-side dash and glovebox door have been dyed black. You'll find more black on all of the seats, and the headliner, thanks to 360 Custom Upholstery, also in San Antonio, which wrapped the seats in ostrich and reptile-textured leather.
In just three months, one run-in with attempted thieves, and a tow vehicle mishap, the Van Steenburgs were done. They accomplished their mission, however, as their one-off truck did make us do a double-take. They built what had never been done before.

Truckin
Truckin
That’s a Wrap- The Devious Excursion, Part 3
Installing a Tough Country Bumper and Wrap on an ’01 Excursion
Anthony Soos – Nov 23, 2016
Truckin
Truckin
Dental Work: 2015 Super Duty Front End Swap on an Early Excursion
Why just fix something back to stock when you can trick it out with a new...
Anthony Soos – Oct 27, 2016
Truckin
Truckin
Devious Customs Installs a 6-inch Fabtech lift on a 2001 Ford Excursion
Travel with us to Devious Customs in Riverside to see how we transformed ...
Anthony Soos – Aug 10, 2016
Diesel Power
Diesel Power
What Happens When a 600hp Cummins and an Allison Transmission Come Together in an 2004 Ford Excursion
Marshall Davis had what seemed like a simple problem: He wanted a diesel ...
Jason Sands – Jun 17, 2015
Join Our FREE Truck Trend Network Newsletter