If Godzilla Built An Isuzu 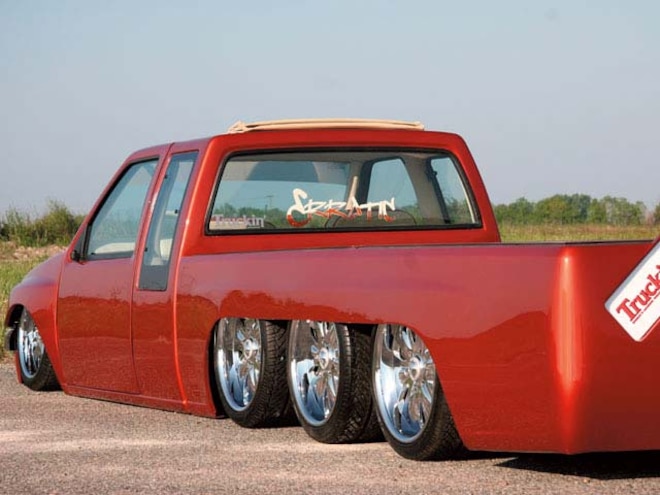 View Photo Gallery | 11 Photos
Photo 2/11   |   8 Wheel 1989 Isuzu Pickup rear View
At first glance, you have flashbacks to `93 when triple-axle minis ran rampant, checker-paint schemes were in, and if your truck had 15s, you were the top dog. Only, it's not '93 and this Isuzu is too clean to be from that era. No, this truck belongs to a man whose vision went extreme. Steve Francis of Montgomery, Texas, is the proud owner of a truck he describes as "a truck that stands out." We agree with Steve, and think a body-dropped Isuzu with eight wheels is pretty cool. 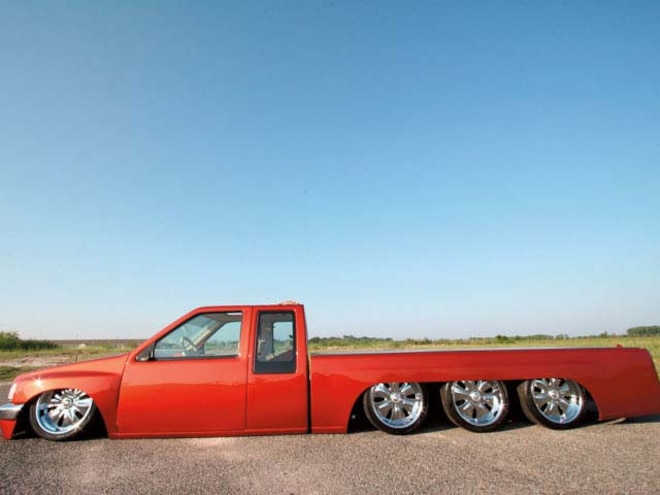 View Photo Gallery | 11 Photos
Photo 3/11   |   8 Wheel 1989 Isuzu Pickup side View
Beginning the project three years ago, Steve set out to build something different that could help represent his detailing company. Starting with the chassis mods, Fresh Rydes in Spring, Texas, added 2-inch Chassis Tech lowering springs, Rocky Fox built custom upper control arms, and Slam Specialties airbags were bolted in. A fully boxed custom 4-inch narrowed frame was welded to the chassis, under the cab to accommodate the coup de gras, six 18-inch wheels in the rear. Each rear axle is two-linked with Panhard bars. Each axle also received its own Toxic shocks and two of the axles were suspended by Slam Specialties airbags. The rear frame and suspension setup was built by Rocky Fox, as well as the modified driveshaft. Eighteen-inch Boss wheels were wrapped in 225/40R18 tires, and when Steve left the wheel shop, he had two complete sets in his possession.
Powering the Isuzu is a small-block Chevy 350ci V-8, which was assembled by Jessi's Automotive. Block-hugger headers fit the en-gine easier, and the 700-R4 trans-mission has no problem turning the six rear wheels. The engine's block was painted and many bolt-on items were ordered in chrome. Finishing off the en-gine bay, the entire firewall was shaved.
Creating a really unique look, Word of Mouth Customs, who performed the bodywork, also suicided the doors and cut a hole in the roof for a sliding ragtop. Moving to the bed, the sides and tops were extended to 11 feet to accommodate the triple rear axles. A 42-inch LED on top of the roll pan acts as a brake light and the license-plate box was angled to complete the old-school look. Kenny Fitzsimmons of Word of Mouth Customs applied the Tangerine Pearl paint, until Steve smiled ear to ear. Inside the suicide doors is just as custom.

View Photo Gallery | 11 Photos
Photo 10/11   |   We're not great at math, but that doesn't look stock.
You may have noticed the crazy body of the '89 Isuzu. Yes, the truck is 19 years old, even though most of the front end parts are from a donor '95 truck. Steve tore the truck apart and performed the 3-inch body-drop himself. Then decided, once he was piecing it back together, to update the truck's look. First off, he bolted on a set of Amigo fenders, added a '95 Rodeo chrome grille, Rodeo bumpers, and headlights. Other body mods included shaving the door handles, wiper cowl, body lines, and tailgate.

View Photo Gallery | 11 Photos
Photo 11/11   |   8 Wheel 1989 Isuzu Pickup front Side View
A shaved dash was wrapped in bone suede, matching the bone suede and tangerine vinyl-wrapped seats. Each door panel was also wrapped to match. Mark's Custom Upholstery handled the interior.
Steve succeeded in creating something different. His truck stands out in a crowd of cus-toms as one of the wildest, yet cleanest trucks at any show.