This '58 was a true test of patience 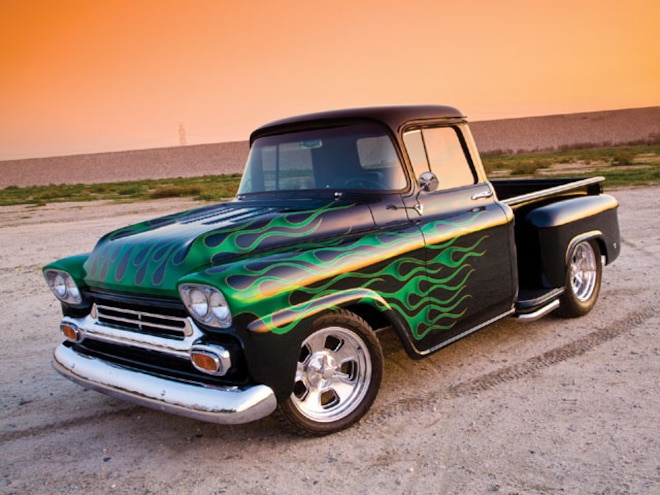 View Photo Gallery | 8 Photos
Photo 2/8   |   1958 Chevy Apache Half Ton Truck front Left View
DeJuan Taylor is a pretty upbeat guy. Given the hell that he was put through during the buildup of his '58 Apache, you'd think he'd be a bitter SOB, but he's not. After all of the misrepresentations, missed deadlines, shoddy work, and other minor catastrophes he endured, he says he wouldn't change a thing because experience is the best teacher. His truck building experience lasted a long time, but the result is one badass classic ride that more than makes up for the drama.
DeJuan has been building this truck for 26 long years. The story begins with DeJuan falling in love with his neighbor's '55 Chevy 1/2-ton truck and wanting to build his own. The '58 Apache is a pretty rare truck, not because of the Apache designation (that moniker was applied to all '58s), but because most of these trucks were driven hard and put away wet. They were workhorses, and they're difficult to find in restorable shape these days. Although he practically stole this one for a mere $75, it wasn't without its share of problems. 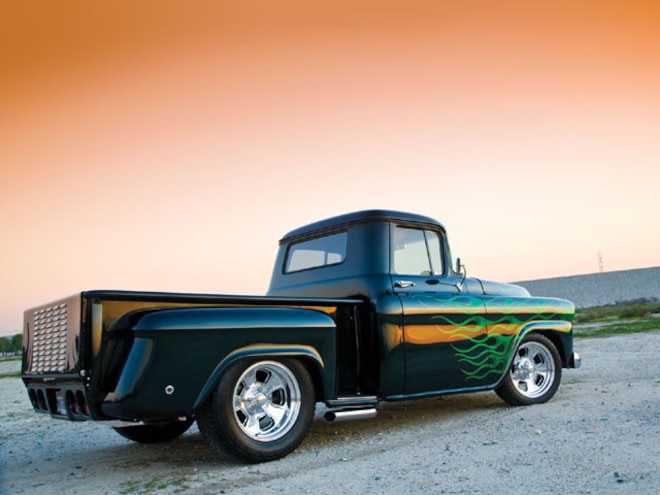 View Photo Gallery | 8 Photos
Photo 3/8   |   1958 Chevy Apache Half Ton Truck rear Right View
DeJuan had a pretty good idea of what he wanted in a custom sport truck, but he lacked the experience of a seasoned builder. Consequently, the first go-round of this truck's build wasn't the grand experience most of us envision. Sure, the truck received a custom paintjob, interior, and engine, but the work wasn't up to DeJuan's standards. When his kids arrived, he didn't have the time or money to rebuild the truck again, so he just cruised it on the weekends when he found the time. As the years went by and DeJuan's medical staffing business bloomed, the kids got a bit older and he indeed found the time to not only rebuild this Chevy but also another.
The truck's build got going once again in 2003 with the powerplant. Originally a 454-cid big-block V-8, the engine went through a couple of incarnations before finally arriving at a Pro Stock level of 500 cubic inches. Amos Satterlee Performance Engines would be the last shop to touch the blower motor, overboring the '76 vintage iron block and adding an Eagle stroker crankshaft. The short-block was topped with a pair of Merlin heads, a Chet Herbert camshaft, and then an 8-71 Hampton roots-style supercharger. Fuel comes from a pair of polished Edelbrock blower carbs, which are fed via a Barry Grant fuel pump. An MSD ignition system lights off the mixture, which is spent through Doug's Headers Magna XL Performer Series pipes. 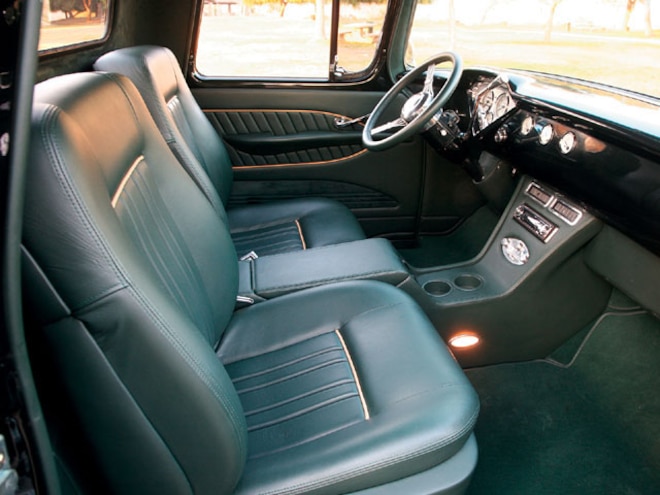 View Photo Gallery | 8 Photos
Photo 4/8   |   1958 Chevy Apache Half Ton Truck interior
Amos has a rep for streetable power, so the engine is no slouch. Even at 8 pounds of boost, DeJuan's truck will smoke the rear skins with ease. The power is transferred to the rear wheels by a GM TH400 trans with a Continental torque converter, and then a 12-bolt rearend. All of that torque is put to the pavement through Billet Specialties Legacy wheels and Yokohama AVS S/T 285/60ZR18 tires.

Next, the truck was dropped using a tried-and-true front-suspension swap. The stock front clip was cut just ahead of the firewall by Williams Chassis and replaced not with the traditional Camaro clip but with one taken from a '78 Pontiac Trans Am. The new clip netted the truck disc brakes and IFS, and the factory straight axle and drum brakes were trashed. With all of that power on tap, we're glad to see the upgrade because not only does the truck handle better without the straight front axle, but it will now stop on a dime with the disc brakes. The swap also had an added benefit: The step-up in the IFS clip automatically lowers the truck a couple of inches, and DeJuan was also able to install 2-inch drop spindles and tubular aftermarket control arms. 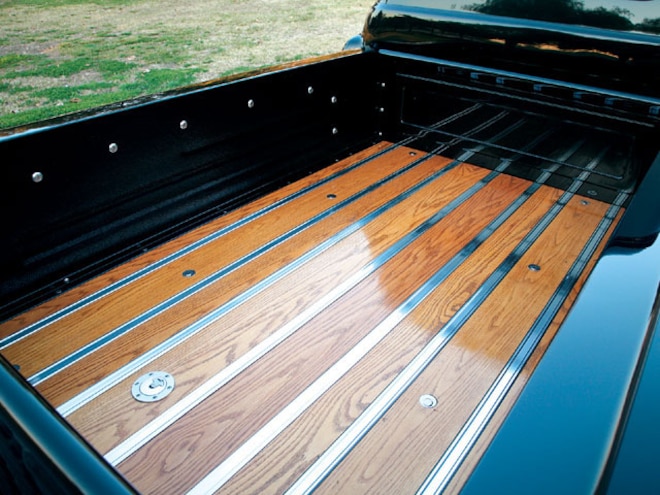 View Photo Gallery | 8 Photos
Photo 5/8   |   1958 Chevy Apache Half Ton Truck truck Bed
Out back, the factory 12-bolt was freshened up, and the stock suspension was trashed in favor of a set of QA1 coilovers. QA1 shocks were also added up front. The chassis was boxed for strength, especially in the area above the axle that was notched for clearance. A Wilwood disc-brake conversion and custom stainless steel fuel cell round out the chassis mods at the rear of the '58.

Since no truck is complete without cleaning up the factory body lines, Mean Green was treated to some extensive body mods. Hung Luu Autobody in Azusa, California, was tapped to widen the rear fenders and side steps to bring them in line with the outer dimensions of the cab. The inside of the tailgate was shaved smooth, and the latches and chains were removed and replaced with a cleaner arrangement mounted inside the gate. A new roll pan was also added to replace the factory taillights with ZR-1 Corvette-style reflectors. A small but crucial detail that cleans up the bed considerably is the rounding of the upper corners where they meet the bedrails and tailgate.
A new wooden floor and relocated fuel filler keep the inside of the bed looking just as cool as the outside.
The front end of the truck isn't all that crazy, but it is an attention-getter. The hood was punched multiple times for louvers, and a ton of man-hours were spent aligning all of the sheetmetal so that the gaps between the parts were perfect. Once the body was perfect, a dark green base was applied then candy green flames with pearl and gold pinstriping were sprayed. The green-on-green combo looks amazing in person and really ties in nicely with the interior of DeJuan's ride.

View Photo Gallery | 8 Photos
Photo 6/8   |   1958 Chevy Apache Half Ton Truck front View
Twenty-six years worth of work went into this truck, and we'd venture to guess that much of the effort was spent refining the interior. Put simply, the inside of this truck is immaculate. The dash has been shaved, recontoured, and outfitted with VDO gauges. Bucket seats taken from a BMW 740i coupe replace the antiquated bench and offer power movement in more directions than we can count. A truly custom carpet kit was crafted with finished edges, which covers the floor from corner to corner. Custom-dyed leather covers everything that isn't nailed down, and the headliner and door panels are finely sculpted to give the green interior a rich, flowing feel. Gabe's Upholstery tackled the interior refinements, and then G&M Stereo in Ontario, California, finished the job with audio equipment from Pioneer and Xtant.
The road to satisfaction has been a long one for DeJuan. It's certainly had some ups and downs, but the payoff for his patience, time, and money was huge. When he debuted the truck at the prestigious Grand National Roadster Show, it pulled the Second Place trophy in its class. Not too shabby for a truck that cost 75 bucks.
THE 411
Owner/hometown:
DeJuan Taylor / Altadena, California