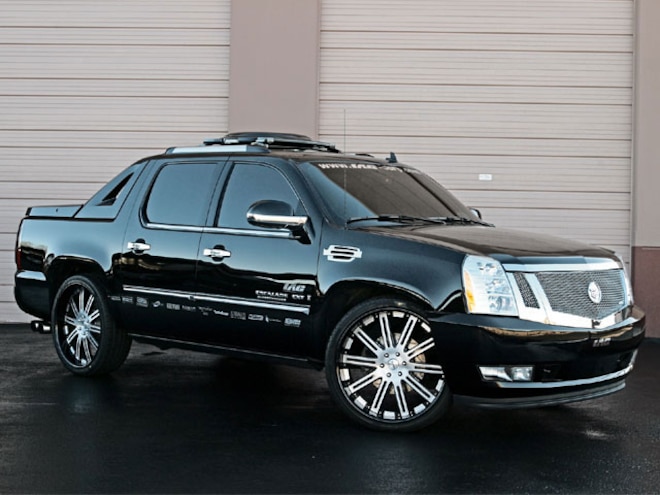 View Photo Gallery | 11 Photos
Photo 2/11   |   2007 Cadillac Escalade right View
An owner of a Cadillac Escalade knows about style, sophistication, and power. After all, it comes from the factory making 403 hp and 417 lb-ft of torque, so there aren't any mice running the engine in this fullsize SUV.
However, if the owner of an Escalade is a Truckin' magazine reader and happens to own of the premier custom vehicle shops in Arizona, then leaving that stock-powered Escalade alone won't suffice. That's exactly what Jason plotke Innovative Automotive group (IAG) in Scottsdale, Arizona, has done. He literally has turned a nice and powerful '07 Cadillac Escalade into tire-fryin', sinister SUV that makes 654 hp 672 lb-ft of torque. 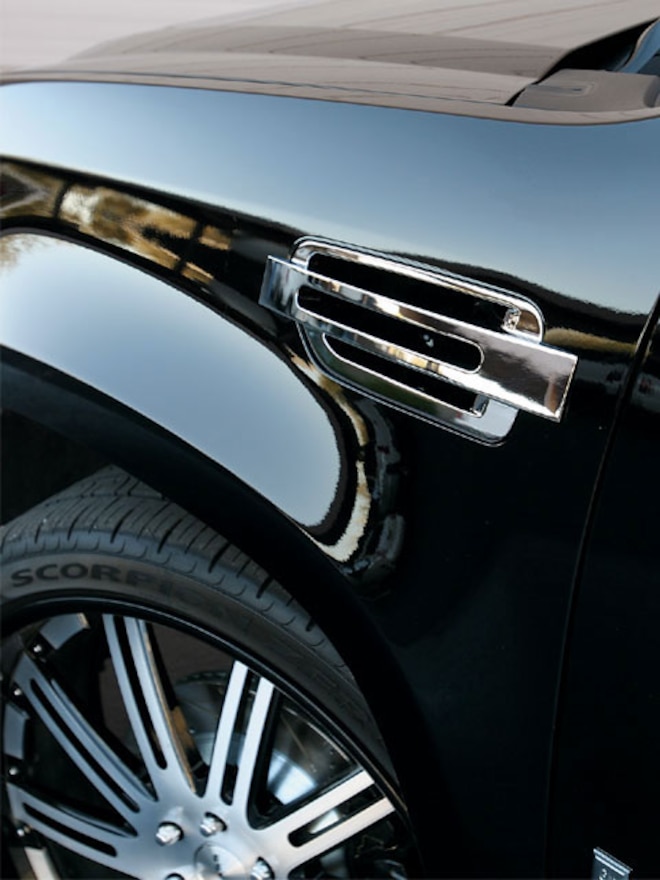 View Photo Gallery | 11 Photos
Photo 3/11   |   2007 Cadillac Escalade side Vent
So, how did he do it? When it came time the '07 SEMA Show in las Vegas, Jason and team at IAG needed to assemble an exclusive demonstration vehicle to showcase the company's offerings. IAG built this Escalade under strict parameters established by General Motors, which is an OE supplier of products. So, the goal was to build a vehicle whose luxury brand wouldn't be overly discarded, but rather paid homage to.
Starting with the engine itself, the 6.2l V-8 was completely transformed from semi-powerful to super powerful, thanks to the addition of a Procharger centrifugal supercharger that is intercooled for even more efficiency and makes 10 psi of boost. Also installed was an Airaid air intake, Dynatech 4-into-1 long tube headers, and a Corsa exhaust system. All the fine-tuning of the system was done at house of boost. Those modifications alone were enough to net an additional 251 hp over stock. It's impressive, to say the least. but that's not all. Exterior-wise, the Escalade was given a cut, buff, and color-sand, then the factory grille shell was replaced with an exclusive IAG piece, as well as the door handles and side vents.

View Photo Gallery | 11 Photos
Photo 7/11   |   2007 Cadillac Escalade rear Left View
The suspension on the Escalade has also been altered to take advantage of the newfound power under the hood. A McGaughy's 2/4 suspension drop was placed under the front and rear of the vehicle. Fitted inside the extremely large pirelli p305/25R26 rubber are equally stunning 26-inch Autocouture wheels, which were color-matched to the vehicle's black exterior. Finally, to assist in stopping the more than 650hp wonder, the IAG crew installed a set of Baer Eradispeed disc brakes.

View Photo Gallery | 11 Photos
Photo 8/11   |   2007 Cadillac Escalade rockford Fosgate Subs
Even more creature comforts are inside the vehicle. The factory audio system was enhanced quite a bit with Rockford Fosgate speakers. Jason mounted a pair of 10-inch Rockford Fosgate subwoofers built into a special enclosure that tucks under the rear flip-down bench seat, still making the fold-down back wall of the Escalade accessible. more Rockford Fosgate components were installed into the A-pillars of the truck and powering the entire system are two very large Rockford Fosgate amplifiers. Rear 8-inch headrest monitors with head sets were provided by Rosen. And as if that were not enough to impress in the audio/video department, IAG went the extra step and installed a KVH satellite system to the roof that is virtually invisible when mounted to the factory roof rack. up on the headliner, IAG replaced the factory piece with a new chocolate-covered suede piece, then updated the door panels and inner seat liners in the same chocolate finish.
The IAG 654hp wonder is a testament to what lurks under the hood from this powerful engine. So, if you are ever in the Scottsdale or phoenix area, and a slightly lowered, black Escalade pulls up alongside of you, be prepared to see the business end of it. Trust us, this thing will quite literally fry all four tires from its AWD running gear. It's amazing.