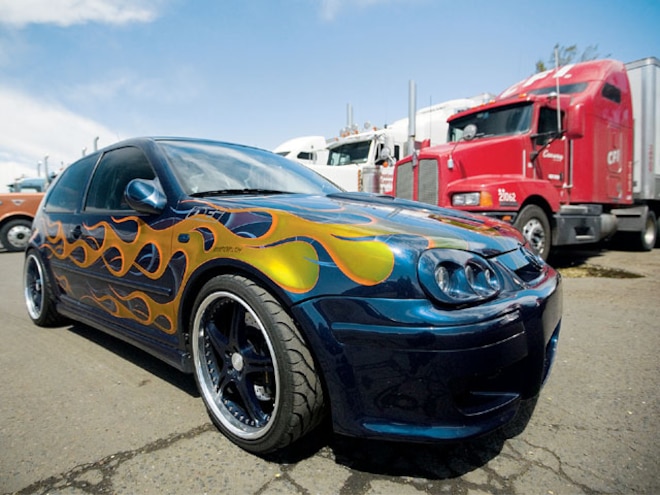 View Photo Gallery | 18 Photos
Photo 2/18   |   2001 Volkswagen Golf Tdi Tuner Car front Left
At first glance you might wonder what a compact car with 19-inch rims, custom paint, and a lowered suspension is doing in Diesel Power. Rest assured that you haven't picked up Import Tuner by mistake. Although you can't hear the clatter through the pages, the Volkswagen shown here represents pure diesel performance. Ben Swain's '01 Golf features a 1.9L TDI engine that came from the factory with 90 hp at 3,750 rpm and 155 lb-ft of torque at 1,900 rpm. You aren't going to pull your fifth-wheel trailer with that meager power, but it will move a 2,800-pound car along with ease. Ben is a shrewd businessman and has owned scores of cars over the years-and he never loses money on them. The Golf was no different; he purchased the vehicle recently for pennies on the dollar after the previous owner modified just about every aspect of the car. 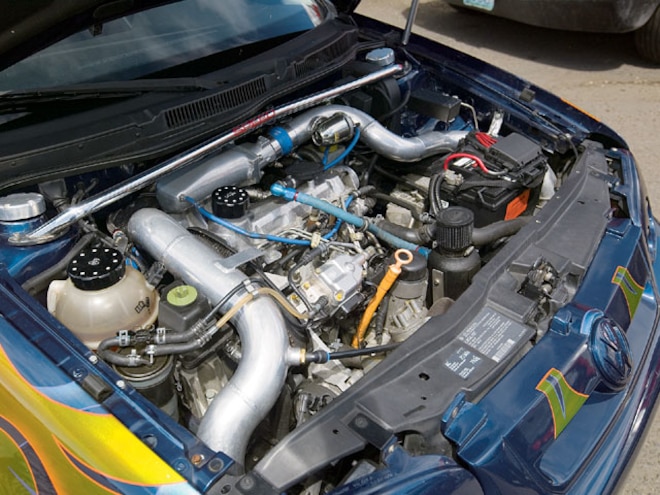 View Photo Gallery | 18 Photos
Photo 3/18   |   The tiny 1.9L TDI engine in the VW Golf features an upgraded turbo, fueling box, Spearco intercooler, and Bully Dog propane injection.
Under The HoodThe TDI engine now pumps out incredible power, thanks to high-flow injectors and a TEC-25 turbocharger that work in conjunction with a Rocket Chip ECU stacked with an IST fueling box. Further increases in power come courtesy of the G60 intake manifold and the custom stainless steel exhaust. Most tuner cars run nitrous oxide (or at least the stickers), but when Ben needs more power, the bottle he opens is filled with propane. The factory five-speed transmission and transaxle have held up to the increased power, only benefiting from a Neuspeed short shifter, ACT clutch, and synthetic lubricants.
Suspension And BrakesIt takes more than power to make a fast car; you have to be able to transfer that power to the ground. Ben's Golf uses Bilstein coilover shocks and Neuspeed sway bars that trade a marshmallow ride for canyon carving ability. The suspension is adjustable and has been dropped nearly 2 inches for a lower center of gravity. 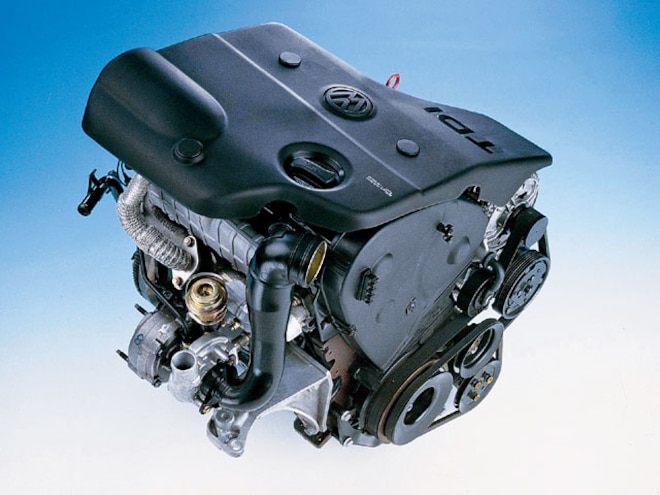 View Photo Gallery | 18 Photos
Photo 4/18   |   In stock form, the VW 1.9L TDI Golf engine made 90 hp at 3,750 rpm and 155 lb-ft of torque at 1,900 rpm. The TDI's unit injection features up to 30,000-psi injection pressure, considerably more than most common-rail systems, while still permitting pilot injection capability. These cast-iron engines also feature a variable geometry turbocharger.
With twice as much power as stock, the brakes have been upgraded so that the deceleration is on par with the acceleration from the modified diesel engine. Huge brakes from AP Racing featuring massive 131/2-inch two-piece rotors and four-piston calipers replace the merely adequate factory front discs and rear drums. The big brakes wouldn't fit inside the stock 15-inch rims, so they were tossed in favor of three-piece 19-inch SSR Interale rims wrapped in sticky 235/35R19 BFGoodrich G-Force KDW tires.
Inside And OutThe interior of the Golf is a mix of show car and race car, with nearly all of the stock components removed. Diamond-plated floorboards and a chrome rollbar surround the Sparco racing seats. The rear seat was removed from the car and replaced with a custom propane tank to feed additional fuel to the engine. Behind the propane, the custom diamond-plated floor continues below the speaker enclosure that holds two 12-inch in diameter JL Audio subwoofers. The subs are complemented by JL Audio components in the doors-two JL Audio amplifiers beneath the rear floor and a Panasonic head unit in the dash. The head unit resides below a gauge pod with Auto Meter Phantom white-faced gauges that display boost pressure, oil pressure, and voltage.
While the interior is racy, the exterior is all show. Kolorcraft, in Syracuse, New York, laid down custom hot licks over the factory blue paint. The detail of the flames is quite impressive, with orange and yellow highlights over ghost flames. An aftermarket front bumper wraps around the Spearco intercooler without blocking airflow. Hella projector headlamps and euro mirrors round out the exterior modifications, and help the TDI stand out from the crowd.
The bulk of the modifications were made by the previous owner in order to campaign the TDI in Car and Driver magazine's One Lap of America race. While it is not as powerful as some exotic sports cars, the 35-mpg fuel economy was a great advantage in this type of cross-country race. Hopefully U.S. consumers will soon learn the advantage of small diesel engines as well, and we will see them under the hood of more compact cars in the near future. While we have no plans to turn into Import Tuner, this is not likely to be the last sports car you see on the pages of Diesel Power.