The Dodge You Don't Want To Mess With 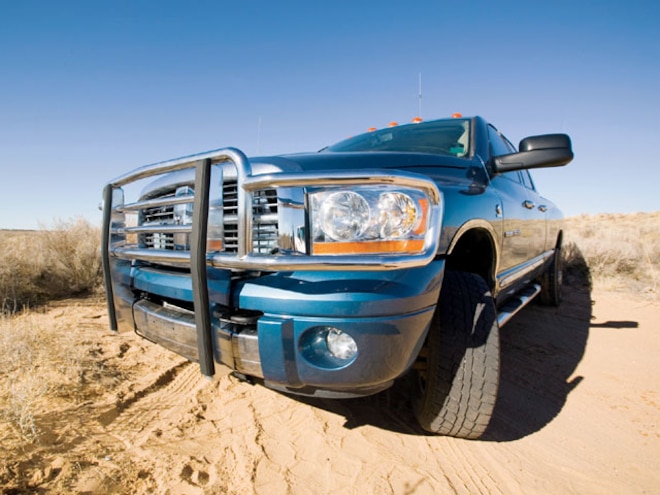 View Photo Gallery | 19 Photos
Photo 2/19   |   2006 Dodge Ram 766hp Sleeper front Grill
Dennis Adams wanted a truck to pull his horse trailer. When we met Dennis at Pro Power Dyno Services in Rio Rancho, New Mexico, his truck put down 766 hp on the Dynojet. Even with the truck firmly mounted on the rollers, the tires were smoking and trying to break loose. Pro Power's Dynojet was only calibrated to measure up to 1,500 lb-ft of torque, a number his '06 Dodge Ram 3500 easily eclipsed without much effort. Surely this truck couldn't be built just to tow a trailer.
The truth is Dennis has never had this truck at a dragstrip, and we were present during the one and only time it has ever been on a dyno. He really does just use the truck for towing and everyday work, as evidenced by the scratched paint, chipped windshield, and CB antenna on the roof. Other exterior features include a chrome brush guard, tubular side steps, and a B&W turnover ball gooseneck hitch. There are no fancy rims, custom paint jobs, or multiple chrome shocks here. The real story is not found on the exterior of this truck, but under the hood. 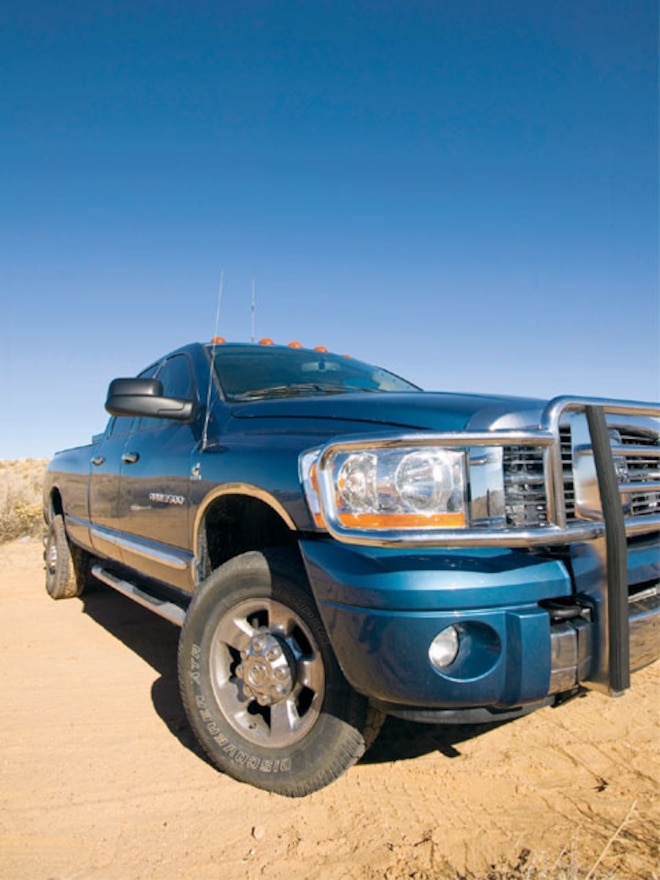 View Photo Gallery | 19 Photos
Photo 3/19   |   2006 Dodge Ram 766hp Sleeper headlamps
So It BeginsDennis owns an oil field consulting business in Farmington, New Mexico, where he met diesel fanatic and Underground Diesel owner Newly Tolf. Dennis, who previously owned a juiced 5.9L Cummins 12-valve truck, didn't require much urging from Newly before he began modifying his common-rail Dodge. The first round of upgrades included Auto Meter gauges, an MBRP exhaust, a TST Powermax CR module, and a FASS fuel system. To move more air, Dennis purchased a set of ATS twin turbos, but the Bosch common-rail injection system couldn't keep up.
Moving to the next weak link in the chain, Dennis installed a modified CP3 injection pump from Industrial Injection. Unfortunately, a washer unknowingly found its way into the engine during the install, and after three days of bouncing around, the entire engine was destroyed with only 20,000 miles on the truck. Most people probably would have been very upset at this point, but after years of hard work in the oil fields, Dennis Adams doesn't sweat the small stuff. 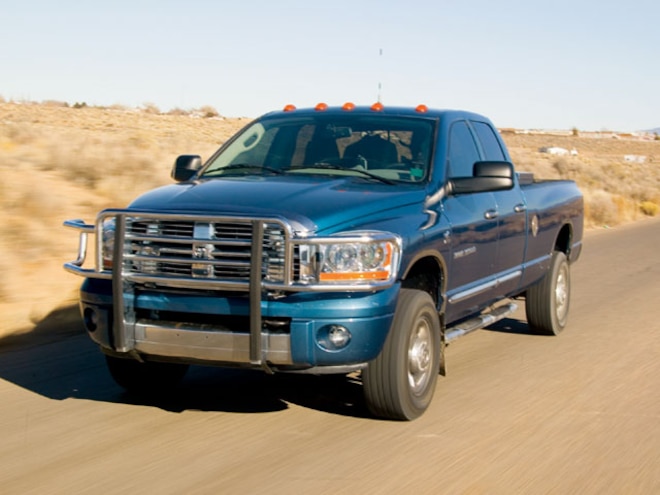 View Photo Gallery | 19 Photos
Photo 4/19   |   The huge brush guard protects the truck from stray deer and other animals found on the roads around Dennis' home in Farmington, New Mexico.
Time For A New EngineAfter the washer incident it was time to go nuts, so Dennis called ATS Diesel Performance and shipped the truck to its headquarters in Longmont, Colorado. During the month that ATS had the truck, it pulled out the engine and completely rebuilt it. The entire rotating assembly was balanced and blueprinted, and a Fluidampr harmonic damper smoothed out any remaining vibration. After the block was prepped, it was topped with an ATS Tow camshaft, fire rings, and ARP head studs. The twin turbos were upgraded from an Aurora 2000 and 5000 combination to an Aurora 3000 and 5000 duo, which he then combined with fuel from ATS dual CP3 injection pumps and 90hp injectors. The engine should last much longer than 20,000 miles, thanks to the Smarty tuning that was combined with an Edge EZ module and the custom bypass oiling system.
When Dennis flew to Denver to pick up the truck, Ranee Elder, of ATS, was there to pick him up from the airport. How is that for service? Needless to say, the drive back from Longmont to Farmington was a quick one.
The Rest Of The StoryBehind the high-horsepower engine is an ATS Five Star torque converter and a transmission full of race parts controlled by an ATS Co-Pilot. These upgrades include a billet input, intermediate and output shafts, as well as a matching flexplate. The massive power is routed through the stock NV273 transfer case to factory AAM axles capped with high-capacity ATS differential covers. Behind the factory rims and Cooper tires, Hawk Performance brake pads and cross-drilled rotors bring the truck to a stop in a hurry.
Dennis built an auxiliary fuel tank that holds 150 gallons of No. 2 diesel, and had it painted to match the truck. This provides him with plenty of fuel for his work in the oil fields, and also for the drive he makes over Wolf Creek Pass each weekend when he's pulling his 17,000-pound horse trailer from Farmington to Chama to herd cattle.
We aren't sure how exciting it is to be atop one horsepower after being strapped to 766, but Dennis tells us that he enjoys herding and finds the work relaxing. We admire Dennis Adams' restraint, and if you ever happen to be next to him at a stoplight, you should too.