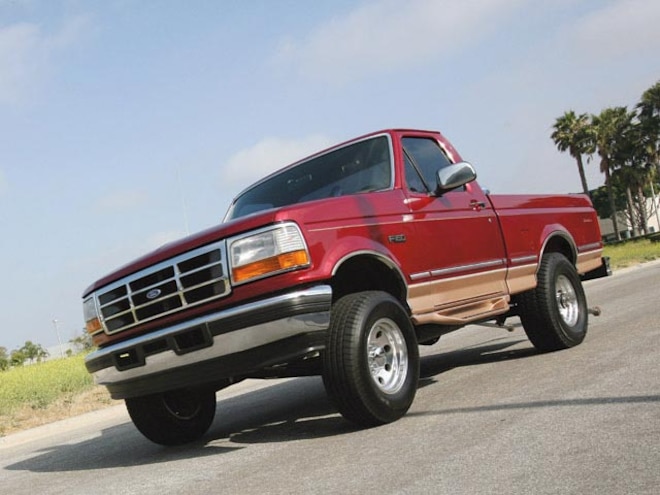 View Photo Gallery | 16 Photos
Photo 2/16   |   1995 Ford F150 Cummins Diesel left Front Angle
When life gives you lemons, make lemonade. That's what Jim Harris did when his Peterbilt 18-wheeler rolled on the Hollywood Freeway in Los Angeles. The rig was totaled, so it ended up sitting around taking up space. His son's college truck, a '95 F-150, was also no longer being used. In a flash of inspiration, it became obvious what had to be done with this clutter.
Swapping a 14.0L Cummins into a Ford should be pretty straightforward right? After all, Cummins engines came stock in production vehicles. What's the difference? Well for starters, the big rig's turbodiesel weighs 3,600 pounds. Besides that small challenge, Jim had to engineer a solution to transfer the N14's power (500 hp and 1,450 lb-ft at 1,600 rpm) to the rear wheels. These numbers are larger than stock, thanks to a modified Cummins ECM, which has had its speed governor removed and fuel curve tweaked. 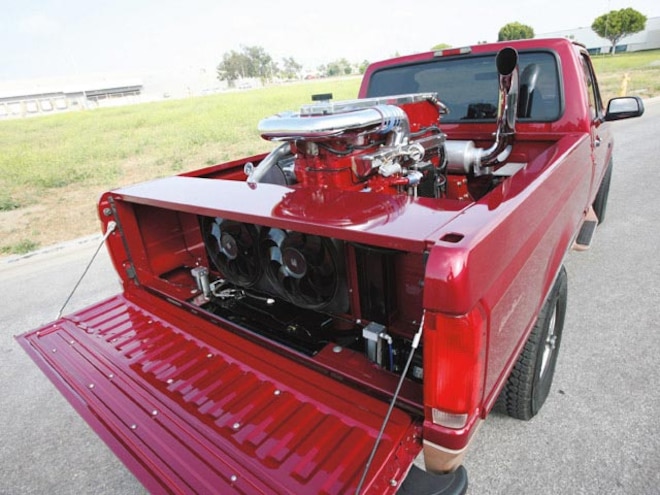 View Photo Gallery | 16 Photos
Photo 3/16   |   With the tailgate open, the four-core crossflow radiator and two electric fans become visible. The factory intercooler was ditched because the 14.0L Cummins engine never works hard enough to need it.
In order to support the weight of the N14 Cummins engine, the 1/2-ton F-150 C-channel frame was plated with 3/8-inch steel. In the rear, 1-ton leaf springs with fortified hangers support a Ford 101/4-inch rear axle that had its center section shifted to the passenger side. Two boxed crossmembers were tied into the rear spring hangers to mount the 14.0L Cummins, NV4500 five-speed manual transmission, and Casale V-drive. The front suspension was also upgraded with 1-ton parts. A custom South Bend twin-disc clutch, a lightened flywheel, a Wilwood master cylinder with a hydraulic release bearing, and an aluminum engine-to-transmission adapter plate mates this odd couple together.
Another interesting feature of this truck is what was left intact. The 300ci straight-six gas engine keeps the front tires on the road (most of the time), and powers the alternator, power steering pump, and A/C compressor. The gas tank was carefully cut and reformed to fit inside the space available. This modification let Jim retain the factory fittings. A small diesel fuel cell was also added. The Cummins N14's Jake Brake, sandwiched between the modular cylinder heads and valve covers, still roars and slams the front end to the ground with a flick of the switch. 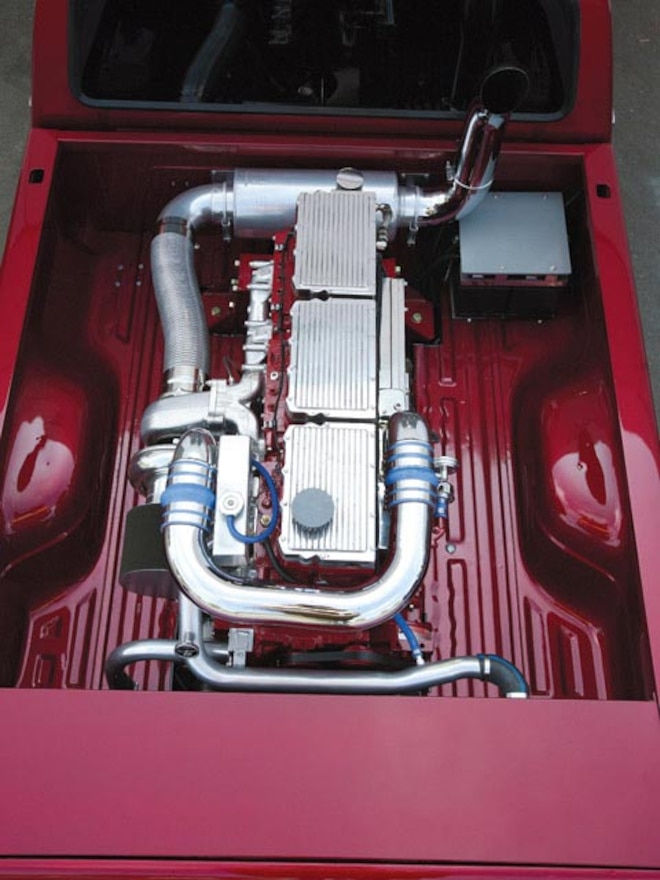 View Photo Gallery | 16 Photos
Photo 4/16   |   Jim Harris is not hauling this immaculately detailed Cummins N14 turbodiesel, it's hauling him.
The fruit of Jim's labor makes for one sweet ride. You might be wondering about the driving dynamics of this unusual engine-truck combination. The standard operating procedure is to start the front engine, then light off the real one in the rear, put it in gear, and hang on. Since the N14 Cummins has so much low-end torque and limited rpms, Jim says the lower gears in the transmission are basically useless. Typical street driving is Third, Fourth, and Fifth gears, wherein the truck really hauls in the last two. Jim did not intend for his truck to be a daily driver, dragster, or hauler. So why did he put a 14.0L Cummins in an F-150? He built it because he could. Hot rodding is in his nature. The air-activated wheelie bars (which showed signs of wear) indicate this machine is not just for show.