Twice the Valves, Twice the Fun 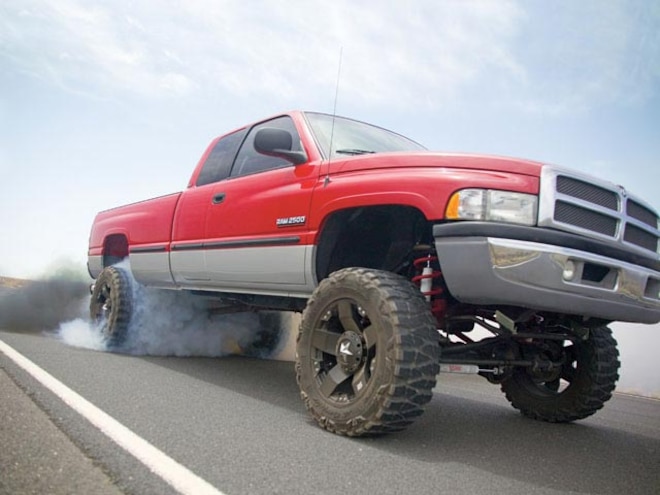 View Photo Gallery | 13 Photos
Photo 2/13   |   1999 Dodge Ram 2500 Cummins burnout
Do you remember your first diesel experience? For Jesse Gulas, it was a 6.2L Chevy that his family used to travel to rodeos around New Mexico. In addition to being slow and loud, the truck left the family stranded in Las Cruces, New Mexico, when one of the heads decided to part ways with the block. This might have been enough to scar some people for life, but the Gulas family headed straight to the Dodge dealer and bought a brand-new '90 dualie with a Cummins. The Gulas family never looked back. 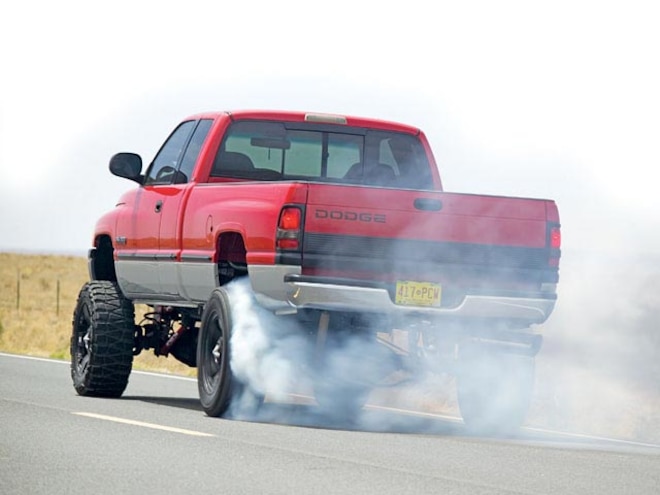 View Photo Gallery | 13 Photos
Photo 3/13   |   Nitto Mud Grapplers aren't cheap, but Jesse lit up his tires for our camera without hesitation.
Several Trucks, One Brand
Jesse has owned several different trucks since that time. They have all been Dodges though, and they have all had Cummins engines. This includes a juiced 12-valve that had a B1 turbo and custom fuel plate that put down 487 hp. Jesse eventually sold the 12-valve and bought a common-rail Cummins-powered truck with 8-inches of suspension lift and 35-inch tires on 20-inch rims. When someone made him an offer he couldn't refuse on the common-rail truck, Jesse began searching for his next project.
An Urban Legend Comes To Life
We already know that he was looking for a Dodge with a Cummins engine, but Jesse had additional criteria. He needed an extra-cab truck with four-wheel-drive, and he wanted an automatic transmission behind the diesel engine. Ideally, he hoped to find a 12-valve truck since they are the easiest to modify, but he ended up with the '99 24-valve pickup shown here.
Why the change of heart? "I wasn't looking for a 24-valve-powered truck," Jesse confesses, "but this truck was so clean that I couldn't pass it up." It's the sort of story that you hear about someone's cousin's girlfriend's little brother. Jesse purchased the truck from the original owner with 124,000 miles on it. The previous owner was an elderly gentleman who rarely drove the truck and never towed with it. In addition, the pickup was always garaged, and in nearly new condition.
No Rest For Jesse
If the truck had lived a pampered life for its first nine years, that was all about to change. Within three months, Jesse had the engine apart and added a host of aftermarket products. "I can add all the parts I want to this engine for the cost of injectors for the common-rail truck," he reports. The parts list is extensive, starting at the front of the engine with an AFE Stage II intake and ATS High Ram intake manifold. These two products allow more air into the engine-air that is delivered in large volumes by the High Tech Turbo 71 series turbocharger. The turbo has a 71mm turbine with a 64mm compressor wheel and 14mm wastegate for quick spooling characteristics and increased airflow throughout the powerband. The turbo is bolted to an ATS Pulse Flow three-piece exhaust manifold and feeds spent gases through a 5-inch MBRP mandrel-bent, stainless steel exhaust system.

View Photo Gallery | 13 Photos
Photo 4/13   |   Jesse did not waste any time modifying his new truck. Visible in the photo are the ATS intake manifold and AFE intake. Not visible are the Edge Jammer injectors and High Tech Turbo 64-71.
The ATS exhaust manifold is tapped for a pyrometer, and Jesse hooked up DiPricol gauges to monitor exhaust gas temperatures, boost pressure, and transmission temperature. Keeping track of EGT is important because he has a serious fuel system to keep up with the air provided by the High Tech Turbo. A FASS 150gph lift pump makes sure that plenty of clean, air-free fuel gets to the stock VP44 injection pump. From there, plenty of diesel is injected into the cylinders by Edge Jammer 150 injectors.
Purple Parts And Hand-Me-Downs
The combination has made 510 hp and 1,010 lb-ft of torque on a Dynocom dynamometer, so Jesse clearly knows what parts work well together. In order to stand up to all that power, he didn't mess around with shift kits or piggyback controllers for the transmission. Jesse went all out with a fully built 47RE from ATS that includes a Five Star billet torque converter, deep aluminum pan, full-race valvebody, high-volume pump, and upgraded clutch packs. The transmission feeds power through the stock transfer case and axles, which have proven to be stout components.
As if the massive torque is not enough to tax the axles, they are capped with 20-inch KMC Rockstar rims wrapped in 35-inch Nitto Mud Grappler tires. Jesse took the rolling stock off of his last second-generation Dodge. In order to make room for the big meats, he also retrofitted the suspension from a previous truck that he owned. The 5-inch Skyjacker suspension makes plenty of room for the 35-inch tires, and the red suspension components even match the truck. The Skyjacker system uses simple lift blocks in the rear with longer shocks. The front uses longer coils, longer shocks, new heavy-duty control arms with relocated suspension geometry, and a drop pitman arm and matching track bar relocation bracket. The matched components allow the truck to ride high while retaining the factory ride characteristics, with no vague steering or bumpsteer. Although he has only owned this '99 for a few short months, Jesse is not regretting his purchase. "I think that I am going to hold on to this one for a while," he told us. If he ever does decide to replace this truck, we don't know if it will be with a 6.7L, a 12-valve, a first-generation, or a Mega Cab, but we do know that it will be made by Dodge and powered by Cummins.