The Story of a 1,200-Horsepower Duramax 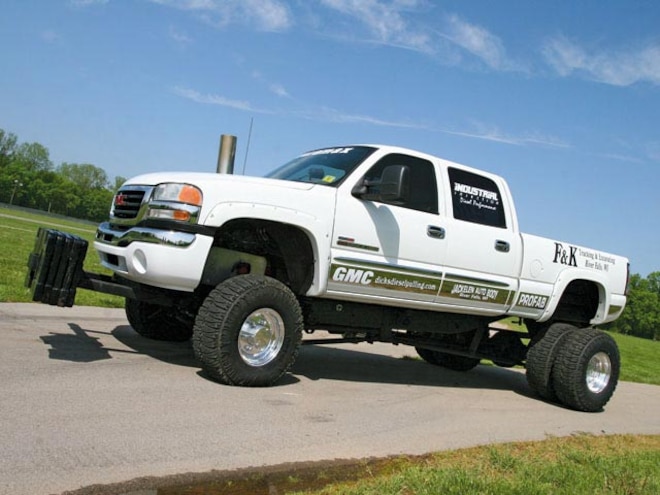 View Photo Gallery | 15 Photos
Photo 2/15   |   2002 Gmc Sierra 2500hd Duramax left Side
If it ain't broke, don't fix it. That was the initial thought process fueling father and son duo Chris and Wes Kusilek's amateur sled pulling dream two years ago. But when rearend and transmission problems surfaced on their stock Duramax, the idea of building an all-out, bulletproof sled puller became their new dream.As quickly as the idea came to them, they soon found themselves knee-deep in a wild project that has since placed them in some of the most competitive pulling classes at sanctioned events throughout the Midwest. 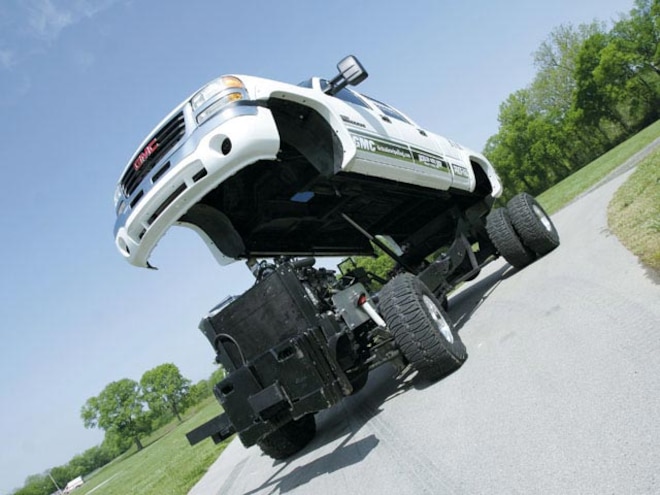 View Photo Gallery | 15 Photos
Photo 3/15   |   While the truck's lift-body setup is a definite eye-catcher, it was designed specifically for having easy access to the potent Duramax engine. A hydraulic pump is responsible for lifting the body when engine maintenance and repairs need to be made.
The buildup of the truck you see here began last winter and is based off an '02 gas-powered 3/4-ton. Their busy off-season project was finally ready to go in March. As the truck sits today, the Duramax is far from stock. Eagle rods, a SoCal cam, Mahle pistons, and custom heads from MAS Performance reinforce the internals, while a Garret GT42 turbo with a custom pedestal introduces massive volumes of air into the engine and a unique stainless steel "ice box" acts as an air-to-water intercooler. To top it off, a Grand Poobah CP3 injection pump from Industrial Injection coupled with the factory CP3 fuels the beast. On the electronic end of things, EFILive tuning helps the truck make what the Kusileks estimate is 1,200 horsepower and 1,800 lb-ft on fuel only.
The lift body idea was based solely on serviceability. Wes and his dad knew how packed the engine compartment was and how difficult in-frame repairs and modifications would be, so the lift body made the most sense. A hydraulic pump and electronic controller raise and lower the factory body (no fiberglass body here) and it can be bolted down, rendering it an atypical tilt body.
The transmission and chassis are reinforced to handle the big power this Duramax makes as well. The transmission is far from the factory Allison. The one-speed Pro Fab Reverser utilizes a centrifugal clutch, giving the truck a 3,100 rpm stall at the line. A Probell bellhousing mates to the back of the engine and a Pro Fab drop box is responsible for transferring the big power to the wheels. The front axle is a custom torsion-bar roller-setup with a solid 106 Rockwell where the rollers move with the truck in the event of excessive bouncing while blasting down the track. The rear is a stout 2 1/2-ton Rockwell with 6.20 gears. The stock frame was retained, but there are two custom tubular traction bars (upper and lower) on each side of the truck that meet in the middle of the frame with the rear traction bars. Wes and Chris also had Pro Fab build rear wheel spacers for the dualie setup.
In addition, Pro Fab fabricated custom wheels for the truck and welded on the custom locking hubs. The rear wheels are wrapped with 35-inch TrXus STS all-terrains from Interco for optimum traction in the dirt.
While still new to the sport, Wes has come a long way in the world of sled pulling, and driving this wild Duramax has become an addiction. In recent years, enthusiasts have proven that the Duramax can go head-to-head with any of the modified Cummins engines, and the Kusilek's truck is a perfect example. Wes, his father, and friends, have all contributed to the buildup, further reinforcing the family-oriented nature of the sled pulling sport.