Custom Isn't Taught In A Classroom 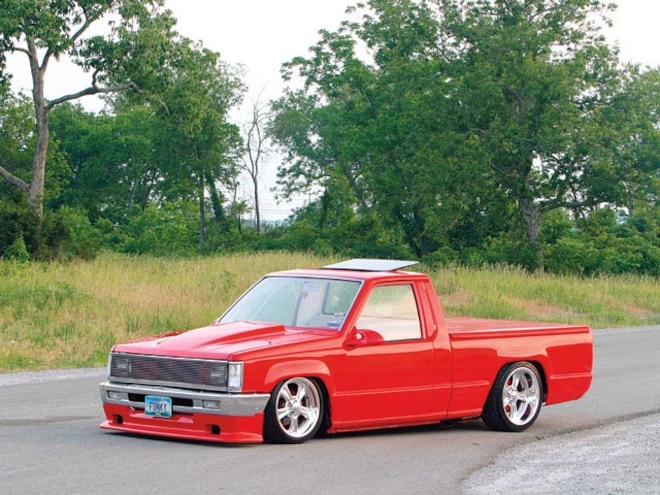 View Photo Gallery | 8 Photos
Photo 2/8   |   1987 Dodge D50 left Front Angle
There is no denying the fact that fully customized minitrucks pull loads of positive attention. With today's truck market being completely void of true production minis, it is certainly refreshing to see yet another classic model ready for the streets and the show circuit. Nobody understands this sentiment better than Gary "Lumis" Lewis from Greensburg, Kentucky, because he was down to drop his kid's college fund into building his '87 Dodge D50.
Now, before you pass judgment on Gary's decision, two things must be taken into consideration. First off, community college is far less expensive than a four-year university, so that means junior should be able to easily kick-start an educational career with a part-time gig at the local burger joint. Secondly, the truck turned out awesome-isn't that justification enough? Most die-hard truck junkies should be in complete agreement with Gary and the actions he took in order to create one more minitruck to fill our pages. Now that Gary's deep, dark secret of choosing truck over child has surfaced and been publicly discussed, a bit of mercy should be afforded to him. After all, we're all here to obsess over trucks ,and Gary has provided us with a hot little dish for us to salivate over. But, don't for a second think that Gary is getting off the hook just yet.
With a few custom builds already under his belt, Gary didn't even flinch while chopping the D50's stock stance. As with most minitruck builds, the suspension height measures about even with that of a crushed soda can-perfect for starting a serious collection of road reflectors. Along with Gary's efforts, Old Mac Rod Shop, in Campbellsville, Kentucky, was called upon for help while tackling the task of bringing the Dodge closer to the ground. Belltech 2-inch drop spindles helped to lower the altitude up front, while 'bags at each corner provide adequate ride height and body-dumping ability. Filling in the gap between the road and the truck's fender lip is a set of Billet Specialties Chicayne wheels and Dunlop shoes. A 17-inch and 205/40 roller/rubber combo flashes up the front end, while 18x10-inch billets and 265/35 tires follow in hot pursuit. Gary cleaned up everything in close proximity to his truck's jewelry, as upgraded aluminum brake lines shine amongst the body-color-matched brake components. Speaking of the bright and shiny PPG Viper Red dyed body, let's take a look at just how far a few semesters of loot can go when it's spent on automotive cosmetics.
Greg didn't have to worry about searching high and low for a competent body shop, instead he recruited his buddy, Jeff Rayburn, from Lumanize Custom and Detail out of Greensburg to lend a helping hand. Together, the two managed to knock out some downright impressive results. The cowl was cut out from a fullsize Dodge and welded to the factory D50 hood with a fine, precision fit. A close shave is always a major hygienic ritual in the world of customs, and it was no different with this Dodge. Next, the truck's taillights, door, tailgate handles, and gas door were cleaned up and filled for a tidy appearance. The gas filler was relocated into the bed, which was covered with a Gaylord fiberglass tonneau cover. Also hiding under the bed lid is a color-matched floor with stainless steel strips and matching white leather-licked detailing. Greg opted to install Euro headlights behind a phantom grille and used clear turn signals for an uncluttered frontal faade. Although the D50's striking exterior catches lots of head turns and double takes, the truck's cockpit is definitely the sight to see.
Fiberglass runs the show inside of the cab. The dash and center console have been smoothed out and given the same treatment of PPG Viper Red as the outer metal. The chopped Grand Am bucket seats, floor mats, and door panels have been wrapped in white leather and feature a few licks for additional flair. KLC Upholstery from Campbellsville can be held totally responsible for the stitchwork, as well as the tan carpeting. The cab also features a nice little sound system, which was made up of an Alpine DVD/CD receiver, two 12-inch subs blown through from the bed, and highs and mids located in the dash. Rockford Fosgate amps deliver an ample supply of juice flowing into the speakers. So far, by our calculations, these mods account for about two year's worth of textbooks, on top of the tuition bill. Junior could have been learning from some of the most respected professors in the country, but the possibility of inheriting this ultra-clean four-bangin' 2.0L motor is worth the engine's weight in solid gold. Chrome valve covers, Pace Setter headers, and a hot-rod breather add a perfect touch of flash to the custom-painted bay. A 2-inch Flowmaster exhaust system has been added to keep the airflow moving. Add a five-speed tranny into the mix, and Gary is certainly left with enough pick-up and go for some interesting curb swerving.
The attempt to accurately calculate the truck-to-school cost ratio has been totally abandoned; however, a forecast from the totaled figures thus far can be made. If Gary had invested the amount he spent on the D50 into a low-risk money-market account with a 3.5-percent interest rate, multiplied by three years, carry the 1 ... well, since most of us here aren't math majors, let's just guesstimate and say Gary's kid could have been pretty smart. Maybe daddy will at least let junior take the truck out for a cruise every now and then.