John Garner Knows How To Build A Serious Eight-Lug Truck! 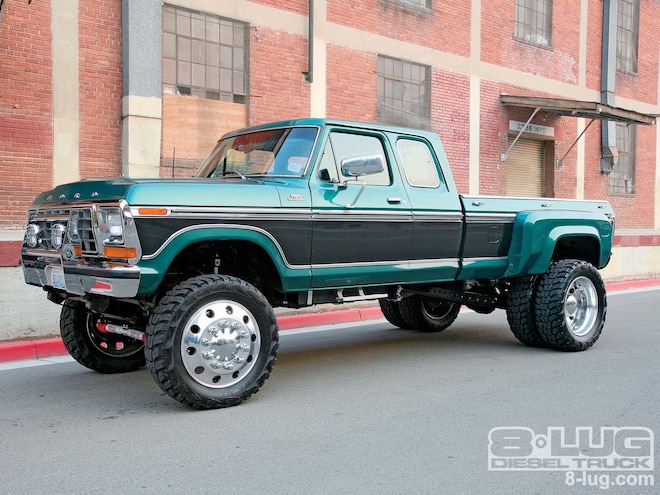 We first heard from John Garner shortly after launching 8-Lug Diesel Truck. He was excited about the new magazine and really liked the title. He, in fact, owned the domain names 8lug.com and eightlug.com. He was even willing to give us the domain names if we were interested.
View Photo Gallery | 21 Photos
Photo 2/21   |   John Garner swapped an ’03 Cummins 5.9L engine into his ’78 Ford dualie and documented the deed on his website, 8lug.com.
We were more interested in what was on his website. John took on the interesting task of dropping an ’03 Cummins 5.9L engine into his ’78 Ford dually pickup and he documented a good portion of it on the site.
We told him that once the truck was ready to drive, we were ready to shoot a feature on it to show the loyal 8-Lug readers what he had accomplished. As luck would have it, the truck was done in time for John and his son to drive down from Washington State to the Fresno Havoc show in California. We got together for the shoot and now you can enjoy the fruits of John’s labors.
The Cummins engine had 30,000 miles on it when John got it, so it’s just about broken in correctly. John used a PDR cam, PDR heavy-duty valve springs, and ARP head studs when building it. An ATS twin-turbo setup (Aurora 3000 and 5000) provides plenty of boost while the CFM+ intake supplies the incoming air. A custom 5-inch exhaust expels all the gases efficiently. The common-rail engine is thought to put out around 600 hp at the rear wheels (and nearing 1,500 lb-ft of torque).
View Photo Gallery | 21 Photos
Photo 3/21   |   0812 8l 01 1978 Ford Dually Front Grill
There’s a lot of really nice parts on this engine, including Powermax CR, ATS Stage 6 4R100, and a FASS 150/150 pump (dual). The truck has an NP205 transfer case, Dana 80 rearend, Dana 60 frontend, 4.30 gears, an ARB locker, a Hydroboost brake system, and more. There’s just a ton of fabrication work on this pickup.
The interior is modernized with a Pioneer AVIC-N4, Bluetooth audio, iPod interface, and XM radio. Seats from a Ford Lightning pickup make the long drives nicer.
The engine swap required a body lift of 3 inches, but then John also added 5 more inches of suspension lift through springs and blocks. The truck rides on an air-suspension system that uses a modified Kelderman rear kit and a “Kelderman-type” (as John calls it) helper kit in the front.
As with most custom trucks, John’s ’78 might never actually be “done.” He has lots of things he wants to do to it still, but we’re sure he’ll keep us all updated on his 8lug.com website.