2002 Chevy Silverado - The Best Of Both Worlds 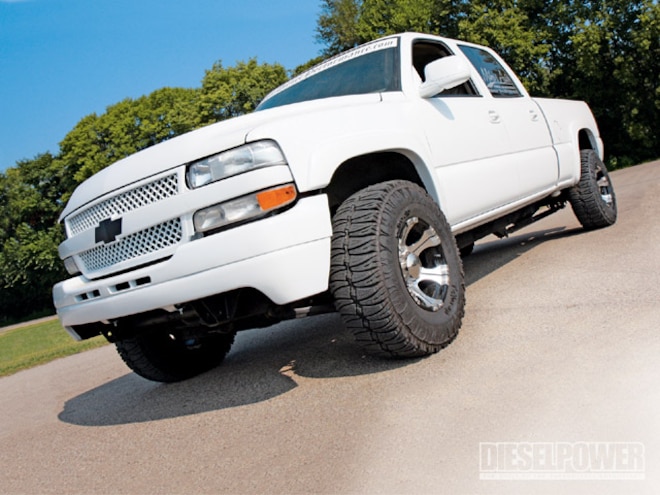 View Photo Gallery | 16 Photos
Photo 2/16   |   2002 Chevy Silverado left Front Angle
It's in the nature of the diesel enthusiast world for truck owners to try their hand in everything these days. Chad Remakel of Empire Diesel Performance epitomizes today's model diesel exhibitionist. He knows all too well that anyone who buys a diesel pickup, and is willing to put a little work into it, can have a 300-foot sled puller or a 12-second screamer in no time. And he will do anything to be competitive in the sports that have spawned out of the new-age diesel culture.
His truck began its life as a mild-mannered sled-pulling rig with only a chip, intake, and exhaust, but Chad soon turned this Duramax into a real fire-breather. His '02 Silverado is the perfect example of a high-horsepower diesel that pulls competitively and puts down some serious E.T.'s at the dragstrip. While he originally intended to compete solely in sled pulls, he's never thought twice about the possibility of trying to make one truck do both.
The first thing we noticed about Chad's Duramax was the location of the turbo under the hood. Normally mounted in the rear of the engine valley, his Duramax features a custom-built unit with a 2.92-inch diameter inducer mounted on the passenger side of the truck, which forced the truck into the 3.0-inch inducer class at Scheid's Diesel Extravaganza. According to Chad, the reasoning behind mounting the charger in this location serves two purposes: easier accessibility for swapping out turbo housings, and the possibility of running a twin setup in the future. He said the turbo pushes between 52-55 pounds of boost while drag racing, but is designed to handle 60-65 psi. Chad fabricated the turbo pedestal, all the plumbing, and the crossover tubes to make it work.
The engine internals consist of ported heads that Chad did himself, connecting rods from TTS, cut pistons, valves, valvesprings, and a custom cam from SoCal Diesel. In addition, billet main bearing caps from SoCal Diesel help keep the rotating assembly stable and PDR Diesel Performance supplied the high-flow oil pump.

View Photo Gallery | 16 Photos
Photo 6/16   |   The high-horsepower Duramax is fed by Dual Fueler CP3's from PPE, which were modified by Industrial Injection. In addition, a set of Dynomite Diesel Performance injectors flow 100 percent more fuel than stock units.
Fuel is delivered through a set of Dynomite Diesel Performance injectors designed to flow 100 percent more than stock. Dual Fueler CP3 injection pumps from PPE and a FASS fuel system provide consistent fuel to the injectors. PPE tuning, modified by Chad using EFILive, dialed the truck in electronically. The fact that EGTs reach 1,700 degrees on occasion confirm our belief that his Duramax is generating some serious power.
The factory Allison transmission was built by Sun Coast, and features a billet rear tail housing. Up front, a Sun Coast 1055 triple-disc converter transfers power from the engine and gives the turbo a chance to spool and light effectively. To play it safe, Chad decided to use a transmission blanket, which is required on all competition trucks that exceed 4,500 rpm. The factory suspension and shocks were retained, but traction bars and blocks were added to limit breakage.

View Photo Gallery | 16 Photos
Photo 13/16   |   Despite performing well in its first eighth-mile runs, Empire's double-duty Duramax was eventually knocked out by the strong-running Super Duty from Swamp's Diesel.
All that being said, you would never guess what kind of shape Chad's truck was in less than three days before we ran into him at Scheid's Diesel Extravaganza. Any ideas? Try just a cab, frame, and four tires. That's right, the motor was dropped in the night before the event and, to make matters worse, the water pump failed as they were loading it on the trailer. That next morning, he slapped on a new water pump and hauled the un-tested Duramax five hours south to compete in the Super Bowl of sled pulling, where he finished a respectable 13th out of 21 trucks in the 3.0 class.
Not a lot of pulling trucks were around for the Outlaw races at Scheid's that Sunday, and the ones that were, weren't on the drag strip running 7.80s in the eighth-mile. What's more is that this was the truck's first trip down a drag strip too. The stock 3.73 axle gearing works well in both sled pulling and drag racing. So far, the gearing is low enough to get a sled moving, but high enough to let the truck stay strong up top while blasting down the strip. And, with a trap speed of 93.8 mph in the eighth-mile, Chad thinks the truck could break into the 11s in the quarter with good traction. With an empty weight of 6,700 pounds, we'd say it's definitely possible.
We like the run-what-you-brung attitude Chad displayed at Scheid's Diesel Extravaganza. It's the kind of attitude that starts a following. His willingness to see what his truck can do in any type of event is not only exciting to watch, but shows just how versatile a fire-breathing diesel truck can be. Look for this truck to be a competitive sled puller in the Iowa, Illinois, and Wisconsin areas. But if you can't seem to find Chad hooking to a sled, rest assured, you can probably find him at the nearest dragstrip.