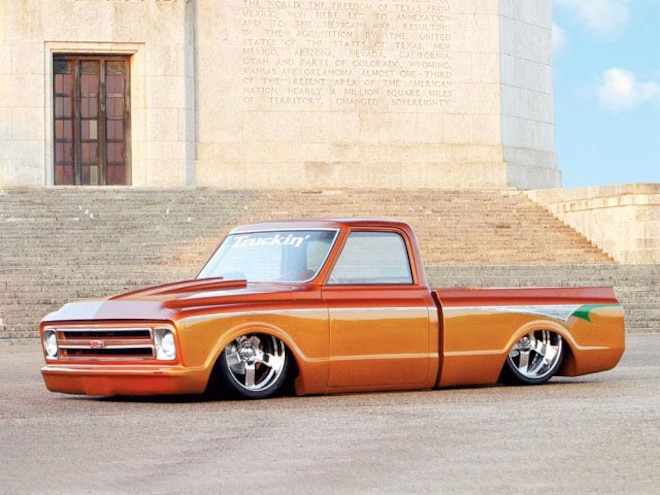 View Photo Gallery | 18 Photos
Photo 2/18   |   1971 Chevy C10 Pickup left Side Angle
Covers are elusive. Much like the "perfect 10" woman, who loves you for your flaws, doesn't mind your stinky shoes, and is a gourmet chef in the kitchen; cover trucks can sometimes be mythical. Whereas, women are one of our greatest gifts, cover trucks can sometimes be our biggest pains. Money, time, frustration, and just getting the darn thing done are the usual suspects involved. Ricky Holly of Houston found his perfect 10 in his wife Sherrie, and when it came time to build his next cover truck, a classic Chevy would fulfill his love of building custom rides. Tracking down a pretty decent '71 C10, Ricky began the search for shops in the area that could bring his newest purchase from bucket to beauty. Talking with Ray at Mind to Metal in Houston, a full build was in order and the sparks immediately began to fly. Starting with 2x4-inch 1/4-inch steel, Ray bent up framerails to make the body rest firmly on the ground. Up front, Western 2-inch drop spindles were bolted onto the custom tubular upper and lower A-arms with horizontal hot-rod styled shocks. After everything was fabricated, each piece was meticulously chromed or painted. Mounted to the spindles are 14-inch SSBC big brakes, front and rear. A Flaming River rack and pinion controls the steering, while Slam Specialties airbags with GC450 valves and Viair compressors provide the air control. The wheels of choice for the front of the C10 were Bonspeed Intense 22x8-1/2-inch billet hoops with Toyo 265/35R22 high-performance tires keeping them protected.
Out back, Ray at Mind to Metal went crazy with the welder and created a custom four-link cantilever airbag setup. Slam Specialties 'bags were once again used in the rear, along with identical GC 450 1/2-inch valves. A 15-gallon fuel cell was welded together and wedged in between the framerails. Chrome air tanks add good looks to the painted and chromed suspension pieces. Rear wheels are matching Bonspeed Intense, only this time sized 24x10 inches, with larger 295/30R24 Toyo tires. The look and function of the rear suspension is down right awesome. Of course, going up and down is only part of the fun with this truck. Going fast is also easy to do.

View Photo Gallery | 18 Photos
Photo 9/18   |   An LS1 was dressed up to the nines under the tilt hood.
Under the hood lies an '02 LS1 with a chromed Professional Products intake and throttle-body. Other goodies equipped onto the small-block are Mind-to-Metal-modified Hedman Hedders and a trick dual-inlet K&N air filter intake. A Flex-a-lite electric fan keeps the Flex-a-lite aluminum radiator nice and cool during the Houston heat. The polished 3-inch exhaust flows into MagnaFlow mufflers. Moser axles were installed into the 8-inch-narrower 12-bolt, and most of the engine mods can be accredited to Jessie's Auto Repair. Two Optima batteries supply the juice, one behind the seat and one under the hood. Heath Moore from Kingpin Kustomz in Dickinson, Texas, created the one-off engine cover that was appropriately painted to match.
Body modifications were extensive on Ricky's C10 and included the loss of door handles, driprails, marker lights, mirrors, and the gas filler. Additions consisted of a Grant Kustoms one-piece tailgate/roll pan skin, HiTech LED brakelight in the tailgate, suicide door hinges, and a tilt hood. The front bumper was sectioned and welded to the fenders, creating a one-piece front end. Alamo Customs in Alvin, Texas, handled all of the bodywork. Making the truck stand out amongst a crowd of C10s is the trick tilt bed, exposing the killer suspension work. A 1-1/2-inch body drop by Mind to Metal brought the Chevy even closer to the ground. Keeping the truck looking good are single panes of glass from One Piece Products. Once Robert Mesa, from Alamo Customs was happy with every panel being straight, he applied the PPG Corvette orange and tambourine flame body colors. Patrick Reed then stepped in and sprayed the chrome and brushed aluminum separating line and the green graphics onto the bed. The truck now looked incredible, but every cover truck must have a great interior, and Kingpin Kustomz was up to the task.
Heath Moore at Kingpin created a smoothed dash out of fiberglass, housing the Dakota Digital display. Kingpin is also responsible for the center console with billet switches, center console with 10-inch JBL subwoofer, and door panels featuring 6-inch JBL components in trick speaker pods. Two JBL amps power the system, while Dynomat from front to back keeps the sound inside the cab. The Alpine head unit was mounted in the headliner that received matching stainless stringers. A Klassix Inc. billet steering wheel caps the painted tilt column and the custom seats were covered in camel leather by Robbie's Upholstery in Alvin, Texas.
It took 2 years to make Ricky's newest dream a reality and the wait was worth it. Winning Best Truck at this year's Heat Wave show, everyone who saw the truck admired the classy look and engineering behind the build. Now, Ricky has a pair of perfect 10s at his house.