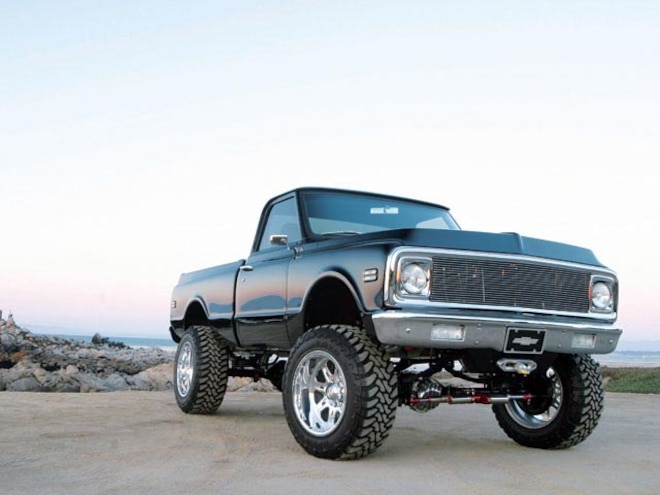 View Photo Gallery | 11 Photos
Photo 2/11   |   1972 Chevy K10 right Front Angle
It was more than a year ago when we first saw photos of Paul Owen's '72 K10. Bill Beecher and Joe Natale Jr. sent us an e-mail and a few photos asking us if we were interested in shooting the truck when it was done. True to their word, the truck was soon finished and we made the trip to Monterey, California, to see it in person.
The photos didn't prepare us for what was waiting inside the shop at Natale's Auto Service. A true frame-off build, every nut and bolt is pristine, every fuel and transmission line was plumbed to perfection, and the gloss black paint was buffed to a mirror-like shine. No corners were cut on this build.
The truck that they started with hardly bares any resemblance to the truck you see here, even though it was relatively straight and had little rust. Most of the build was handled by Bill Beecher at Natale's Auto Service, while the bodywork was completed at All Around Auto Body in neighboring Seaside, California. While the body was being massaged back into shape and the rusty floorboards were fixed, Bill got to work on the frame.
The stock frame was stripped and powdercoated silver before Skyjacker 6-inch-lift Softride leaf springs were added. The truck may be tall, but it was built to also handle the highway, so Bill fabricated mounts on the 14-bolt rear for an antisway bar. A Dana 60 front differential was chosen to match the heavy-duty rear and-just like the rear-it was powdercoated, fitted with disc brakes, 4.10 gears, and a finned aluminum cover. The front differential also has the benefit of Tom Woods CV shafts to ensure a long life. Stainless steel hard line and braided stainless hoses were used to plumb the 3/4 ton brakes to a Hydroboost master cylinder. There's plenty of stopping power here, which is a good thing, because the 35-inch Toyo Open Country M/Ts and 20x12 Weld Racing Cheyenne 8 wheels would have taxed a stock 1/2 ton brakes. Another modern addition to the old suspension, that really improved its performance, was a full set of Sway-A-Way Racerunner remote reservoir shocks. One shock was used at each corner of the truck and a pair was used as dampers on the crossover steering.
Once the truck's suspension was sorted out, Bill worked to get the truck moving under its own power. A 350ci Edelbrock crate engine was selected for its compact size and big output. With its E-Tec heads, stainless steel Hedman headers, and Edelbrock dual pattern camshaft, which has .539 inches of lift on the intake and .548 inches of lift on the exhaust; the engine puts out 435 hp. With the solenoid of the Edelbrock plate nitrous system wired to kick in at wide-open-throttle, an extra 100 hp is on tap. All of the power is handled by a Bowtie Overdrives Stage-3 700-R4 transmission and an NP205 transfer case. The transfer case is also where you'll find the stand-alone disc parking brake.
All Around Auto Body delivered the sheetmetal, after countless hours of buffing, and we think the effort shows. Black paint doesn't leave room for error, and the panels were perfect. It was then in the hands of Joe Alconaba and the crew at Monterey Auto Stereo & Upholstery to begin on the interior. Step one was covering the cab floor, firewall, rear wall, and roof with Dynamat. From there, they fabricated a full-length center console and door panels out of MDF. The rear of the console holds a Boston subwoofer, while the midrange and tweeters mounted in the doors are all McIntosh. McIntosh was also sourced for the head unit that was mounted inside the dash, and the amps mounted underneath the seats. A second Pioneer head unit, an AVIC-Z1, was mounted below the dash and in the center console, and it is used for navigation and to play DVDs. Their final tasks were to reskin the Pontiac GTO bucket seats in black leather and lay down Mercedes-Benz black wool carpet. Back at Natale's, Classic Auto Air A/C controls and a No Limit instrument panel filled with Auto Meter gauges were mounted into the dash. The last piece was a Flaming River waterfall steering wheel.
We were completely blown away by this truck. The crew at Natale's, along with All Around Auto Body and Monterey Auto Stereo, put all they could into building the best K10 possible. Since the build was documented, you'll be able to see more photos later in this magazine. Go to page 133, to see more of the details that make this truck so special.