A Billet-Blocked Cummins Built From The Ground Up 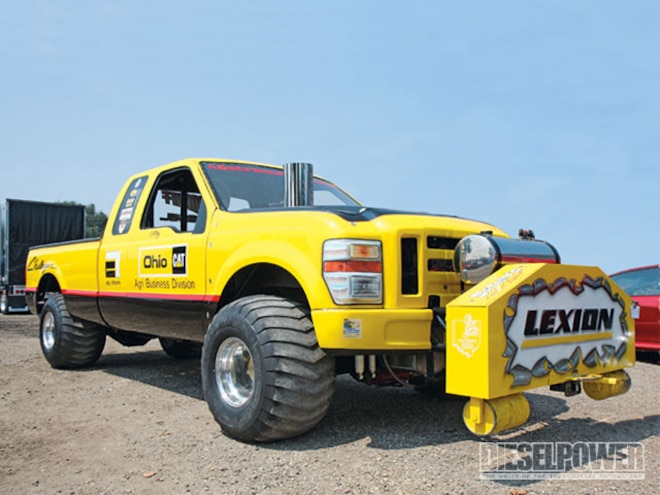 View Photo Gallery | 14 Photos
Photo 2/14   |   2008 Ford Super Duty Cummins right Front Angle
Sled pulling has been known to get people hooked for life, so to speak. Once it's in your blood, it's an addiction that never ends. Cory Atley's wild ride to the top of the National Tractor Pullers Association began just four years ago with a head gasket failure on his daily-driven 6.0L Ford. After dropping the truck off at Josh Woodruff's shop, it was soon transformed into a sled puller Cory used to compete in the 3.0-inch-diameter inducer classes. In June of 2007, he purchased Dave Radzierez' Pro-Mod truck How Do You Like Me Now? to get his feet wet in the highest level of competitive pulling classes. However, it was only a temporary fix, as this mammoth of a truck, built from the ground up, soon came to fruition.
When the project began, Cory and his father, Carl, an experienced Pro Stock tractor puller of 13 years, decided that a cast-iron block would never hold up to the kind of cylinder pressures they planned to run with their Cummins. Cory told us that "even though we're getting better parts and technology, the cast-iron blocks can't handle it." So, the decision was made to go with a solid steel billet block.
Supplied by Woodruff Diesel, the billet block began as an 1,800-pound rectangle of steel and, after a lot of machining, the finished weight was 540 pounds. The block itself is dry-sleeved with a one-piece bedplate and four-bolt main bearing caps. The bedplate ties the block into the mains, pan rails, and engine mounts. Woodruff Diesel also supplied a counter-weighted OEM steel crank that spins six 4340 billet connecting rods, and six forged pistons from Ross with Total Seal rings. The camshaft is a custom billet roller with roller lifters, heavy-duty pushrods, and roller tip rocker arms. A 24-valve cylinder head with double valvesprings and a serious porting job accompany the custom stainless steel intake plenum and exhaust manifold.
While typical Pro-Modified rules have been known to only accept factory blocks or close replicas, an NTPA ruling declared Cory's truck would be legal in its four-wheel-drive diesel class.
Two custom-built, non-wastegated HX82 turbos from Columbus Diesel Supply allow the truck to make some very serious horsepower. Cory stated that the compound setup makes an insane 170 pounds of boost. With that much pressure, a serious water injection system was needed to keep things cool. The system is made up of a Vickers pump with a Simpson valve to regulate the water injection timing, which feeds through a total of 12 nozzles. Thanks to the water injection, exhaust gas temperatures stay close to 1,300 degrees during a pull. All of this adds up to an engine that Cory says turns 6,000 rpm and makes more than 1,900 horsepower. He then modestly added, "it makes some power, we broke three billet connecting rods this year."
A Waterman fuel supply pump feeds a six-cylinder Sigma fuel injection pump from Columbus Diesel Supply. And, as Sigmas can handle up to 1,600 cc of fuel, the current setup may still have plenty of room for adjustment. Columbus Diesel also built the massive John Deere injectors Cory is running. A custom-built, four-stage dry sump oil system keeps the engine oil separate from the turbo's oiling system in case of an operating failure. A custom aluminum oil pan from Woodruff holds more than seven gallons of oil, and keeps oil away from the crank. A trick sight glass on the pan allows Cory to check the oil after each pull for possible head problems.
The story doesn't end there. A full fiberglass '08 Super Duty body from GTS sits on a complete Steve Barker tube-chassis frame. Both the front and rearend were built by Barker as well. The front axle utilizes an SCS axle and spool, while the rearend was constructed from 0.172-inch sheet metal, and houses an SCS axle and spool as well. A Hayes four-disc clutch with a Lakewood adapter transfers power to the one-speed SCS Zero Drag Reverser transmission and drop box with quick-change gears.
In just his first year pulling the truck, Cory couldn't be more satisfied with the results. "It has been a great year working with all of our sponsors, and Woodruff Diesel has built us an awesome engine. I never dreamed that in the first year we would already have six wins, and be Region III champion in NTPA." Aside from a little trial and error in its inaugural pulling season, we'd say Cory's truck is definitely something to be proud of, and is a nice addition to one heck of a sled-pulling resume.