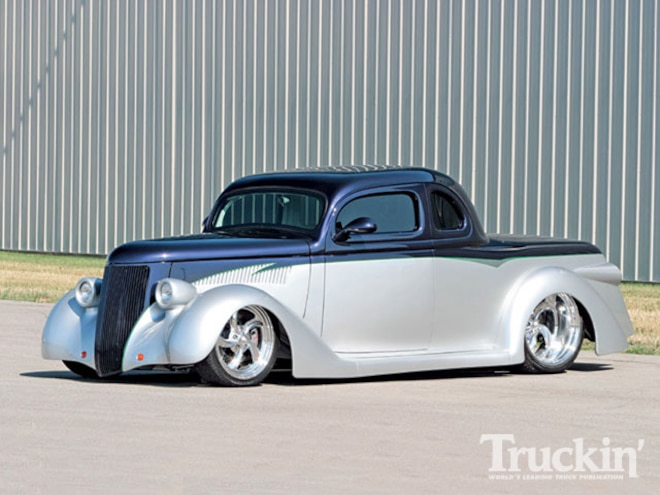 View Photo Gallery | 16 Photos
Photo 2/16   |   1936 Ford Ute left Side Angle
Paul Knowlson was in search of a '36 Ford pickup to take him back to his teenage years when he owned a '36 Blue Oval pickup. One day he received a phone call from a woman in Australia and she told Paul she had a '36 Ford, but it was a Ute. Knowing about the rarity of a '36 Ute, Paul made the woman an offer she couldn't refuse. It was only the body, less frame, engine, drive train, and interior. The Ute was crated up then shipped in a sea/land container and delivered to Paul in Muskegon, Michigan.
His unique '36 Ute body was mated with a '39 Ford pickup frame then trailered to Geralds's Hot Rods in New Paris, Indiana. Shop owner Gerald Kupeerus and Kevin Yankey collaborated with Paul sketching out their visual ideas for Project Ute. After discussing, reviewing and making changes to renderings they decided to maintain the classic hood, grille, headlights and fenders up front. The rear portion would take on a more radical appearance, while still maintaining its original shape. After their final discussion and agreements, Gerald assigned the project to Kevin Yankey, who at the time was only 25 years old, to build Mr. Knowlan's '36 Ute. The overall journey took Kevin seven years to complete.
The foundation of the Ute is a '39 Ford frame. Its rails were boxed and a TCI front cross member with independent front suspension was fused between the framerails. A Chevy 350ci small-block mock-up engine and 700-R4 automatic transmission were used to locate the engine and tranny mounts that were then welded in place. The removable transmission crossmember was then located and bolted to the framerails. The Ute's front suspension is vertically lifted by a pair of Air Ride Technologies Shockwave adjustable airbags. The front end rolls on a pair of polished billet aluminum Colorado Custom Slater Superior 18x7-inch wheels with Michelin 215/35ZR18 rubber. A pair of Baer brakes with 14-inch diameter cross-drilled rotors and four-piston calipers are responsible for decelerating and stopping the front rotating mass. A Flaming River power steering rack system takes the grunt out of turning left and right. The rear suspension is an Air Ride triangulated four-link system with coilover shocks and Shockwave 'bags. Looking under the rear fenders, aluminum Colorado Custom 20x12-inch Slater Superior wheels are wrapped in chubby 315/30ZR20 Michelin rubber. To handle the massive rear polished billet wheels and wide tires, Kevin had Moser Engineering in Portland, Indiana, narrow the Ford 9-inch axle housing and '70 Ford Torino 31 splined axles a total of 5 inches. Before the axles were slid into the rear housing, a set of Richmond 3:56 gears were stuffed inside the differential. A pair of 14-inch rotors and four-piston calipers were hung on each end of the Ford 9-inch to brake the horsepower when needed.

View Photo Gallery | 16 Photos
Photo 6/16   |   A Street & Performance fuel injection system maintains constant nourishment for the muscle.
The Ute's muscle comes from a '02 GM Performance 454ci big-block with 535 hp complete with a Street and Performance fuel injection system. All of the external aluminum accessories have been polished: valve covers, breathers, ignition wire spreaders, air cleaner cover, air intake, intake manifold, and fuel rails, the alternator, Vintage Air compressor, and Billet Specialties pulleys. An MSD Blaster HVC ignition coil and MSD 6A ignition control box deliver plenty of charge to the MSD distributor that sends strong electrical pulses through the MSD 8mm ignition wires to the Champion spark plugs. The four-row Be Cool aluminum radiator and Spal auxiliary dual electric fans guarantee cool engine operating temperatures. A pair of Sanderson stainless steel 2-1/2-inch engine-hugger headers collect into a 3-inch diameter stainless steel exhaust that flows through a pair of stainless steel Borla mufflers. The engine was fine-tuned on the engine dyno by the team at Pro Motor in Goshen, Indiana. A GM 700- R4 automatic transmission from Coan Racing in Kokomo, Indiana, was installed and equipped with a high performance servo, high performance bands, a heavy-duty 3-4 clutch pack, and a 30-spline torque converter. The 700-R4 gear selection is accomplished by the action of a B&M shifter. A B&M auxiliary transmission cooler is mounted under the frame to maintain normal operating temperatures of the transmission. The 700-R4 tranny was linked to the Ford 9-inch with a 48-inch long polished aluminum driveshaft. The electrical juices are stored in two Optima yellow top batteries that pass through two fuse panels. Besides the primary panel, a secondary panel connects power to the door actuators, windows, lights, horn, and auxiliary dual radiator fans.
It's ironic as I write this feature of Paul D. Knowlson's incredible '36 Ford Ute pickup, that the United States is going through some financial rough times. The Ford Ute was founded as a result of the 1929 Great Depression. The banks had no money to loan the people and businesses of America. Factories were closing down, including the Ford facility in Australia. The farming industry, with assistance from the auto industry, designed a utility vehicle that could carry the family to church, shopping, and during the week it could be used as a vehicle to transport produce or animals to market.
The developer of the Ford Ute was a young engineer by the name of Louis Brandt. He designed the Ute pickup by removing the trunk area of the 5-window coupe and constructing a pickup bed that was attached to the back of he coupe body. The banks agreed to loan money to Ford for the Ute's construction and sold it as a utility commercial vehicle. A few of these cars were built in 1932 through 1935. By 1936, Ford authorized their Australian plant to build 400 units from the United States-produced 1936 Ford coupe car. They produced 118 units and this unit is one of the last remaining 1936 Ford Ute's in the world. Paul informed us there are less than five in operational condition. The Australian automotive enthusiasts love their Ute's. They are cherished like the Ford Model A is here in the United States.

View Photo Gallery | 16 Photos
Photo 10/16   |   1936 Ford Ute left Front Angle
Kevin began his metal sculpturing quest with dedication and determination of creating the worlds most beautiful Ford Ute ever to be built. The body was stripped down to bare metal and then evaluated. There were some areas that needed extra attention but for the most part, the body was in pretty good condition. The Ute's profile was altered by chopping and raking the roof 3 inches in the front and 2 inches in the rear. Not wanting to turn the rear window into a mail slot, the original height was preserved by taking the 2-inch chop from underneath the rear window. The doors were cut off at their bottoms to allow proper clearance of the front fenders when they were opened. A pair of custom rocker panels were fabricated and fitted between the doors and custom-made fiberglass running boards were grafted. The body was channeled 3 inches. The four-way opening hood was welded, shaved, and smoothed at the top. Then the sides were cut off, allowing the top portion to be hinged and the sides to be removed. The hood sides and front inner fenders were louvered for style and function. Kevin cheese grated 4 inches off the bottom of the '36 Ford grille, then massaged it back to shape to fit between the front fenders. The Rocky Mountain door hinges deliver both strength and precision pivot points as the doors open and close. A pair of Bear Claw latches maintain a continuous grip when the doors are closed and release freely on command. Kevin created a wooden buck to form the aluminum tonneau cover. A pair of aerodynamic Prowler side mirrors provide Paul with plenty of rear peripheral vision.
After numerous man-hours of body mods and preparation, DuPont sanding primer was applied. Kevin performed endless hours of block sanding to achieve perfectly straight and smooth body surfaces. After the final block-sanding session, Kevin applied a DuPont sealer coat to the primer. The Ute body was then rolled into Gerald's paint booth while the doors, hood, side skirts, and tonneau cover were hung and laid on fixtures. Kevin wiped down the surfaces with DuPont degreaser and tack rags. After masking and draping the body and hood side skirts, Kevin prepared the first DuPont color, Chrysler Prowler Silver, which was applied to the lower portion of the body, fenders, doors, and hood side skirts. Then the DuPont Lime Green broad pinstripe was masked and sprayed. This was followed by the DuPont Mid-tone Gray graphic line below the green, and finally the Amethyst purple was applied. After letting the colors cure, Kevin then applied eight coats of clear, wet sanding between each coat to acquire endless depths of the colors.
Another remarkable feature of the Ute is the audio and video system that was integrated into the cab's custom interior and underneath the tonneau cover. The system is comprised of an Alpine head unit, Alpine DVD player, Alpine GPS Navigation, Alpine CD 6-disc changer, two V12 Alpine Amplifiers and two 10-inch Type-S subwoofers. A total of six 61/2-inch mids are located in the kick panels, door panels, and under the tonneau cover, a 15-inch flipdown Boss Monitor provides on-lookers with added entertainment. Opening the doors exposes us to a one-off custom interior. Kevin crafted a one-piece wraparound fiberglass dash and center console that houses a set of custom-made Auto Meter Ultra Light speedo, tachometer, fuel and oil pressure gauges and a Vintage Air aluminum control panel that is flanked by a pair of Vintage Air aluminum vents. The center console contains more Auto Meter Ultra Light gauges, two engine block water temperature gauges, one voltmeter, and an Air Ride Technologies pneumatic 'bag control panel. The crew at Krist Kustoms, in Fort Wayne, Indiana, created the incredible leather interior. A pair of '95 Eagle Talon bucket seats were stripped then covered with plush white leather, along with the custom door panels and headliner.
Kevin Yankey would have made Lewis Brandt, the designer of the '36 Ford Ute, very proud. This one-of-a-kind custom has received Best of Show awards wherever it has been displayed. I have photographed thousands of custom trucks over my career and I must say this is one of the most unique and beautiful ones I have captured in my cameras lens. Paul Knowlson, for all your hard work trying to locate one of the last five Ford Utes left on the planet you must be commended. I must also highly praise the incredible vision, creativity, and superior craftsmanship that builder Kevin Yankey performed throughout this rolling metal sculptured masterpiece.