Never-Ending Love For A Son 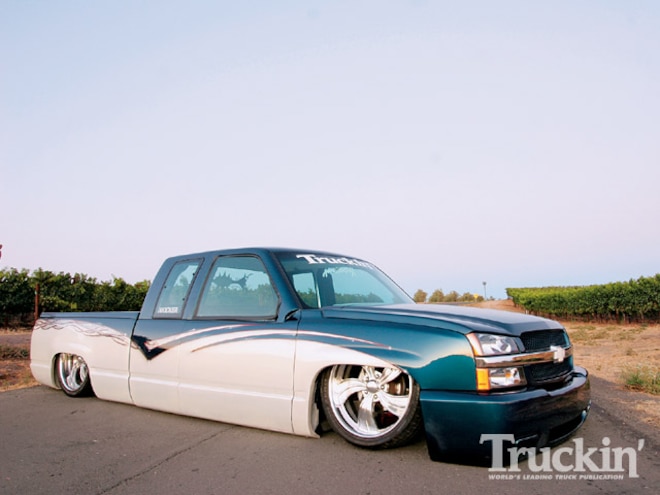 View Photo Gallery | 16 Photos
Photo 2/16   |   1997 Gmc Sierra right Front Angle
Love can be simply defined as unselfishly and consistently placing someone else's needs before your own. Being a father changes a man. Love that was never known before suddenly erupts when the eyes of your child lock onto you. That kind of love isn't always talked about at a truck show, hot-rod get-together, or inside your garage as you're wrenching on your ride. Ren Robinson, of American Canyon, California, loves his son Chris and if that doesn't make you like him, the story of Chris' truck build surely will.
Chris was diagnosed early on with a rare visual impairment due to damaged nerves in the back of his neck. Because of this, Chris will never be able to drive. It's a shame, because when most kids were hiding adult magazines under their mattresses, Chris was sneaking Truckin' into school to read during class. He can't get enough of the custom truck scene: shows, cruises, get-togethers, he loves all the aspects. With such a dedication, Ren knew he had to do something special for his only son. And special is what he did. 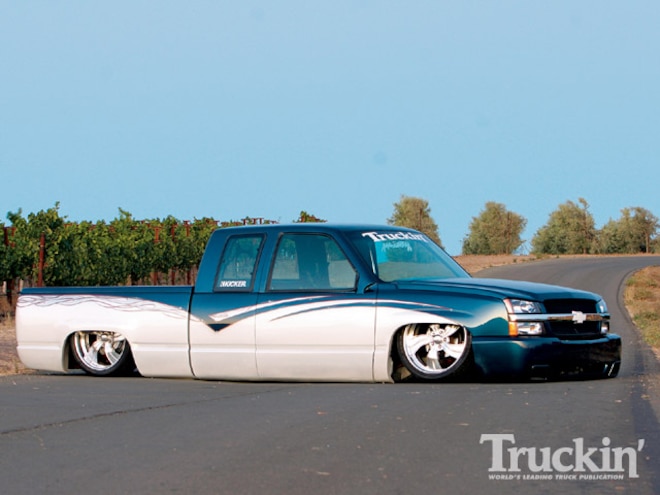 View Photo Gallery | 16 Photos
Photo 3/16   |   1997 Gmc Sierra right Side Angle
For Chris' high school graduation gift, Ren unveiled a fully custom '97 GMC Sierra that was nice enough to grace the cover of the Robinson family's favorite truck magazine. Now when Chris is riding shotgun, he can hit the switches and throw sparks up and down the wine country. A father's love never ends.
The truck build began in May '06 when a pieced-together '97 GMC was purchased. As a fanatical member of AcrophobiA (AA) truck club, Ren immediately picked up the phone and contacted fellow AA member Eli Barro, of Ceres, California, who owns Air Concepts. Ren and Eli discussed a game plan to put the GMC on the pavement while updating the look with a new front end. Eli wasted little time getting the welders out as the factory frame was modified by using 2x4-inch box steel to create a stock-floor body drop. With Belltech drop spindles, Air Ride Technologies Strong Arms, and Slam Specialties airbags, the GMC sat nice and low. Out back, a KP Components six-link and KP Watts linkage bring the GMC down low with help from the Slam Specialties 'bags. This stance was low enough as Eli let the air out of the 'bags and the '98 GMC extended cab was literally on the ground. A different cab was used because the '97 cab wasn't in as good of shape as the guys had hoped. Stuffed inside each fender are 22x81/2-inch Intro Vista II Twisted 5 wheels wrapped in Pirelli 265/35R22 tires. The overall look was just what the Robinson crew was hoping for, but the '97 GMC front end didn't have them jumping with excitement. Eli went back and grabbed his welder and got to work.

View Photo Gallery | 16 Photos
Photo 10/16   |   1997 Gmc Sierra right Rear Angle
Ren went out and picked up an '03 Silverado hood, grille, and fenders and delivered them to Air Concepts. With parts in hand, Eli went to work building a custom wiper cowl to accommodate the larger hood, sectioned the '97 and '03 fenders making them one seamless piece and brought the Silverado SS bumper up closer to eliminate the factory gap. Eli also went ahead and shaved the door handles, third brake light, wipers, and mirrors. A straight '94 bed was tracked down and the not-so-straight '97 bed was scrapped. With a good bed ready, Eli shaved the taillights, added a roll pan, and welded the tailgate shut. A subtle but sick detail is the lower body line wrapping around the entire bed and tailgate and the grafting of '03 Chevy fender flares onto the bed sides. Small 71/2-inch LED taillights from AVS were welded in and keep the police away from the truck. Inside the bed, an 8-gallon fuel cell from Summit Racing was mounted with a custom sheetmetal cover, a sheetmetal bed with wheel tubs was welded together and the bed was sprayed with Line-X, save for the painted bridge cover with custom chromed AA logo. Richard Galindo, of Cen-Cal Customs then stepped in and applied the House of Kolors paint. Real Teal was sprayed up top with Snow White Peal and Ice Pearl applied on the lower half with silver metal flake flames adding some hot-rod styling. Each flame was pinstriped in red and Richard finished off the truck by airbrushing a Cen-Cal crown on the tailgate.
Moving inside the shaved doors, Air Concepts rolled several sheets of steel, welded, patched, and grinded the assembly into a flowing sheetmetal dash. That dash was painted to match the body and then fitted with a custom center console also built by Air Concepts. That console houses a Dakota Digital gauge display for a '55 Chevy and a 33-inch LoKar shifter for the ultimate in custom retro looks. Brian's Auto Upholstery, in Benicia, California, wrapped a pair of '01 Honda Civic seats in white leather with silver glitter vinyl accents to keep the old-school look. He also laid down the grey carpet with white rolled edges to keep things looking clean. A white suede headliner and the addition of the custom B.A.D. billet steering wheel modeled after a '63 Chevy wheel completed the interior. Sitting in a nice setting is fun, but it is much more entertaining with your favorite jams playing. Cen-Cal Customs helped the Robinson family out by building a fiberglass box to house two 10-inch Kicker Solo-Baric subs and two Kicker amps. Custom fiberglassed door panels are the home to a pair of Kicker mids and highs. Robert Espejo wired the system and the input is controlled thanks to an iPod hookup only, no clutter found here.
Finishing off the Sierra/Silverado, Ren added a K&N intake, billet pieces from Empire Motorsports, and relocated the Optima battery using a Summit battery tray. Now Chris and Ren had themselves a truck worthy of a throwing sparks down wine country while one drives and one mans the switches. As with any project, the men of the Robinson family wanted to thank Mrs. Rose Robinson for her understanding and support, and Eli at Air Concepts for all of his hard work and skill. Do you have a son? If so, spend some time with him and let him know how important he is to you.