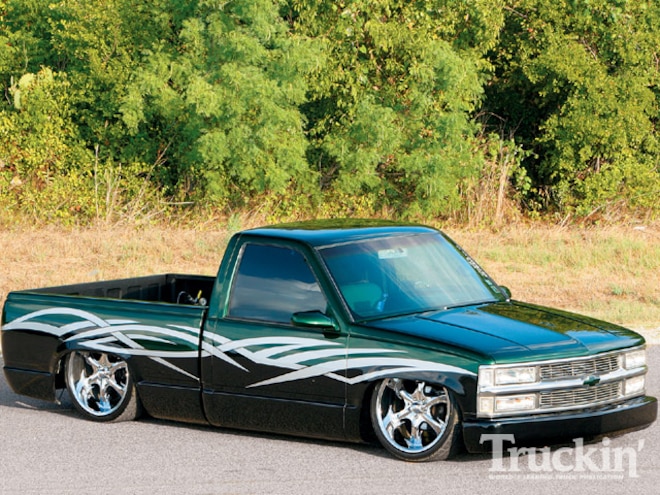 View Photo Gallery | 6 Photos
Photo 2/6   |   1997 Chevy C1500 right Side Angle
Few of us are lucky enough to turn our hobby into a job. What you see before you is Chris Biera's first truck build. The 25-year-old used his part-time job at Superior Paint Customs in Abilene, Texas, to build this truck and glean the knowledge necessary to build custom trucks for years to come.
With the help of Andy Young and the crew at Superior Paint Customs, the stock '97 C1500's sheetmetal began its transformation. The truck's door and tailgate handles were shaved along with all three brake lights, the bed's stake pockets, and the antenna. To make room for the suspension, new wheeltubs were fabricated, along with a sheetmetal notch. The bed also received a welded roll pan before the interior of the bed, minus the notch, was given a spray-in bedliner. At the opposite end of the truck, the factory bumper was smoothed and Chris upgraded the headlights with HIDs. When all of the truck's surfaces were ready for paint, Andy Young filled his gun with several colors of Matrix paint, from the candy green on top to the black with green pearl on the bottom, and finally with the silver for the tribal graphic in the middle. 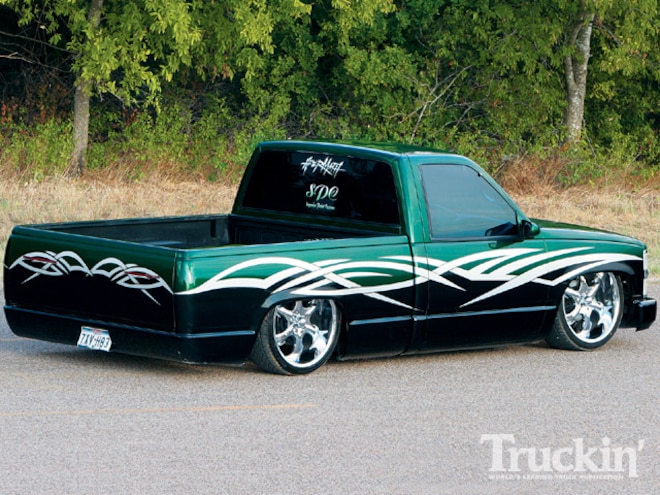 View Photo Gallery | 6 Photos
Photo 3/6   |   1997 Chevy C1500 right Rear Angle
Before he could put the gun down, Andy also applied the black and green Matrix paint to the smoothed '95 Silverado dash that was swapped in. Chris then turned to Lone Star Trim, also in Abilene, to wrap a set of '95 Tahoe bucket seats in green and black leather. Once a sufficient amount of black and green filled the interior, Chris brought in the billet. A Billet Specialties Chicayne steering wheel with Bow Tie center cap was mounted to the column along with a billet shift handle. Additional billet can be found on the window cranks, door handle surround, and on the HVAC controls. No show truck would be complete without an audio system, so Chris wired one up himself. Starting with a Pioneer AVH-5700 DVD head unit, he added two Rockford Fosgate subwoofers in a sealed enclosure built by Audio Magic in Abilene. The subs are powered by a Rockford Fosgate T3002 amp and the RF T-series coaxials are powered by the head unit.
Killer Ridez in Seagoville, Texas, took it upon themselves to make sure the 1500 had a reliable air suspension. Using Slam Specialties RE7 'bags, DJM spindles, and Monroe shocks, the Chevy's front suspension dropped to the tarmac. In the rear, Killer Ridez got a little creative, as they fabricated a wishbone three-link to avoid any problems with the stock gas tank. The same RE7 bags and Monroe shocks were used to finish up the rear, and Chris was finally ready to bolt on his 22x91/2-inch Martin Brothers Sharktooth wheels and 265/35R22 Falken S/TZ04 tires
The 1500's 4.3L V-6 had plenty of power to cruise to and from shows, but we all know that we can't leave well enough alone. Chris added a 2-inch Flowmaster exhaust system that woke the V-6 up, and used his newly-acquired painting skills to matching the fan shroud and intake to the exterior of his truck. The only other addition under the hood is an Optima battery to keep the audio system happy. Chris has ambitious plans for this '97, as a stock-floor body drop has been considered that would put the 1500's rockers on the ground with 24-inch wheels. Best of luck Chris, we're sure it would look even better! Chris wanted to send out thanks to all of those that helped him finish his truck, including Andy Young, Greg Regan, Audio Magic, his club, Aftermath, and Angela for being supportive of the build.

Truckin
Truckin
Busted Knuckles - 1997 Chevy C1500
This installment of Busted Knuckles features a 1997 Chevy C1500 built by Dylan Dirickson.
Grant Cox – Jan 18, 2016
Truckin
Truckin
1989 Chevy C 1500 - Engineered to Win
We wanted to do something a little different for this special feature, so rather than interviewing a...
Mike Alexander – Jan 26, 2015
Truckin
Truckin
1994 Chevy C1500 - The Switch
There are two constants in the custom truck world. One, trucks laid flat on the ground are nothing s...
Mike Alexander – Dec 1, 2014
Truckin
Truckin
1994 Chevrolet Silverado 455ci Big-block - Korrupted
Chad Moline, of Rock Falls, Illinois, elected to use a 455ci Oldsmobile big-block for his 1994 Chevr...
Patrick McCarthy – May 28, 2014
Join Our FREE Truck Trend Network Newsletter