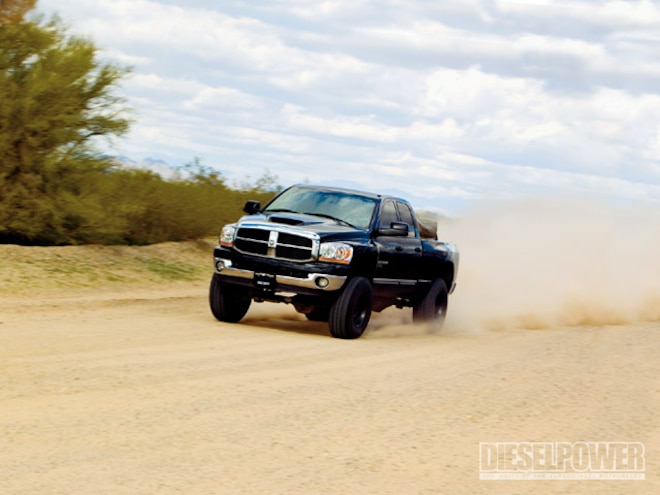 View Photo Gallery | 12 Photos
Photo 2/12   |   2006 Dodge Ram 3500 left Front Angle
We have shown you plenty of purpose-built trucks on the pages of Diesel Power. Work trucks, dedicated sled pullers, race-only drag trucks, you name it. Tracy Jordan is a little different though, with his purpose-built '06 Dodge Ram 3500. As a professional rockcrawler and racer, Tracy has been behind the wheel of plenty of purpose-built vehicles, from his Spidertrax Rock Bug to the BFGoodrich-sponsored Wide Open Baja Challenge buggy that he piloted in last year's Baja 1000. Tracy's Dodge is a different kind of purpose-built vehicle though. He built it specifically to travel as quickly as possible from his home in Wittmann, Arizona, through desert washes and arroyos, to his parents' nearby home. Sure, he could have built a truck for the asphalt, but Tracy Jordan knows the shortest distance between two points is a straight line, and sometimes that line isn't paved.
No Turning Back
Tracy started with an '06 Dodge Quad Cab shortbed from Dave Smith Dodge in Coeur d'Alene, Idaho. He then took the truck directly to the late Greg Boardman at Desert Racing Concepts to work his magic. Glassworks Unlimited fiberglass front fenders bolted in place rather easily, but the bedsides required more...commitment. "It was a bit unnerving cutting the sides off of the bed with only 800 miles on the truck, but once I rode in Greg's truck I knew it was the right thing to do," Tracy reflected. Boardman had the fenders, bedsides, and SRT-10 hood painted to match the factory black before bolting them in place. The bulged fenders add tire clearance and made room for 37-inch BFGoodrich Baja T/As without limiting compression travel. 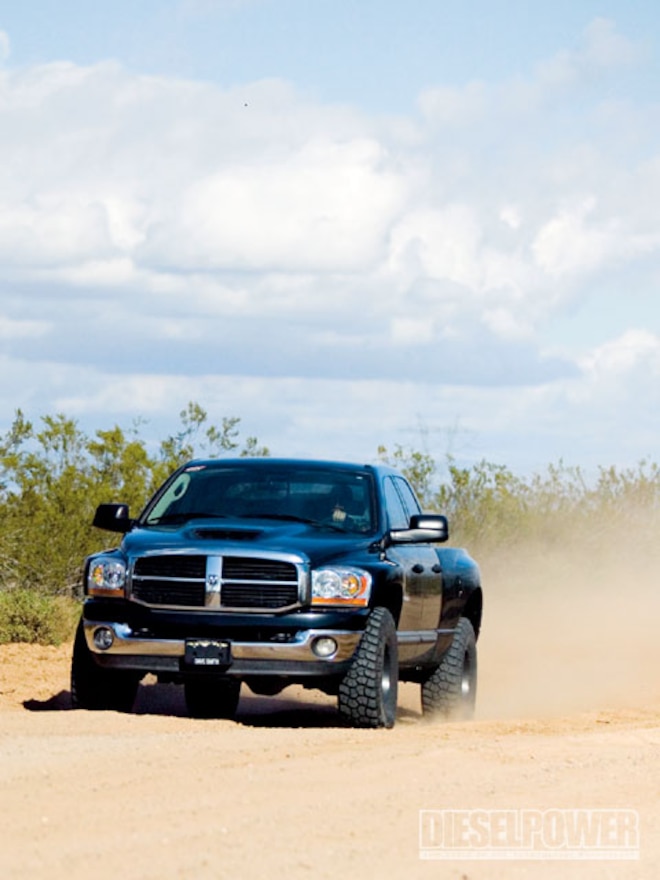 View Photo Gallery | 12 Photos
Photo 3/12   |   2006 Dodge Ram 3500 front Angle
The suspension travel comes from a KORE Technical Series suspension that transforms the 7,000-pound diesel truck into a desert-devouring machine. The suspension uses KORE progressive-rate springs in the front and Deaver leaf packs in the rear in conjunction with Fox Racing 2.5-inch remote reservoir shocks valved to KORE's exacting specifications. The front shocks sit on raised billet aluminum towers, which allow the fitment of a longer shock and increase wheel travel to an impressive 11 inches. Additional considerations such as the Fox Racing steering damper, billet 7075 aluminum control arms fitted with Evo joints, and upgraded track bar, complement the springs and shocks to provide an excellent ride and increased durability.
Second Thoughts
While Tracy's truck soaked up desert terrain with ease, the Baja T/A tires rode rough on the street and the Deaver springs compressed to the bumpstops when Tracy hooked his trailer up to the back of his Dodge. After a significant cash outlay, Tracy began to wonder if he had made the wrong decisions with his truck. To make matters worse, Tracy added larger injectors and his exhaust gas temperatures (EGTs) were soaring to unsafe levels even when the truck wasn't burdened with a trailer. At one point he seriously considered cutting his losses and selling the Ram.
Problems Solved
In the end, Tracy came to his senses and resolved the issues with the truck instead of starting over from scratch. Thirty-seven-inch BF Goodrich Mud Terrain KM2 tires were mounted on the Teflon-coated American Racing Chamber rims in place of the Baja T/As. "The Baja tires have Kevlar sidewalls and can withstand an enormous amount of abuse," Tracy explained. "But that strength comes at the cost of ride comfort. Also, the Baja T/As are designed to provide less traction on some surfaces than the KM2s that I am running now." One problem solved, but there were still several more to go. The flexible Deaver springs are supplemented by a pair of Firestone air springs when the Dodge is called up for towing duty. "I really need long-travel air springs" Tracy admits, "but I just remove these when I am not towing. It takes ten minutes to take them on and off."
That left just the high cylinder temperatures to be addressed. "I got a B1 Bomber turbo from Turbo Auto Diesel and the difference was amazing. No more EGT issues and tons of added power with stock-like spooling." The turbo and Dynomite Diesel injectors are complemented by an AFE Stage II intake, Edge Juice module, and MBRP 4-inch turbo-back exhaust. The combination makes more than 400 horsepower and is routed through the factory Getrag G56 transmission and NVG273 transfer case. "I wanted to put my money into the suspension instead of the transmission," Tracy explained, "that is why I went with the six-speed manual."
More Than Just Desert
The interior of the truck is largely stock, with the addition of an Edge A2 monitor and Mopar seat covers. Tracy often uses his truck for hunting trips, as evident by the scratches that adorn both sides of the black beauty. Behind the cab, a rooftop tent sits atop a custom tubular rack and provides shelter without taking up bed space. By just folding out the tent, it automatically opens and is fitted with a foam mattress for a good night's sleep after a long day of hunting. Behind the tent, a TireGate carries a full-size spare, further preserving bed space since a 37-inch tire will not fit under the bed in the factory location.
While we did not have the opportunity to join him on a hunt, Tracy did take us along on the road that started it all. While racing across the dirt at a high rate of speed, we were impressed by how much lighter the Dodge felt with the addition of the KORE suspension. It was much more balanced and compliant than you would expect from a 3/4-ton truck. After arriving at his parents' house, Tracy glanced down at his watch and announced with a grin, "Twelve minutes to get here." Those twelve minutes make the long nights and problem solving all worthwhile. DP