And You Thought Olds Only Made Cars

With the demise of the Oldsmobile brand from the General Motors lineup several years ago, the current generation may not even realize that Oldsmobile was just one of several successful ventures created by Ransom Eli Olds. In his early years, Ransom E. Olds was granted many patents, which led others in the industry to label him one of America's most important automotive founders. 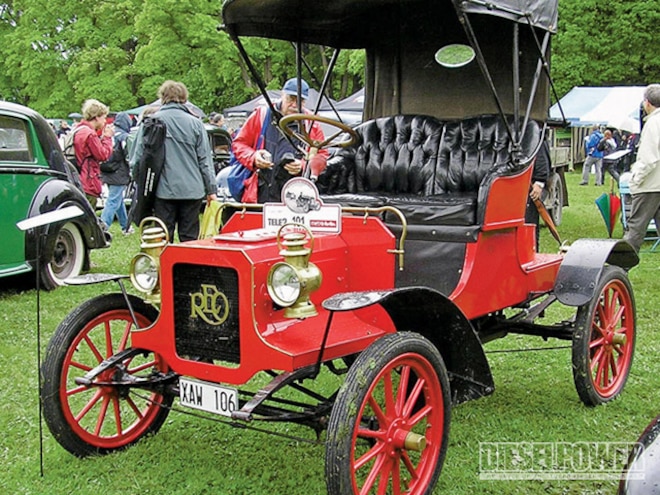 View Photo Gallery | 4 Photos
Photo 2/4   |   The 1906 REO Motor Car Company Model B runabout.
The Beginning
Born in Geneva, Ohio, on June 3, 1864, Ransom-the fourth son of a machinist father- moved to Lansing, Michigan, as a teenager. The family business, P.F. Olds and Son, was a small machine shop located in the heart of a growing industrial community. The firm specialized in manufacturing and repairing steam engines. As the third manager of the new business, Ransom learned a variety of skills necessary to enter a mechanical career. Like many others of this period, he didn't finish high school but managed to attend Lansing Business College.
An early high point for Ransom was his development of a steam engine equipped with a gas burner. Ransom installed his new creation in a small boat, then put another in a horse-drawn carriage. The steam engine worked so well in the car that he installed a companion mill to create a dual-motor machine capable of running at 15 mph.
Ransom became interested in the novel gasoline engine and traveled to the Chicago World's Fair in 1893 to see one run. This mill must have sparked his creative genius, as Ransom himself had a patent pending and an internal combustion engine of his own design in production by 1896. In fact, he was granted the first patent in the United States for an automotive carriage
Looking to partner with an existing carriage maker and expand his facilities, Ransom sought out investors. Edward W. Sparrow, a real-estate mogul, stepped in and helped launch the Olds Motor Vehicle Company in 1897. Sparrow became the president of the new company and immediately had problems with Ransom. So in twenty-four months, Ransom left the Olds Motor Vehicle Company and started Olds Motor Works, which merged with his father's machine shop operation.
A retired copper-mine mogul named Samuel L. Smith paid the bills this time and leaned on Ransom to move to Detroit. So Olds Motor Works, with its offices and plant located on the Detroit River, became the first permanent automotive manufacturer located in the Detroit city limits.
Olds Motor Works' first product was a curved dash runabout. Designed by Ransom, the simple machine was an instant hit with the masses. Professional people and women were attracted to this familiar buggy-like platform, and with a retail price of $650.00, 300 units were pre-sold before the company began production in 1901.
A massive fire in March of 1901 destroyed the entire Olds Motor Works factory, forcing Ransom to farm out most of the machine and subassembly work to outside vendors. Suffering from stress and health problems, Ransom also decided to move some of the production facility back to Lansing.
By 1905, Olds Motor Works production reached 5,000 units a year, largely due to Ransom's tireless efforts to promote, race, and improve his product. Automotive speed records took up some of his time, and because Florida's beaches offered the smoothest racing surface, Ransom began investing in real estate in the Sunshine State.
Trouble at the factory began again when Frederick Smith, son of one of the original backers, began interjecting his management views. Since Smith was the president and handled the sales end, tensions increased. When he entered the engineering side as well, Ransom terminated his relationship with Olds Motor Works.
Returning to his familiar Lansing base, he started the R.E. Olds Company. Threatened by several lawsuits from his previous business partners, Ransom renamed his new venture REO Motor Car Company. The REO brand was an immediate success, selling a record number of automobiles from 1905 to 1909. The REO brand proved more profitable than his original Olds Motor Works, which had become part of General Motors.
Management conflicts occurred again at the REO Motor Car Company, though this time Ransom kept his hand in its operation. With the fall of the stock market and the beginning of the depression years, Ransom became more and more active, returning to the head chair in 1934. Ransom attempted several new projects, including a smaller REO automotive platform, a delivery van, and an enlarged transit bus line in 1934. But by 1936, the REO-branded automobiles ceased production, and Ransom retired from the automotive industry.

View Photo Gallery | 4 Photos
Photo 3/4   |   reo Speedwagon logo
The Truck Side
The REO Motor Truck Company was organized as a subsidiary of the REO Motor Car Company and began truck production in the later part of 1910. Two years earlier, however, the REO car division was producing one-cylindered Model H vehicles on special order basis. Two versions of the Model H were offered-a basic motorized wagon, and a more civilized semi-enclosed Express. Both offerings were mounted on a modified automobile chassis. The standard gasoline-powered engine was a single-cylinder unit, which produced 12 horsepower. REO's double chaindrive supplied power to both rear wheels that were mounted on roller bearing axles. These 3/4-ton tucks were $750.
REO increased its truck lineup at the beginning of World War I to include an $1,800 2-ton Model J. Powered by gasoline four-cylinders, the high-end trucks featured load capacities of up to 5,000 pounds. During this early period, REO trucks were considered to be the gold standard in many commercial circles.
The Original Speedwagon
The company introduced its legendary Speedwagon truck in 1915. The Speedwagon was the forerunner of today's pickup. Its sales success was copied by the competition, with sixty individual variations soon appearing. By 1925, REO's original concept was blurred entirely.
REO's Speedwagon continued to offer industry firsts: electric starters and lighting, shaft-driven axles, and pneumatic tires mounted on steel wheels. The company expanded the option list for its lightweight Speedwagons and added heavier versions with up to 2 tons of capacity. In reality, the company dominated the commercial truck field. More than 125,000 Speedwagons were produced by 1925.
Following the General Motors model, REO's management team expanded the automotive line with the additions of the Flying Cloud and Wolverine series vehicles. Company profits were utilized for model expansion, and when the market bubble burst in 1929, the company suffered. In 1933, Ransom returned to the company to retain leadership.
REO entered into a sales agreement with Mack Truck in 1934 to offer the lighter REO line in selected Mack dealerships. The deal was intended to broaden REO's exposure, and thus increase sales. In January of 1936, REO went so far as to produce a Mack Jr. light-truck line. Sadly, both of these programs failed to generate sales success. Other company programs, including a concept delivery van, a Flying Cloud transit bus line, and a new four-cylinder small car, were all stillborn. Finally with the demise of full-sized automobile platform production, the company was forced to declare bankruptcy in 1938.
A reorganized REO Motors emerged in 1940 as a result of government intervention. During this reorganization period, REO's styling studios were busy preparing a new Moreload Speedwagon vehicle. Though interest in the new Speed Wagon was high, the civilian market would have to wait, as 100 percent of the company's production was turned over to the government during World War II.

View Photo Gallery | 4 Photos
Photo 4/4   |   An REO Speedwagon fire truck at the Jack Daniel's distillery in Lynchburg, Tennessee.
War And Forward Progress
The REO Motors company played an important role in supplying the allied forces with 29,000 vehicles for the war effort. Financial stability returned, and the military contracts provided funding for civilian market research, along with upgraded styling.
REO went forward with the introduction of '47 models, which focused on heavier-duty platforms. The Model 30 and Model 31 broke the conventional truck styling mold with a radical new look, and REO Motors went after new business with the government. The result was a new contract for an Army icon, the construction of 17,132 Eager Beaver 2 1/2-ton M34 6x6 trucks.
Diesels Appear
REO Motors offered diesels for the first time in 1953, with the inline 401ci Cummins JBS-600 and the Buda 6 DTS-486 each developing 150 hp. A new Class 8 cabover tractor appeared the same year. Several versions of the chassis were introduced throughout the '50s. A tandem dual-rear-axle truck appeared in 1956 with an optional 175hp 401ci Cummins JT-6B engine. The diesel-powered B and BL conventional series appeared in June of 1957. Three 4x2, four 6x4, three off-highway, and six tractor platforms were produced. A variety of front-axle positions were offered to suit government standards. Nine Cummins engines were available, delivering 175 to 335 hp.
Merger And Demise
Bohn Aluminum and Brass purchased REO Motors in January 1955. This relationship was short-lived, however, as it sold the assets to White Motor in 1957. The new REO division was watered down, as White dealers began selling REO and Autocar trucks and parts side by side. White's main interest was in REO's Comet line of gasoline engines, which were utilized in White trucks.
White also swallowed up Diamond T in 1958 and moved production to Lansing in 1960. This move created a Lansing division for REO and Diamond T. Both marques were produced until 1966, when the brands were combined to form Diamond-REO. DP