The Little Truck With The Big Engine View Photo Gallery | 4 Photos
Photo 2/4   |   2009 Chevy Colorado left Front Angle
We were eager to finally get seat time in a V-8 Colorado, and after driving a stripped four-cylinder model, the thought of an extra 115 hp had us conjuring up scenarios of surprising unsuspecting muscle cars at stoplights. Luckily for us, for the sake of our driving privileges and insurance rates, we kept our driving fairly civil, although it was hard to keep our foot out of the 5.3L's throttle. Those of us who were used to the four-cylinder Colorado were wowed by the dramatic improvement in throttle response and acceleration, while other staff members expected more. This is after all a small truck wrapped around an engine with more power than most fullsize trucks had 10 years ago. With a 3.42 ring and pinion and four-speed automatic, the Colorado really hit its stride after the tach rose above 3,000 rpm. We can only imagine what 4.11 gears would have done, or better yet, the 6L80E six-speed transmission from the Denali. 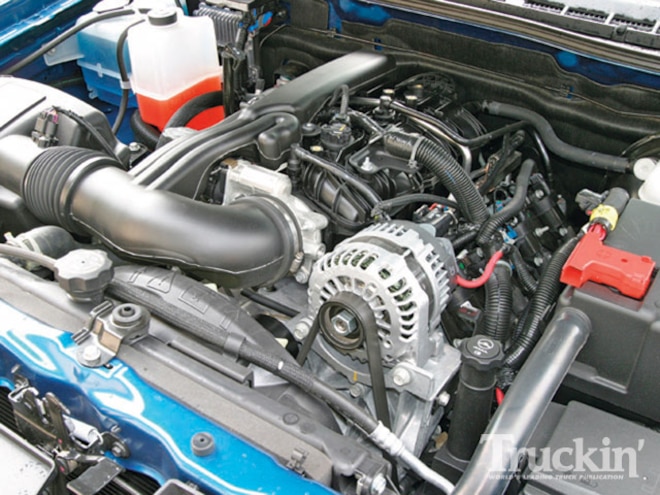 View Photo Gallery | 4 Photos
Photo 3/4   |   Without enough room under the cowl for the normal engine cover, the intake and all of its baffles are in plain view. Still, 300 hp between the framerails is a welcome sight.
To see how the 5.3L worked with the ZQ8 suspension, we took a little spin on the Angeles Crest Highway in southern California. Over the course of the nearly 75-mile round trip the windy mountain highway gains over 5,000 feet in elevation. The suspension, while not quite as forgiving on the potholes as the standard Colorado, was firm enough to grip the road through the twists with plenty of confidence. Even though one of our passengers was hoping for a brake pedal on the passenger side of the truck, the truck stayed planted and the tires didn't squeal in protest. This is likely the closest you're going to get to sports car handling in a factory truck suspension. With plenty of low-end torque on tap, the majority of the ascent was handled in fourth gear with the engine loafing around at about 1,200 rpm, with speed varying between 40 and 55mph. Aha, so there was a plus side to the high gearing.
Like we said before, we were trying out the acceleration of the 5.3L at every opportunity without getting ourselves into trouble. We also pushed it through some steep, curvy roads. We never used cruise control and never had it on the highway for more than 20 miles at a time. After all that, we were imagining the worst come fill-up time. To our amazement the 5.3L returned 17.7mpg out of the Colorado, right in line with its 15/21 EPA rating. It seems like anyone with a light foot could do much better, although anyone with a light foot might as well buy the four-cylinder. 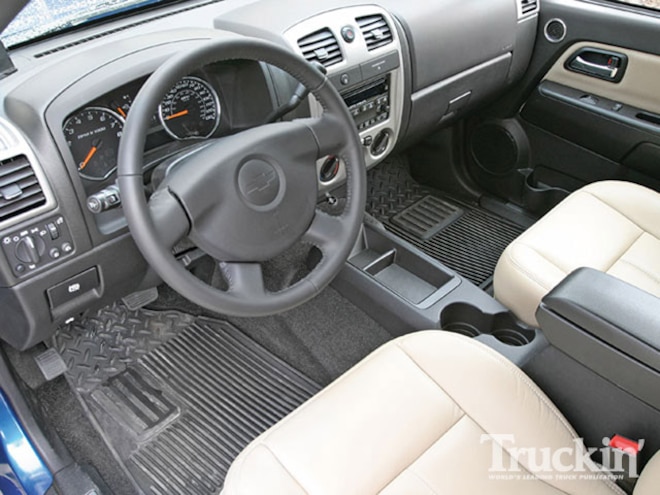 View Photo Gallery | 4 Photos
Photo 4/4   |   2009 Chevy Colorado interior
There are a few problems with offering a high-end Colorado like our 1LT-equipped V-8 model. For one, it's expensive. Our Crew Cab 1LT Colorado carried with it over $6,000 in options. Almost $4,000 was for the engine, ZQ8 suspension, 18-inch wheels, and bucket seats. The leather upholstery, power sunroof, and locking rear differential made up the rest. Including destination charges, it brought the total up to $30,475, right into the realm of fullsize trucks. That's not to say that the problem is exclusive to GM, as the only other comparable truck, the Toyota Tacoma X-Runner, comes in at around the same price. It's like going into 7-Eleven and debating over the 20-ounce cup or the Big Gulp when the difference in cost is a nickel. Even if that 20-ounce will work just fine for you, the only reason you're not going upgrade to Big Gulp is if it doesn't fit in your cupholder. But, if you prefer handling to hauling, then this Colorado should be worth a test drive.
Highs:
* GM answered Colorado fans' prayers: small truck, big engine.
* Fun in the twisties.
Lows:
* Nearly as pricey as a fullsize, but not as refined.
* No six-speed transmission like the fullsize.
* Seats need more lateral support to keep up with the suspension.