2004 Chevrolet Silverado - On The Hunt 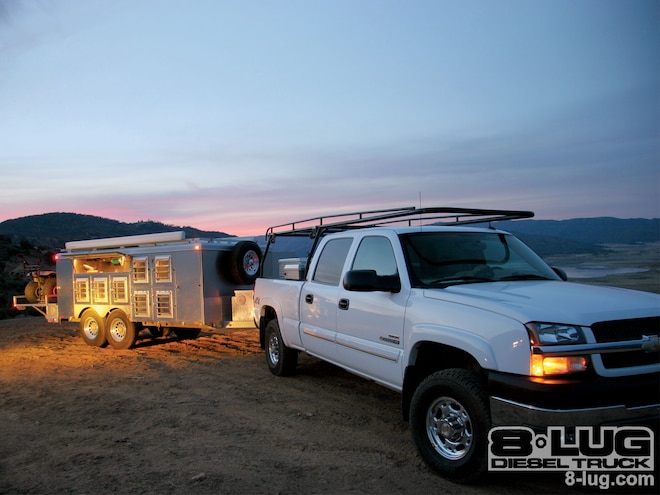 Editor’s note: This is the first in a series of Adopt-A-Truck articles where 8-Lug’s staff takes a daily driver under its wing and hops it up. Maybe you will be next!
Steve Raney’s Chevy Silverado looks a lot like any blue-collar truck in America, except maybe for the fact that when we met him, it was hitched to a 7,000-pound Deerskin trailer loaded down with 16 fidgety Labradors ready to fetch something that tastes a lot like chicken.
View Photo Gallery | 9 Photos
Photo 2/9   |   We met Steve Raney at an AKC hunt test, and learned that his ’04 Silverado was performing sadly and he needed to find a solution to his performance troubles.
There was really nothing exceptional about the Chevy. Even the paint scheme was a dullish white. It was just another diesel rig with plenty of miles on the engine—108,000 to be exact. These weren’t light-duty freeway miles either—they were tough towing miles, typical of a ranch truck that doubles as the family vehicle. But to Raney, the rig had promise. It better, everything he does at Raney Ranch revolves around this simple truck with its hand-fabricated rack on the top.
Raney is a professional gun dog trainer, and his 6.6L Chevy keeps the cogs of his training business turning, not unlike your local plumber, electrician, or carpenter. When Raney bought his ’04 turbodiesel, his thought was reliability. He needed a vehicle to build water and sewer lines, haul cattle feed, tow, and mend fences. Through the years, the work has taken a toll on the Chevy. It was seriously down in power—stressed by the constant tow of a trailer. So when the truck’s performance got iffy for the last time, Raney set out to find some answers.
The BackStory
To understand our involvement, you should know that 8-Lug magazine is about all ¾- and 1-ton trucks, not just those that are extreme examples of performance and good looks.

View Photo Gallery | 9 Photos
Photo 3/9   |   Steve Raney with fellow hunting dog enthusiasts, Bill Underwood (left) and Scott Wood (right).
We acknowledge that hunting has deep roots in America, and the hunter’s rig is aligned with that tradition. Oftentimes heeling beside the hunter is his faithful companion, the dog. With its brushy tail, big ears, and uncanny ability to fetch a shot waterfowl at 200 yards, trained field retrievers make average hunters look like sportsmen. Behind the scenes, it’s guys like Raney, who make it all happen.
Don’t compare his training to your backyard ball toss game with Fido. It takes months to train a single dog to hunt alongside a hunter safely, and it’s Raney’s job to work out the bugs before the dog is released into the field. In this case, if Raney’s truck can’t get to the field with the dogs, his business literally goes up in smoke.
Similar situations have played out in small towns everywhere with people who eye the truck as a tool of the trade. Fortunately on this day, 8-Lug was there to lend a hand, albeit, in the only way we know how. We saw this as an opportunity to transform a broken-down field hand into something more performance-oriented. It didn’t take long for others to rally behind us. Bert Heck of K&N Filters in Riverside, California, was one of the first.
View Photo Gallery | 9 Photos
Photo 4/9   |   The Chevy we adopted had 108,000 miles on it, and it tows a heavy trailer six days a week.
K&N Filters
While Raney didn’t have the time or even technical shrewdness needed to wade through all the products made for the Duramax, Heck, on the other hand, did. Heck factored Hypertech and MBRP into the equation, knowing that their products were going to be affordable and reliable. He estimated about four hours for the install…if we bought the pizza.
K&N Filters has an impressive shop adjacent to its main headquarters. It features dual in-ground dynamometers, a standalone lift, and a bevy of sophisticated tools and welding equipment at the ready. With the dyno, we would see the results of K&N’s labor immediately.
As mentioned, the parts list included Hypertech’s Max Energy Power programmer, an MBRP Pro-Series cat-back exhaust (T-304 stainless, high-flow seamless muffler), and K&N’s Generation II FIPK® intake system. In Heck’s eyes, these were the type of products that working diesel trucks could use.
View Photo Gallery | 9 Photos
Photo 5/9   |   Bert Heck of K&N Filters jumped in to help us with Adopt-A-Truck. He made the calls to Hypertech and MBRP, which supplied product for the build.
The Dyno
In stock trim, Raney’s rig made 184 hp and 307 lb-ft (3,150 rpm) of torque at the wheels. The Chevy needed a bigger bump in performance for the type of towing Raney was doing, so we crossed our fingers and watched as the wrenches spun.

View Photo Gallery | 9 Photos
Photo 6/9   |   The Deerskin trailer was custom made for Raney’s line of work. It is loaded with all the training equipment a dog handler might need, including a couple of ATVs.
With something so simple as a K&N intake kit, we actually made an immediate improvement. The Gen II FIPK from K&N is a direct replacement for the factory air box and allowed generous amounts of air into the combustion chamber. It snagged 6 hp and 8 lb-ft of torque in less than an hour. We were up to a total of 190 hp and 315 lb-ft of torque.
Next came the Hypertech Max Energy Power programmer. We dialed it in on Stage 3, the highest setting allowable, and waited for the results. We saw a gain of 17 hp and 30 lb-ft of torque over stock.
Things were really looking up. Lastly, we installed the MBRP cat-back exhaust and got a quick 4 hp and 7 lb-ft of torque bump. Within four hours, we had a peak horsepower curve of 211 hp with 353 lb-ft of torque at 3,150 rpm. That’s a total gain of 27 hp and 45 lb-ft of torque to the wheels—over stock.
View Photo Gallery | 9 Photos
Photo 7/9   |   It’s not the Ritz, but these fellows don’t mind the ride.
In the next issue of 8-Lug, we’ll continue our visit with K&N Filters to show you the step-by-step process of this issue’s Adopt-A-Truck project. While we’re at it, we’ll also highlight what happens when K&N installs the same products on a later-model Ford F-350. Things are guaranteed to get interesting.
As for Steve Raney, the last time we spoke to him, the Chevy was better than new. He finally had the power he needed to transport the Deerskin trailer to the field and back, and he actually saw a small improvement in fuel mileage as well. You can’t ask for any news more satisfying than that. We just hope his dogs appreciate all the work, too!
Product Profile:
Hypertech
901/382-8888
www.hypertech.com