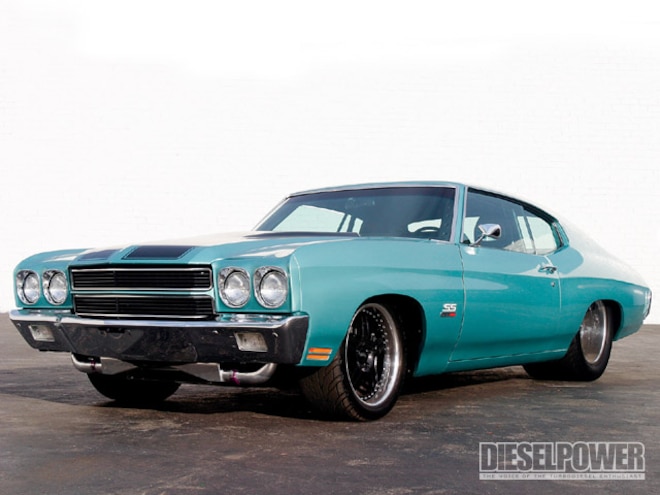 View Photo Gallery | 15 Photos
Photo 2/15   |   1970 Chevy Chevelle left Front Angle
Mike Racke has built the latest diesel-powered muscle car we have seen, and possibly also one of the nicest diesel re-powers we have ever encountered. Mike took great pains to make everything perfect on his new ride, from the factory-appearing Chevelle dash with boost and EGT gauges to the Corvette front suspension that can absorb any road hazards. Mike's resto-diesel hot rod is a 10 out of 10.
To understand why he took this path, we have to rewind back to late 2005 when Mike took a ride in Joe Komaromi's Duramax diesel-powered HUMMER H1. "I couldn't believe it," Mike says. "It was an 8,000-pound rig, and it felt like my 10-second drag car. It was then that I knew I had to put a Duramax diesel in a Chevelle." Since Mike restores Chevelles and other muscle cars for a living, he had no problem rescuing this '70 Chevelle from the scrap heap. 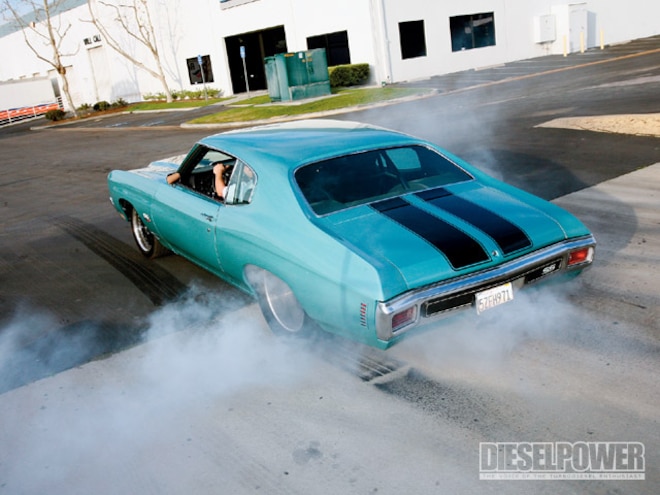 View Photo Gallery | 15 Photos
Photo 3/15   |   With more than 1,000 lb-ft on tap, the Chevelle has no problem spinning the rear tires on command.
Remember folks, this is back in early 2006, so there were no stand-alone wiring harnesses, or swap kits available for his project. Mike had to take the hard route, fabricating much of the Chevelle himself from scratch. To start off, Mike replaced the rusty quarter panels before sending the car off to Fast Eddie's Race Cars in Orange, California. There Eddie mounted the engine, fitted the Art Morrison chassis with a Corvette C5 front suspension and custom-built rearend and built some killer wheel tubs for the 33x22-inch rear tires. Once Mike got the Chevelle back from Eddie's, all that remained was the 10 zillion things left to do to turn it into a running vehicle.
Mike had many hurdles to tackle before the Chevelle was completed. The '05 LLY engine had an extra computer to wire in, and the dual CP3 provided by PPE needed a custom mount to clear the twin turbochargers. The engine was moved back 8 inches from the stock big-block location, so a custom dash had to be built. The wiring, cooling system, and turbochargers were all one-off pieces that required a lot of attention. All these problems and more were conquered by Mike working on the vehicle "about 5-6 hours every night after work for two years." Mike's Duramax-powered Chevelle project soon started to grab a few other people's attention.
"I brought a ported Duramax cylinder head to a car show and had people guessing what it was from." After about five minutes one of the guessers gave Mike a business card indicating he was Darryl Bassani from Bassani Exhaust. "Darryl doesn't really do custom stuff," Mike said. "But he thought I had such a creative project that he said he would make an exception." In this case, "custom stuff" meant a set of headers and downpipes for Mike's Duramax-powered turbo Chevelle.
Mike also enlisted the help of Guy Tripp, the owner of SoCal Diesel. With about a week of time into his own half-ported cylinder head, he turned it over to Guy, who used a CNC machine to port the cylinder heads faster than Mike ever could, while also upgrading them with new valves and springs. Although Mike wanted to have a show-grade machine, he also wanted it to be fast, so the performance parts didn't stop there. The engine was upgraded with Carrillo connecting rods, and the stock pistons were modified by SoCal Diesel.
With a stout long-block, Mike turned his attention toward supplying plenty of fuel and air. The stock turbocharger was ditched for twin Garrett GT-38R turbos set up in parallel, or one turbo per bank. The turbos feed into two Bell intercoolers and are driven by custom headers courtesy of Bassani. The intake manifold is also a one-off 16-runner piece that was TIG-welded by Fast Eddie's Race Cars. On the fuel side, a PPE Dual Fueler is mounted in front of the engine via a custom accessory drive that uses a big-block Chevy crank pulley. Tuning is provided by an off-the-shelf PPE programmer, which Mike keeps on the highest setting.
With this much power on tap, the drivetrain had to be up to the task, so the Allison transmission was fitted with a Stage 5 upgrade kit from PPE, along with a custom converter from ATS. The rearend was a custom-built Ford 9-inch by Fast Eddie's Race Cars, which houses a 3.25 gear ratio and a Detroit Locker.
During our photo shoot, Mike surprised us by how hard he drove his one-of-one creation. He didn't slow down for corners or potholes, and he floored it as much as he could on the way to our pre-arranged photo shoot location. Even though Mike's creation carries a six-figure price tag, he's built it as a genuine driver. In fact, as the weather clears up, Mike is planning on taking the Chevelle to the local dragstrip, where he'll be shooting for mid 9s in the quarter-mile.