Built To Dominate The Terrain On Any Continent View Photo Gallery | 15 Photos
Photo 2/15   |   Would you believe the gleaming Viper Red paint was a $700 job applied at a local auto body shop?
We all want our trucks to suit our every need. For most of us that means a machine we can drive every day, use to tow any trailer, punish unsuspecting sports cars with, and keep around for hundreds of thousands of miles. But that's just if you're a normal Diesel Power reader.
Kent Kroeker's Viper Red '03 Dodge Ram 2500 began life a lot like most diesel trucks do, but it's ended up the beast you see before you. Kent bought the Dodge new in Oregon so he could get the high-output 305hp Cummins common-rail engine when it debuted. He used the truck as his daily driver for years just like most of us would do, the only thing was--Kent's daily driving routine is radically different than most of ours. 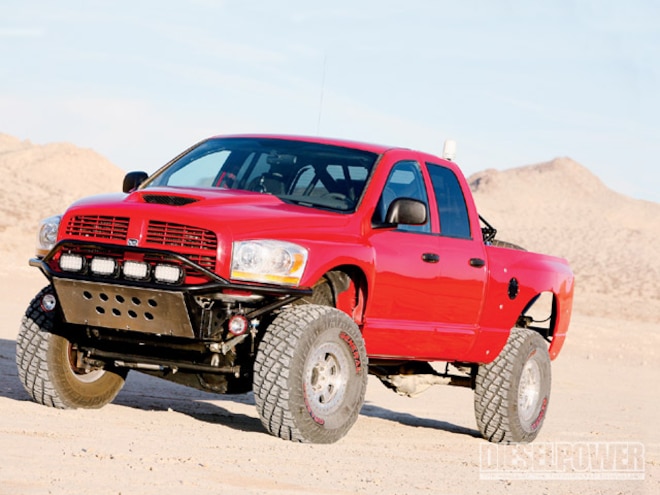 View Photo Gallery | 15 Photos
Photo 3/15   |   The four LED off-road lights paired with a set of Feugo HIDs from Baja Designs ensures the competition will see the truck coming day or night.
As owner of KORE Off-Road Engineering, he's one of the guys who pioneered using -ton diesel pickups as off-road race vehicles. In fact, Kent's Dodge was the first Cummins-powered vehicle to ever complete the famous Baja 1000 off-road race. Along the way, he and his team have developed the hardware needed to keep 8,000-pound diesel trucks alive at race speeds, in the middle of nowhere, and on roads that are more like obstacle courses and mine fields than the boulevards and avenues most of us drive on.
Over the past two years, Kent has converted this race truck for duty in the Dakar Rally, where it would go head-to-head with six-wheel-drive diesel trucks from Europe's biggest teams. That's not to say this once-black Dodge has given up its days on the street--far from it. The red Ram still cruises comfortably down the highway and even tows a fellow race truck from time to time. Keep an eye out for it at the next Best In the Desert off-road race, down in Baja, or whatever continent you may find yourself on. DP