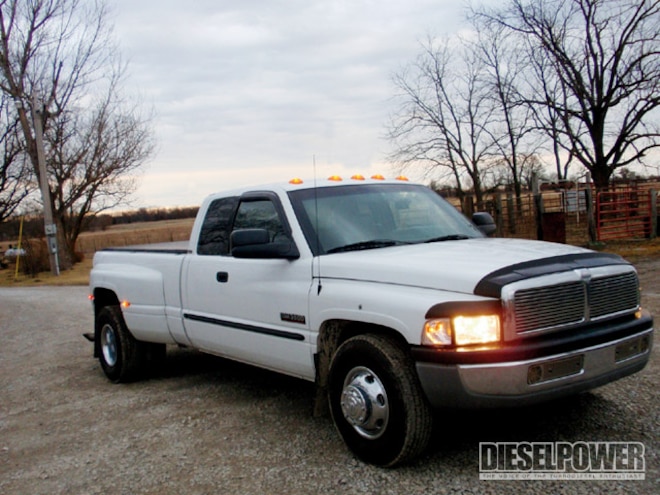 View Photo Gallery | 5 Photos
Photo 2/5   |   2001 Dodge Ram 3500 right Front Angle
The word "power" has many different meanings. The one that first comes to mind is strength, or force, which is measured in quarter-mile times, GVWR limits, and dyno results. Another component of power is the ability to act, and this is measured in long-term dependability like tonnage hauled and miles driven without a major breakdown. Diesel Power recently came across a textbook example of the latter definition.
The Truck and Owner Operator Team
This 1.4-million-mile truck is an '01 Dodge Ram 3500 purchased new in late 2000. It was ordered with two-wheel drive, an NV5600 six-speed manual transmission, and a 4.10 rear axle ratio in the Dana 80. The engine is a 24-valve 5.9L Cummins with a VP44 fuel injection pump. The rotary VP44 is a cross between older mechanical designs and newer electronic computer-controlled injection systems. A major piece to the million-mile puzzle is having the right driver. Howard Clayton of Waterloo, Iowa, is a 30-year veteran of John Deere Co. and drove Class 8 trucks before buying this pickup to haul camping trailers for Bennett Transport. Working together, truck and driver pulled more than 360 units from Indiana to western outlets across the United States. He stated that more than 65 percent of the truck's total miles were accumulated under heavy load, and while making him money. He has complete records of the maintenance and accurate logs of all the mileage.
The Maintenance
If you want million-mile longevity out of a diesel, you either want to work on it yourself, or find a shop that you trust-and use it exclusively. For example, Forrest Cunningham of Cunningham Performance LLC located in Hallsville, Missouri, was the only mechanic who worked on this Dodge. For a truck with 1.4 million miles, the repairs were relatively minor and included an injection pump, a clutch, several batteries, multiple belts and hoses, two sets of front wheel bearings, two-cylinder head gaskets, many lift pumps, two water pumps, one remanufactured vacuum pump, a power steering pump, a complete set of universal joints, a new belt tensioner, and a fan clutch. It's amazing how many of the parts went basically untouched, including the turbo, Dana 80 rear axle, and the transmission.