Could This Be The Most Powerful 6.0L In Arizona? 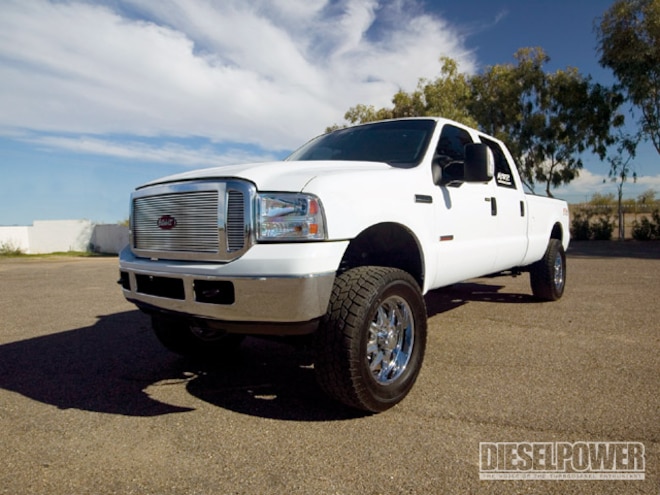 View Photo Gallery | 13 Photos
Photo 2/13   |   2006 Ford F350 Super Duty left Front Angle
Most guys are fiercely loyal to their chosen brand and favored engine, whether it be Cummins, Duramax, or International. Those same guys can't always tell you where their loyalty comes from though. Their fathers' preferences? Aesthetics? The first car they owned? Brody Smelter knows exactly where his fondness for his '07 F-250 comes from. Brody's last truck was a Chevy 2500 HD with a 6.0L gas engine and 13 inches of lift with 38-inch tires. "The engine made good power, but it got horrible mileage," Brody recalls. "And it ate up front-end components like they were candy."
Learn From Your Mistakes
Tired of throwing money at the Chevy, Brody traded one 6.0L engine for another, but displacement is all they have in common. The gas-powered General was discarded in favor of a brand-new '06 F-350 Super Duty. The truck was ordered with a 6.0L diesel engine, 5R110 automatic transmission, and four-wheel drive. "At the time, I didn't know about the head bolt issues with the 6.0L," Brody admits. "All I knew was that I didn't want another truck with independent front suspension."
The Dana 60 solid axle under the front of the F-350 has no problem withstanding the suspension lifts and big tires that Brody favors. The Super Duty was previously fitted with an 8-inch suspension lift and 37-inch tires, but Brody has since installed a more reasonable 4-inch Superlift suspension and Farmboy Fabrications traction bars to accommodate 35-inch Toyo Open Country A/Ts on 20x10-inch Incubus Alloy rims. Even with the factory 3.73 gears in the Dana 60 and rear Sterling 101/2-inch axle, there is still plenty of power to keep Brody smiling-and the fuel economy is double what he was getting from his last gas-powered truck. 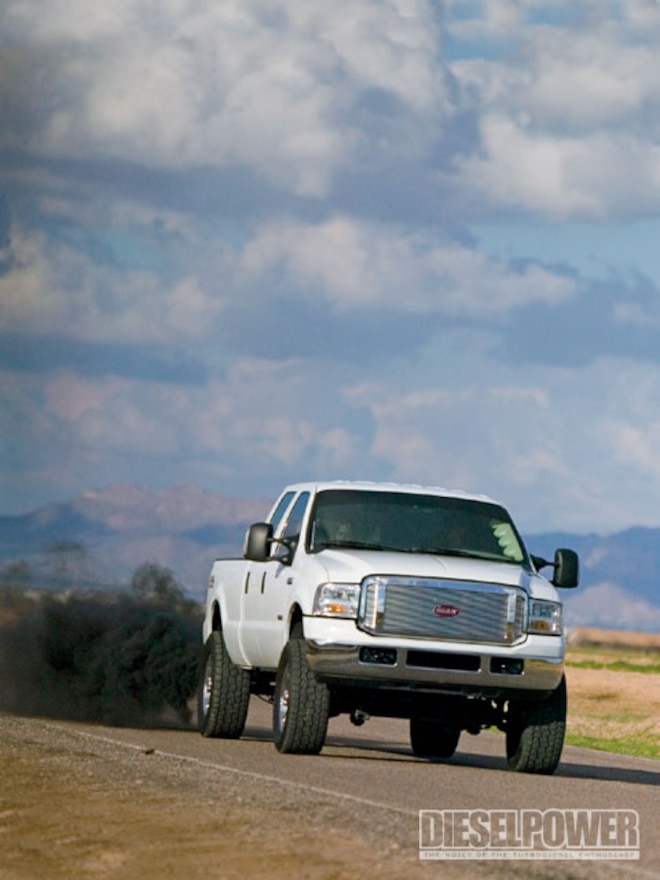 View Photo Gallery | 13 Photos
Photo 3/13   |   2006 Ford F350 Super Duty right Front Angle
Time To Tinker
"Plenty" of power is good enough for most people, but not Brody. He added the standard modifications, such as the AFE Stage II intake, MBRP 4-inch turbo-back exhaust, and SCT Livewire X3 with custom tunes from Eric Eldreth at Innovative Diesel in Elkton, Maryland. He didn't let the reputation of the 6.0L Power Stroke dissuade him. Brody dove in head first to address and upgrade the shortcomings of his diesel engine thanks to the guidance of Shawn Brown at Ragin' Diesel in Glendale, Arizona. To keep the heads from lifting off the block due to increased cylinder pressures, H-11 head studs and a Liberator EGR delete kit from ITP Diesel were added. A coolant filter kit from Ragin' Diesel was also mounted under the hood to keep the coolant free from debris.
These modifications allowed Brody to dump copious amounts of air and fuel into his engine without reservation. The intake side of the equation comes from a Nitrous Express two-stage nitrous kit with a progressive controller and an Industrial Injection 62/80 Phat Shaft turbocharger that pushes air through a Banks Technicooler intercooler. Brody contacted Dennis Schroeder at ITP Diesel in Glendale, Arizona, to build the fuel system that keeps up with the air upgrades. Diesel is filtered with an Air Dog system and delivered by a Fuel Lab pump through 5/8-inch fuel lines to 225cc Industrial Injection injectors. Any unused fuel is routed back to the tank with an ITP regulated return system. The combination has made 515 hp and 914 lb-ft of torque on a Dynojet dyno-without the aid of the nitrous oxide.

View Photo Gallery | 13 Photos
Photo 7/13   |   2006 Ford F350 Super Duty right Side Angle
Bragging Rights
Modifications were not limited to the engine. The stock transmission has held up admirably to the big power, allowing Brody to spend some of his hard-earned money on appearance items. In addition to the Superlift suspension and 20-inch wheels, Brody added an RDX billet grille with a Peterbilt emblem. Inside, the leather interior is complemented by an LED dome light and an A-pillar gauge pod that monitors the Super Duty's vital signs. DiPricol Optix black-face gauges monitor exhaust gas temperature, boost pressure, fuel pressure, and transmission temperature.
The combination has proven itself at the track, running a best of 13.06 seconds at 102 mph on fuel only. It's the engine though, that Brody is most proud of. "I figure it's the most powerful 6.0L in Arizona," he boasts with a smile. That smile suggests that Brody won't be buying anything but Fords for a long time to come.