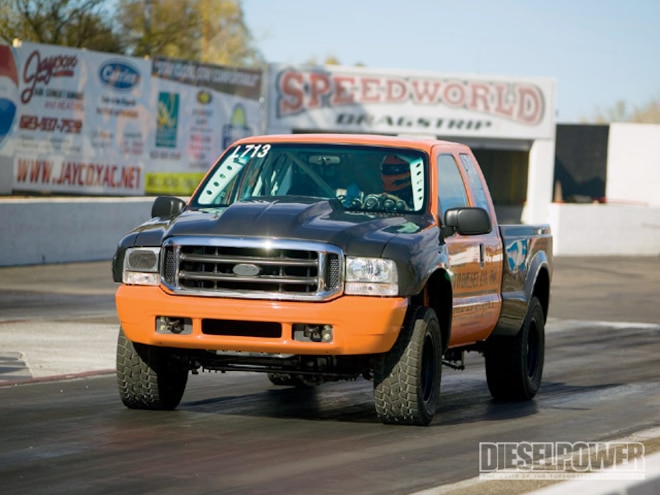 View Photo Gallery | 15 Photos
Photo 2/15   |   1999 Ford Super Duty left Front Angle
Chaz Lightner is a die-hard Ford guy. If his '67 Shelby Mustang isn't a dead giveaway, the Bronco tattoo permanently inked on his skin should be. Lightner is a complicated man though. In addition to being a Ford fanatic, he also has a fondness for Cummins engines. If the name Chaz Lightner sounds familiar, it might be because we featured his orange '66 Bronco stuffed with a 4BT Cummins in "Black Smoke Bronco" (Sept. '07). Now Lightner is back with another Cummins-powered Ford creation--which is even wilder than his last.
Lightner's latest Ford is a '99 Super Duty 4x4 SuperCab shortbed truck that was a theft recovery. The thieves took the truck for a joyride and punched a hole in the fuel tank in the process. When the truck died (due to fuel starvation) the thieves ditched it, allowing the truck to be recovered. The 7.3L Power Stroke would not run due to the lack of fuel, but the wrecking yard misdiagnosed the problem as a bad engine. This allowed Lightner to virtually steal the truck for himself, and a new project was born. Once some clean fuel was supplied to the engine, the 7.3L ran fine, but Lightner had other plans in mind for his new purchase. The stock drivetrain was pulled and sold to finance the build he was formulating in his mind. Then the interior was completely stripped and the fenders and hood were removed and sold. With the truck stripped down to the rolling chassis, and Lightner now with money in his pocket from the parts he sold, he began turning his dream into diesel reality. If you think Lightner is lucky now, keep reading. 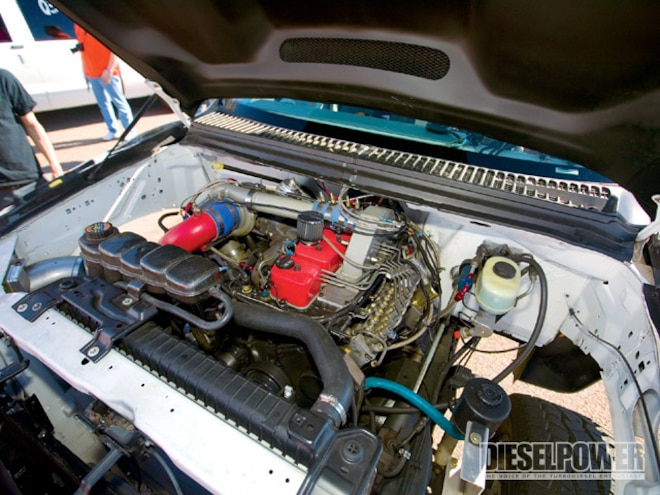 View Photo Gallery | 15 Photos
Photo 3/15   |   The 12-valve Cummins engine, built by Beck Racing Engines, came out of a truck that was a victim of a fire. It fits nicely in the Super Duty's engine bay on Destroked.com motor mounts.
Heart Transplant
The heart of the build is a 5.9L Cummins 12-valve from Beck Racing Engines. "I've known Frank Beck for about twenty years now," Lightner casually mentioned, "and he really helped me out with this engine." Beck Racing engines bored and sleeved the block and balanced the Mahle 16:1 compression pistons and the stock rods and crank to within one tenth of a gram to allow Lightner to reliably spin the engine to 4,800 rpm. To breathe at that engine speed the head was ported, O-ringed, and fitted with stiffer valve springs by Ken Diaz at Turbo Auto Diesel. A set of ARP head studs was used to keep the head securely affixed to the block, even under triple-digit boost pressures.
Boost comes from combined B1 and B2 turbos from Turbo Auto Diesel. Since the truck was built to compete on the dragstrip, the intercooler was deleted in an effort to reduce weight and make the intake plumbing as short as possible for quick spooling. To keep the exhaust gas temperatures reasonable, a Snow Performance system injects water-methanol through three 625-milliliter-per-minute jets. Three stages of nitrous oxide from NOS are also injected into the engine. The first stage spools the turbos with a 0.040-inch jet, and the second and third stages provide additional oxygen to the engine and cool the intake charge. The second stage uses an 0.125-inch jet and comes on when the throttle position sensor indicates Lightner's foot is on the floor. The third stage uses a 0.090-inch jet that is engaged by a timer three seconds into the quarter-mile run.
All of that oxygen from the turbos and nitrous is necessary to keep up with the healthy fueling system. A custom-fabricated six-gallon fuel cell provides diesel to a FASS 150 lift pump. The clean fuel is then delivered to a Bosch P7100 injection pump built by Turbo Auto Diesel with 14mm plungers. The high-pressure fuel is delivered to the cylinders via Turbo Auto Diesel electrical discharge machined (EDM'd) fuel injectors.
Unlucky Drivetrain
The unfortunate drivetrain that is forced to live behind the high-horsepower Cummins is largely stock, which is a testament to Ford's strength and durability. A Cummins-to-Ford conversion flexplate and bellhousing from Destroked.com were used to mate the B-series engine to a John Wood-built 4R100 transmission. The transmission uses a billet torque converter and full billet internals and is controlled by a stand-alone PCS computer and D200 data logger.
From there, power is routed through the stock NP273 chain-driven transfer case, which is used at the strip to transfer power to all four wheels. The front Dana 50 axle was left relatively stock and retains the factory 3.73 gear ratio. The rear full-floating Ford 10-inch axle benefits from a Detroit Locker for added traction to the 325/60R18 Toyo Open Country A/Ts mounted on 18x10 American Racing Mojave rims.
Drag Details
While it is relatively easy to build a high-horsepower Cummins engine these days, Lightner's Super Duty has many extra details that underscore his drag racing experience. The rear driveshaft is fitted with a safety hoop to keep the driveshaft from pole-vaulting the truck if it should happen to come off on the strip. All of the plumbing is done with braided steel line and AN fittings, and the batteries and other components are easily accessible in the bed of the truck. The stock bed is fitted with bulged fiberglass bedsides that complement the matching front fenders and cowl induction hood. Normally, you would see white fiberglass fenders on an off-road race truck, but Lightner took a cue from the desert-race world to shed a few pounds from the truck and keep the tires covered on the dragstrip. Instead of being standard white, the fiberglass was hydroprinted by Real Image of Phoenix to look like carbon fiber.
Inside the truck, the drag racing theme continues. B&A Motorsports fabricated the rollcage from 4130 chromoly and dropped the cage through the floor in order to completely TIG-weld it before attaching it to the cab and the frame. The cage was then topped with Mastercraft seats and five-point harnesses from Driven Auto Parts for added safety. With the stock dash gone, Lightner used an assortment of Auto Meter gauges to monitor everything from boost pressure to voltage. He also used an old racing trick and rotated the gauges so that the highest acceptable value occurs when all the gauge needles are pointing straight up. This makes it easy to determine if there are any problems by just quickly glancing at the gauges.
What's Next?
When we met up with Lightner at the track he was still testing the truck out. His previous trip to Speedworld Raceway outside of Phoenix resulted in a split intake manifold that could not withstand the triple-digit boost pressures. Lightner ran high 12s on fuel only and a stock P-pump, so there is plenty of power left on the table. The rollcage, driveshaft hoop, and other safety features leave Lightner with room to go faster in the future without breaking any track rules. Making his newest creation quicker at the dragstrip should keep him from thinking about painting that Shelby Mustang orange, and shoehorning a Cummins engine under the hood--at least for the time being.