So Clean You Could Eat Off It 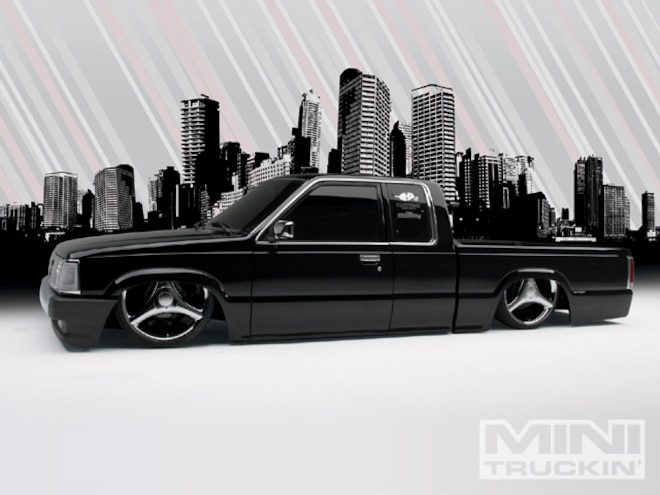 View Photo Gallery | 12 Photos
Photo 2/12   |   OWNER: Jeremy RiceRIDE: 1987 Mazda B2000LOCATION: Glendale, AZCLUB: Art of Noize
It's becoming more and more popular among the veteran minitruckers to build a simple and clean minitruck that is still 'bagged and body-dropped, to drive as a daily.
The only problem is that many of the veteran minitruckers are armed with knowledge that generally works against them in this seemingly simple task. Once the buildup begins there's always something else that you want to "clean up while you're there" and armed with the know-how to do it yourself, you tend to jump in head first and before you know it you end up like the story behind Jeremy Rice and his immaculate 1987 Mazda B2000. You see, he too just wanted a simple daily driver and since he has the skills to tackle the task himself, he also wanted to build a truck for his friend's hydraulic company, Hydroholics.net. It's no secret that the Art of Noize Arizona guys are known for some of the cleanest hydraulic setups around, and it was only a matter of time before they started to share their secrets with the rest of the minitruck community.
Jeremy quickly put in work and tore the B2000 down to the frame, by himself, including the cab and bed using only an engine hoist. While we don't recommend doing this, it's quite a feat and we must begin by congratulating Jeremy for not killing himself in the process, haha. The other tricky part of this buildup was the strict timeline. The Mazda was set for debut at the Forbidden Fantasy show, which gave Jeremy and friends a mere six months to build a truck from head to toe. So the parts begin to fly, as Jeremy tackled the fabrication duties to lay the frame to the ground first, using his buddies over at Hydroholics.net. When the `dro setup was complete and he was happy with the suspension, Jeremy once again got to cutting and body-dropped the Mazda 21/2 inches. To add a little "new old-school" flair, Jeremy bolted up a set of 20x7.5 Incubus Lures; that's right folks, 20-inch three-spokes rolling hard. Taking a step back and admiring his own handy work, Jeremy was finally happy with the stance and look of his truck. But they weren't done yet. With only a couple months left, it was time to call in the rest of his buds to help round out the paint and interior duties. 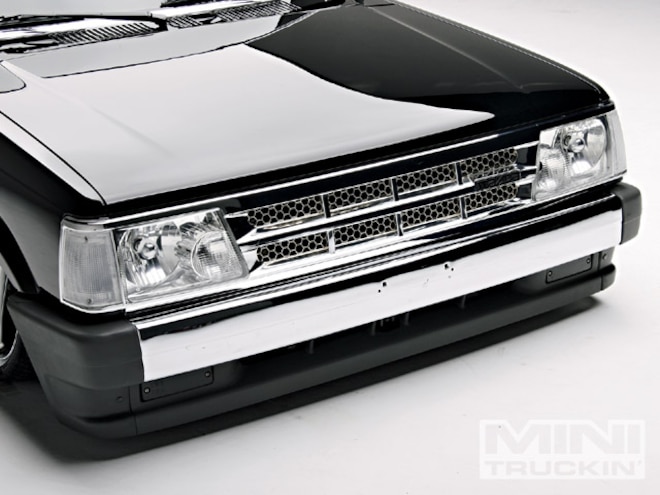 View Photo Gallery | 12 Photos
Photo 3/12   |   1987 Mazda B2000 chrome Bumper And Grille
There's only one good color in the Art of Noize paint code book, and that color is black. Black, chrome, and hydros is an unstoppable combo when these guys bring it to the table. So while Terry AKA "T-Money" got down on the paint and body, Jeremy and his buddies Andy and Scottie Taylor, took care of the cabin duties. As the clock ticked away, the weeks slowly became days, and a few all nighters later it was time to pack the freshly bodied, painted, and built B2000 up for the road trip to SoCal for the FFF show.
In six month's time they ran into a few snags, which cost them a couple months downtime, so technically in only four months, Jeremy and a few close friends accomplished what many of us try to accomplish for years. Jeremy built a super-clean truck that can not only be driven to any show near and far, but it also represents a successful business product that will soon bring a close to the fear of using hydraulics in the minitruck world. Jeremy and his buddies at Hydroholics.net will be touring the show season showing off their products and installs on this truck and other rides. For more info on this immaculate Dawg and any of the buildup details, check out the Lowdown.

View Photo Gallery | 12 Photos
Photo 9/12   |   1987 Mazda B2000 engine
Engine/Performance
Intake: Weber 32/36 carb
Header/exhaust: Pacesetter header Magnaflow exhaust
Driveshaft: Modified for the Toyota rearend
Rearend type: Toyota
Battery: Kinetik 1800
Detail work: Chromed and painted
Special Thanks by OwnerI want to thank Terry for getting the truck as straight as it is, then getting the black paint down so nicely on the truck. Also Andy and Mike for playing a big part in getting some of that body work done. Then Andy again for all his help with the interior. He really came through big when I needed it. A big thanks to Aaron and Derek with Hydroholics. Derek did all the hard-line in the truck and it is hard-lined from front to back. Also thanks to Erik from Kinetik for some great batteries. Thanks to Scott for setting me up with Scosche and Realm audio. Without all these guys the truck would not be what it is. Thanks to my club Art of Noize and everyone that helped out.