The Road To A New Frontier 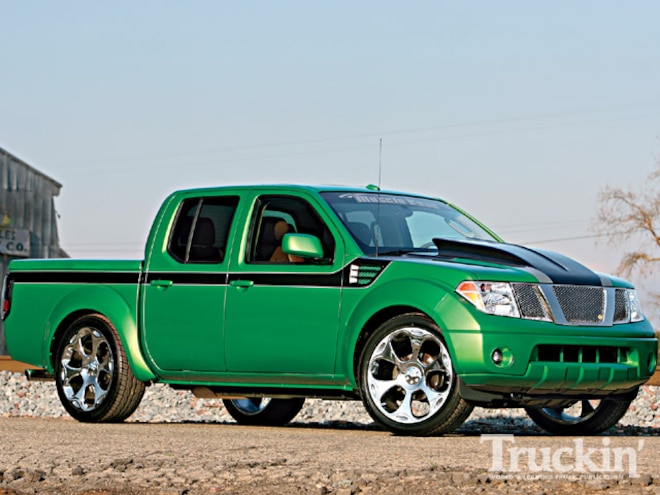 View Photo Gallery | 9 Photos
Photo 2/9   |   nissan Frontier right Side Angle
One thing is for certain when creating a show truck like Dennis Patterson's Nissan Frontier, and that is to go into the build ready and willing to customize everything. Dennis' creation was assembled for the sole purpose of appearing in Nissan Motors' '08 SEMA stable, but before the truck made it to the city of sin, its builders scrambled to locate and create the necessary parts. Dennis happens to be the owner of Muscle Road, a one-stop auto-overhauling shop in Madera, California, so the chips happened to be stacked in his favor. With that said, it's still difficult to build a late-model import truck without a supportive aftermarket.
Not one to buckle under pressure, Dennis started the project by dropping the Frontier 2 inches, but without any assistance from off-the-shelf components. McGaughy's lent a hand by creating a spec-specific pair of drop coils that would help lower the Nissan's frontend. Moving to the rear, Dennis and crew were looking at the set of stock leaf springs but had no readily available way to lower the back. Once a plan of action was made, the leaf packs were yanked and a few leaves from each side were removed and the packs themselves were then flipped under the axle. With the mild drop complete, a foursome of 22x10-inch KMC Zero wheels and 285/40R22 Toyo Proxes ST-II tires were mated and bolted onto each of the four hubs. 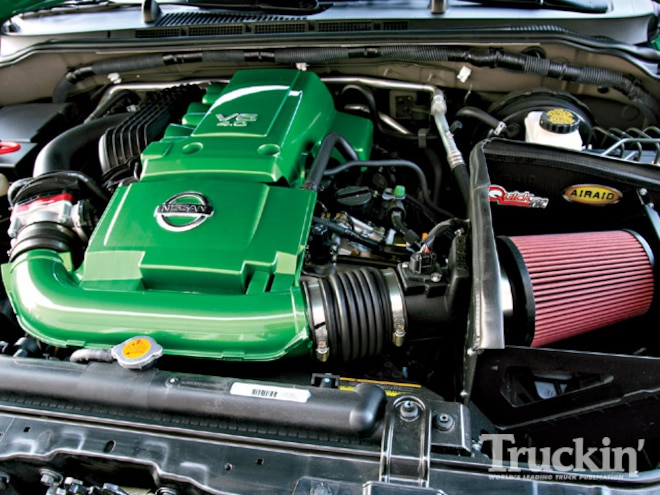 View Photo Gallery | 9 Photos
Photo 3/9   |   nissan Frontier v6 Engine
Dennis wanted to roast the new wheel and tire combo as much as possible, so he enhanced the Frontier's 4.0L V-6 with an Airaid intake along with a throttle-body spacer and JBA headers complete with an JBA exhaust system. The additional performance modifications gave the Frontier an additional 25 hp and 20 lb-ft of torque -- Dennis couldn't complain about those figures.
With the Nissan sitting lower and breathing better, the next step of Muscle Road's SEMA project placed the truck's body and paint into focus. In Pro Car Wear's third brake and LED taillights shine bright behind the Frontier and a SnugTop fiberglass tonneau covers up the bed in style. Dennis shaved the door cladding and attached a Street Scene roll pan, grille, and fender vents onto the Frontier's all-around profile. The stock hood received an aggressive-looking cowl, which was handcrafted by Dennis himself. Once every inch of the Nissan's skin was smooth enough to paint, Dennis selected and sprayed DuPont Hot Hues Midori Sour green paint atop the Frontier's surface.
While there is plenty of green on the Nissan's exterior, there is a helping of it inside the cab as well. A few dash, center console, and door trim pieces were pulled and painted and the front and rear seats were covered in Roadwire's King Ranch brown leather. For better sounds, a Clarion receiver controls the two RF amplifiers that power two 10-inch Rockford Fosgate subs in a suede-wrapped sub box on the back seat. Seven-inch headrest monitors have been implanted to the back of the driver and passenger seats in order to provide entertainment for the rear passengers who already find themselves traveling in luxury.
Whether being inside the cab or out, Dennis is completely satisfied with the outcome of Muscle Road's in-house SEMA build. The Frontier materialized relatively quickly and came out even better than they had anticipated. The results just go to show that any late-model truck can be molded into a showpiece--even without drop-in-cart parts.