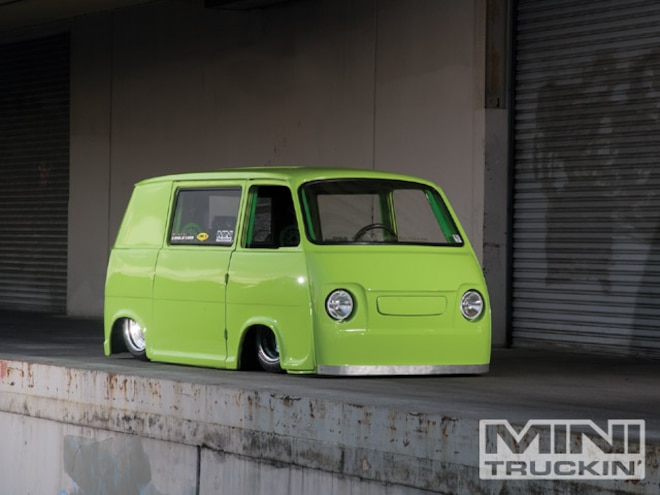 View Photo Gallery | 10 Photos
Photo 2/10   |   OWNER: Edgar and Evelyn HernandezRIDE: 1969 Subaru 360VanHOMETOWN: Fallbrook, CACLUB: Negative Camber
What do you do after you've already built your dream truck and made it onto the cover of Truckin' magazine?
Well, if you're anything like our friend Edgar Hernandez from Fallbrook, CA, then you would have to really think outside the box and come up with something unique. Edgar did just that--he wanted to build something totally different that no one else has ever built before.
After getting rid of his previous truck (cover of Truckin' issue #7 of 2006), Edgar was on the hunt for something truly one-of-a-kind. He ran into Ruben at Audio Evolution in Temecula, CA, who had exactly what Edgar was looking for. They worked out a deal and Ruben ended up being a huge part in the buildup of Edgar's new 1969 Subaru 360van. These little micro machines were only imported to the US in 1969 and 1970 with about 2,200 making it to the States. As of today, there aren't very many in working order, so Edgar knew this would be the key to building something truly unique.
Edgar left it in the capable hands of the pros over at Audio Evolution to completely rebuild and restore the interior. They had to make it center-drive (where only one seat sits in the front with the steering wheel and controls all centered) in order to make it fully functional for Edgar to drive but also to have air ride and still sit flat on the ground. As there are very few of these gems still around, and even fewer parts available, everything was built from scratch to suit the custom likes of Edgar and his wife Evelyn. For the chassis duties Edgar had Toy Prep build a custom full tube chassis with A-arm suspension front and rear to utilize center-mounted airbags. The chassis work on this Subaru van is just as custom as the rest of the one-off work inside and out.
With the chassis work dialed and the interior details still being worked out, Edgar wasted no time and went to the paint guru, Doug Starbuck from Star Side Designs, to help him get the body in smooth, working order. With everything shaved clean they decided on a PPG Parrot Green to really make the bus stand out from the all the rest. Edgar has been around the custom block before and wanted to make sure things were done right the first time around, so he enlisted pros at all the important stages of his build to help a smooth and on-time completion.
The next step was to dial-in a VW motor and get everything wrapped up. Edgar enlisted the help of Tom at Tom's Foreign Auto House to build a VW motor and get everything working together properly. Edgar mentioned to us that one of the craziest things of this one-year build was the fact that almost the entire build took place on workbenches. Everything is so small, including the motor and frame, that the entire thing could be built on a bench. We all know minitruckers are big dudes that like little trucks, and this little Micro Machine is no exception. After Tom was finished working his magic with the motor all that was needed were final touches and the complete reassembly.
In a little over a year Edgar managed to accomplish yet another goal and build a one-of-a-kind custom vehicle that will be remembered for years to come. Edgar ensures us that "nothing is ever done" so he has more tricks up his sleeve. Whether it's for this ride, or his next project, we're sure it will come out just as clean as his first two feature worthy builds. For more information and specs, check out The Lowdown.

View Photo Gallery | 10 Photos
Photo 7/10   |   1969 Subaru 360van engine Bay
Engine/Performance
Engine: 1915 VW motor
Header/exhaust: Flowmaster Streetflo and custom piping
Transmission: Type one
Rearend Type: Custom axles
Performed by: Tom's Foreign Auto House
Special Thanks From Owner
"I would like to thank my wife and daughter for their support. Also Ruben from Audio Evolution who I purchased the bus from and also all of his help with the audio and interior it could not have come together so nice without him and Carlos as well. Also, Viair and EFX Scosche for the sponsorships. Shawn from Fallbrook tire for helping with the wheels and tires. Doug from Star Side designs (the original Starbucks) for an awesome and fast job. Frank's Upholstery for wrapping the interior. Tom at Tom's Foreign Auto House the VW expert. Auto Glass Pros for the glass work, and a special thanks to all my brothers from NC World's Lowest."