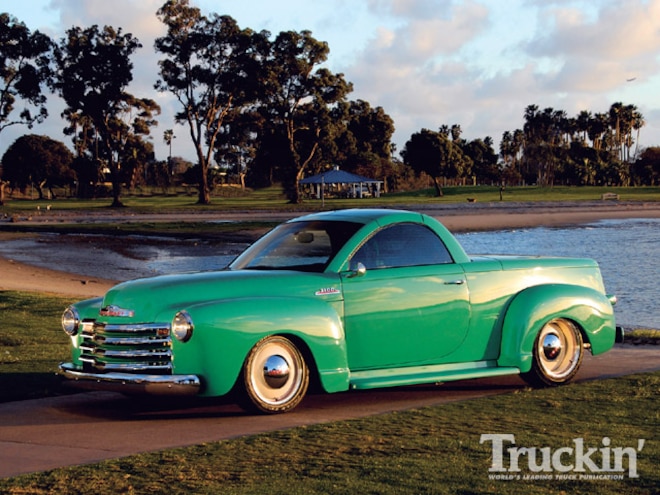 View Photo Gallery | 11 Photos
Photo 2/11   |   chevrolet Ssr left Side Angle
When Chevrolet released its new SSR in 2003, it appeared to be a throwback to the early-model GM pickups from the '48-'54 era. Instead of the original rounded fenders, hood, and cab, the new CAD-designed body reflected a more rigid appearance. To most folks, the SSR was a cool nostalgia cruiser with today's style and performance.
Brian Stafford from San Diego, California, attended the `07 Goodguys Show at Del Mar, California. He saw an '02 Corvette frame that was retrofitted with a longer, wider, modified 1962 Corvette body. Brian had been a '62 Corvette owner and couldn't help but notice that the extra-large imitation '62 Vette, which was kind of cool, was too oversized. He felt like you get today's engine and handling performance with yesterday's Corvette nostalgic appearance. After the show he was cruising home in one of his two SSRs when he thought it would be cool to build an SSR the way Chevrolet should have built them.
Brian liked Chevrolet's attempt at producing a retro '48-'54 pickup with the SSR, but thought that the designer engineers didn't quite nail it. The SSR body lines were too "chiseled". The SSR didn't have that rounded fat-fendered look. He decided to create his own version of the retro SSR. Brian approached Randy Clark, Sean Dell, and Scott King at Hot Rods & Custom Stuff in Escondido, California. Over the years they have built some of the baddest street rods, hot rods, muscle cars and trucks on the SoCal roads since opening the shop doors in 1989. The crew at HRCS transformed Brian's SSR into a more authentic throwback '48-`54 version.
An Air Ride Technologies pneumatic suspension with a self-leveling kit was installed to achieve a flexible limbo suspension. The factory disc brakes delivered ample stopping power. A set of smoothie-style aluminum wheels from Wheel Vintique measuring 17x7 inches in the front and 18x9 1/2 inches in the rear were installed complete with '53 chromed smooth Chevrolet hubcaps. The SSR's grip was achieved from four Goodyear Eagle F1 tires.
The original '03 Vortec 5.3L 300hp powerplant was replaced with an '07 Corvette LS2 engine that was disassembled, machined, bored and stroked to 427ci specs. A pair of AFR 225cc aluminum cylinder heads received Comp Cams intake/exhaust valves, springs and keepers. ARP fasteners secured everything. The engine's internal components are the best you can buy: a set of Callies connecting rods pinned to a set of Wiseco pistons/rings and a Comp Cams Magnum 285 camshaft provding a pronounced lope. The stock exhaust manifolds flow into a pair of Flowmaster dual-chamber mufflers. After the new 427ci was assembled, it was bolted onto the dyno and properly broken-in then fine-tuned on the computer by Joe Delano. A 4L65E overdrive automatic transmission received a shift kit to deliver firm shift points. The rearend was left stock.
The exterior modifications were the major contributions to the overall change of the SSR. The '03 SSR factory galvanized steel body components: front fenders, hood, bed, rear fenders, and tailgate, were all replaced. Sean used `53 Chevrolet pickup OEM steel replacement parts including hood, front and rear fenders, running boards, headlights, taillights, grille, tailgate, bumpers, and door handles for this project. The hood was cut and sectioned, then hinged using the factory SSR hinges. To achieve tight fitment of the front and rear fenders they needed to be trimmed. The SSR original cab was left intact, with no modifications. A custom wooden white oak, Mar-K bed floor was laid and separated by stainless steel stringers and secured with stainless carriage bolts. After all of the body mods were completed by the crew at Hot Rods & Custom Stuff, they laid down a couple of coats of PPG K36 primer. Next, they block-sanded the new retro skin to a flawless complexion. The SSR was then wiped down with a tack rag and given two passes with PPG Ocean Green basecoat then buried with four coats of clear to achieve its depth and glistening finish. Why was the choice of color Ocean Green? Because it was a '53 Chevy pickup factory color. The SSR's comfortable factory interior and concert hall audio were left stock.
Thanks to the visionary minds and fabricating skills of the crew at Hot Rods & Custom Stuff, Brian's SSR was transformed into a true realistic retro rod. It's too bad Chevrolet didn't have this same vision. For an up-close and personal video featurette and behind-the-scenes clips of this awesome retro ride, check out truckinweb.com