Big Audio In A Big Package 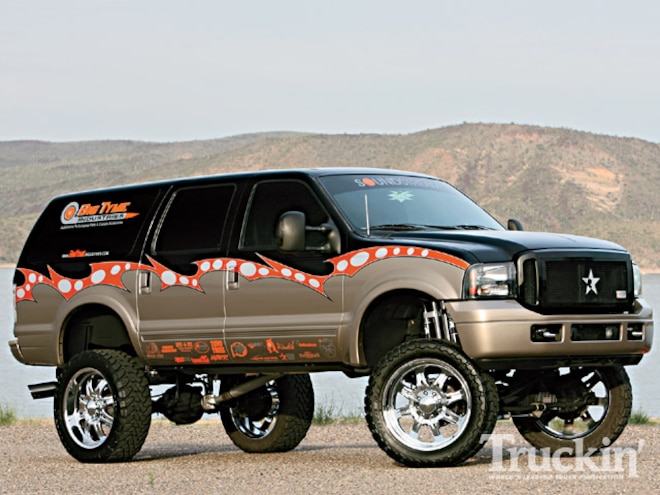 View Photo Gallery | 10 Photos
Photo 2/10   |   ford Excursion right Side Angle
We often describe vehicles built by custom shops as a rolling business card, showing off their talents and giving potential customers an idea of what to expect when their own project is completed. That description would fit this Excursion as well, but since it is an Excursion, Don and Erin Brooks' towering creation is more like a rolling billboard for their business, Big Tyme Industries in Mesa, Arizona.
The Excursion was lifted skyward with a Donahoe Racing 10-inch leaf spring kit that was installed along with double shock hoops to carry the Fox Racing 2.0 remote-reservoir shocks. Both front and rear differentials received 4.11 gears and Mag-Hytec covers before they were attached to the drivetrain with custom driveshafts built by Dan's Driveline. Don didn't want any ordinary wheels for his Excursion, so he chose a set of 24-inch forged Weld Racing Cheyenne wheels that would stand up to the punishment the heavy-duty Ford would be dishing out. The Weld wheels were shod in 37x13.50R24 Toyo Open Country M/T tires for plenty of off-road grip and mild street manners. View Photo Gallery | 10 Photos
Photo 3/10   |   ford Excursion left Side Angle
A 6.0L Power Stroke diesel churns the tires via a Monster Transmission-built TorqueShift five-speed automatic with a custom torque converter. The transmission upgrade was necessary because Don's Power Stroke runs a Bully Dog Performance Management Tool and an MBRP turbo-back 4-inch exhaust system that lets the Garrett turbo spool up tremendous amounts of power and torque. How much power? So far the total output has been clocked at 468 hp and 937 lb-ft. That's nearly double the output of a stock 6.0L Power Stroke.
While the whine of a free-spooling turbo coming from a straight exhaust will draw plenty of stares, Don wanted to be able to hold those eyes on his Excursion even when the truck was parked. For the bodywork, he called upon Super Stripes in Henderson, Nevada, to lay down some House of Kolor black, pewter, silver, and tangerine with a custom mix of pearl on top. The color was sprayed after the truck emblems were shaved and before Don installed Harley Davidson headlights and an RBP grille. 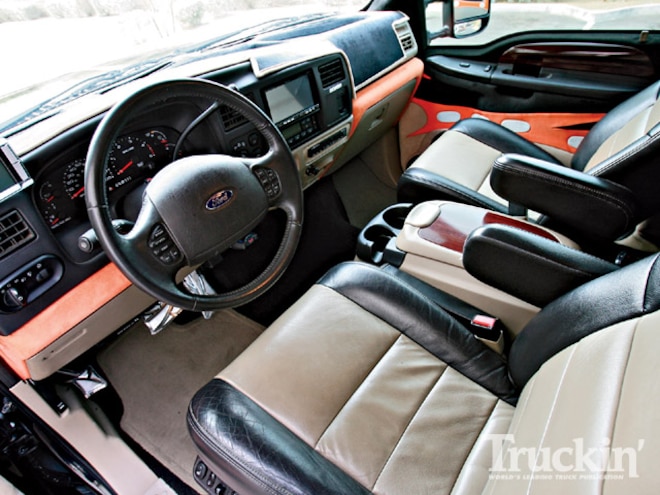 View Photo Gallery | 10 Photos
Photo 4/10   |   ford Excursion interior
Don chose the same colors for the inside that Super Stripes used on the outside, as Fat Boy Customs in Las Vegas, Nevada, used black leather and orange and silver suede to wrap the factory seats and interior. Leather and suede also found its way onto the custom sub enclosure that Don built to house a barrage of Soundstream audio components. For some chest-thumping bass, four Soundstream Tarantula TSQ-124 12-inch square subs point out of the rear hatch and are powered by two Soundstream Tarantula 1000D 1-channel, 1,000-watt amps. Mounted behind the subs, some 300 LED lights turn the subs into glowing afterburners once the sun goes down. To guarantee that the mids and highs come through crystal-clear, twelve Soundstream XT653S 61/2-inch three-way speakers are mounted in the Excursion's doors and are powered by two Tarantula 4.420 four-channel 420-watt amps. Don controls the audio signals through a Soundstream VIR-7355NRBT 7-inch touch-screen head unit and a BX4-EQ equalizer. All of that audio would be no match for a factory charging system and battery, so Don mounted four Kinetik power cells, two under the hood, and two in the sub enclosure, to serve as the reservoir for the power kicked out by the Soundstream 260-watt alternator mounted to the Power Stroke.
Don's truck has served him well as a rolling billboard, and he's got several sponsors to thank, including Soundstream, Kinetik, Fat Mat, KnuKoncepts, Toyo Tires, Bully Dog, MBRP. Amsoil, RBP, Monster Transmission, Truck Werks, Brite -n-Rite, and Prattster Graphics.