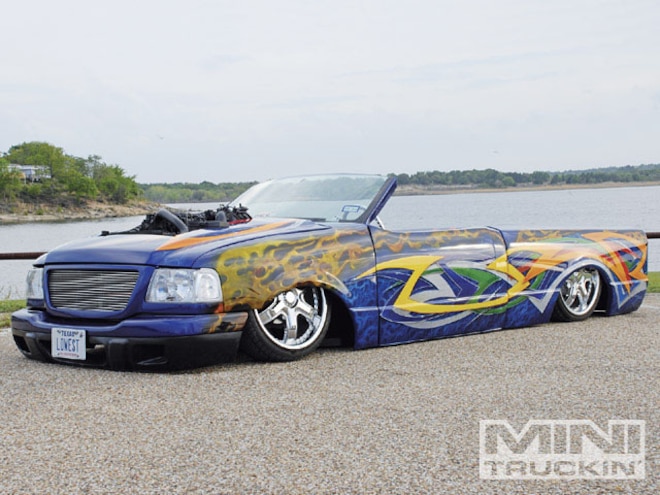 View Photo Gallery | 13 Photos
Photo 2/13   |   OWNER: Mark ZarateRIDE: 2000 Ford RangerHOMETOWN: San Antonio, TXCLUB: Severed Ties
When you're from Texas you tend to do things a little different thAn the rest of the country. You even like your music "chopped and screwed" which refers to the slowed-down tempo of southern coast hip-hop.
Down in the south it takes quite a bit to earn respect, and it's pretty much a given that if you want to make it to the top in ANY scene, you will have to go all out. That's just what Mark Zarate had in mind when he drove his 2000 Ford Ranger off the show-room floor with only three miles on the odometer. He didn't know exactly what he was getting himself into at the time, but he knew he was ready for the challenge. Sometimes a new project not only teaches you new things about your truck, but also teaches you a few new things about yourself. When Mark decided to completely transform his Ranger into what you see here today, the experience not only gave him a lifetime of knowledge about building a custom truck, but he also gained a wealth of knowledge about himself and his friends. 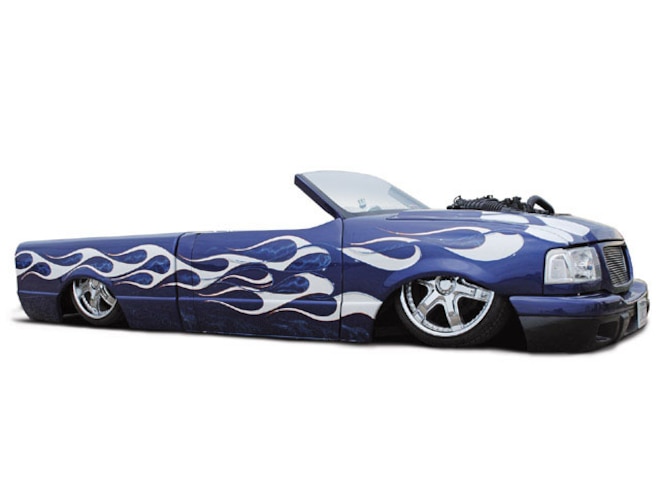 View Photo Gallery | 13 Photos
Photo 3/13   |   2000 Ford Ranger right Side View
With very little experience, Mark and a few friends took on the job of 'bagging, body-dropping, and chopping this Ranger on their own. Keep in mind this wasn't just channeling the body, this was a complete firewall-back 2x3-inch custom frame followed by a huge bodydrop and some very major body mods. And if that wasn't enough for this novice crew, Mark wasn't impressed with the original rockered bodydrop and decided to change it. He explains, "I cut the rockers off because the truck just wasn't low enough for me." And if cutting the rockers off couldn't impress Mark, then permanently removing the roof and suiciding the doors would have to do the trick. Cutting the roof off was purely something to be different, according to Mark, and it's not hard to understand his reasoning. How many driven trucks do you typically see that are permanently convertible and in Texas, nonetheless? 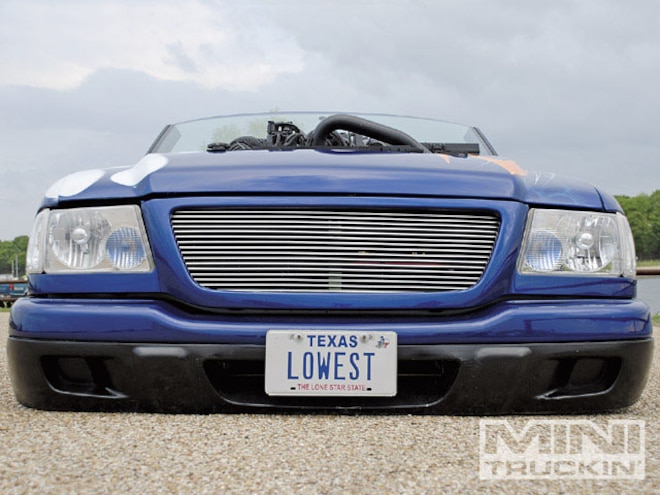 View Photo Gallery | 13 Photos
Photo 4/13   |   2000 Ford Ranger grille
While the missing roof and extra-low stance are the first things you notice about this Ranger, try not to forget that the entire truck is custom from the frame and body to the water- resistant vinyl seats and all fiberglass interior. When you're topless having a water-resistant interior is always a good idea when Mother Nature decides to dump some weather your way. Many people remember Mark from Texas Showdown 2007 as he continued to cruise the show in the pouring rain. Who says full-time convertible isn't practical? Not this guy.
Now that it's all said and done, those long nights that Mark spent in his garage thinking that his truck would never go anywhere or be finished are long gone. He believes that even though times got a little rough, being able to drive a kick-ass truck anytime he wants was sufficient payment and worth working hard for. In the end, Mark not only learned a few tricks about 'bagging and body-dropping trucks, he also gained new knowledge about his friends and himself that he wouldn't trade for the world. Those things translate into his willingness to help old and new friends alike if they ever need it. He freely shows his passion for helping those at the bottom get to the top. And that's the definition of this finished masterpiece-friends helping friends get to the top. Mark's definition has been recorded in time for all to remember and we're sure we will see more out of this Texas crew.

View Photo Gallery | 13 Photos
Photo 10/13   |   2000 Ford Ranger custom Truck Bed
Interior
Seats: 2002 Toyota forklift seats
Material: Water-resistant vinyl
Dash: Custom-built fiberglass dash
Door Panels: Custom fiberglass
Center Console: Custom fiberglass
Flooring: Outdoor carpet
Headliner: The blue sky
Misc: Shifter chrome ring off of household stove burner beauty ring, shifter boot and ring built by owner's wife, Crystal
Engine/Performance
Intake: K&N cold-air intake
Battery: Optima RedTop
Special Thanks From Owner
"Special thanks to my wife Crystal for supporting me throughout the build, Mississippi Rob for opening doors and help getting the truck where it needed to be, Patrick Reed for spending countless hours on the paintjob. I would also like to thank Mark of House of Kustomz for spending his free time on my truck, Victor Gallegos for helping me with the frame, Grant Kustomz for the tailgate skin, and everyone in Severed Ties for the help and support."