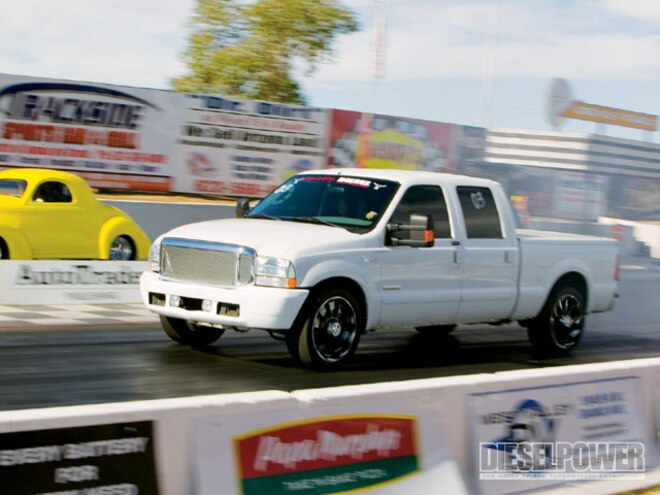 If you are a carpenter, you probably know how to build a shelf. If you are a pilot, you probably know how to fly a plane. Well, Tim Schritter is the shop manager at ATR Performance Center in Kingman, Arizona, so you can probably guess that he knows a thing or two about modifying vehicles. Tim's personal ride is an '04 F-250 Super Duty crew cab shortbed that he uses for daily driving, towing, and drag racing. The 6.0L is not the first diesel engine that comes to mind when most people think of drag racing, but Tim doesn't shy away from a challenge. To highlight this point, his truck is a two-wheel-drive model.
View Photo Gallery | 15 Photos
Photo 2/15   |   2004 Ford F250 Super Duty left Side Angle
Go Low
"I don't like dirt!" Tim proclaims matter-of-factly. So instead of driving one of the lifted Super Dutys that are so common around Arizona, he went the other direction. The front end was lowered 3 inches using DJM Dream Beams and the rear was lowered 5 inches by installing DJM drop brackets and spring hangers. With a 156-inch wheelbase, the truck is long and low, but Tim claims it is easier to get his kids in and out of the truck. The wheelwells are filled with 305/40R22 Nitto 420S tires wrapped around 22-inch Gear Alloy rims. The lowered stance is complemented by chromed badges, a billet grille, and a color-matched SnugTop tonneau cover. The cover fits over a factory '08 tailgate and taillights, and the same '08 truck also contributed its mirrors in an effort to update Tim's '04 F-250.
It's What's Inside That Counts
There are more changes to the truck than just appearance, although it would be hard to tell with a quick glance under the hood. The engine bay is still adorned with the stock intake and factory turbo, which might lead you to believe this truck is all show and no go. You would be mistaken, however, as this is a perfect example of that phrase uttered by mothers all across the country: "Its what's inside that counts." After 75,000 miles of abuse, the 6.0L Power Stroke gave up the ghost just over a year ago, and Tim took the opportunity as an excuse to upgrade, instead of just repair.
View Photo Gallery | 15 Photos
Photo 3/15   |   The Nitto 420S tires work well, but a set of dedicated slicks are in the works and should put Tim Schritter's 6.0L into the 13s.
The block was bored .040 inches over and fitted with lightweight Mahle aluminum pistons and rings fitted to the factory rods and crank. New lifters and pushrods were added, and the failure-prone EGR was replaced with an Elite Diesel EGR block-off plate. MPG Head Service added an Elite Diesel Stage 1 camshaft before bolting the heads to the block with ARP head studs. Despite the extensive upgrades, the factory turbocharger, injectors, and even the stock airbox were retained. "The Ford airbox actually flows quite well, particularly after I cut the front sheetmetal next to the headlight to allow more airflow. I ran out of money when I was building the engine," admits Tim. "While I was inside the Power Stroke I wanted to add the best parts possible. I can always get a bigger turbo or new injectors later, and I know that my engine can handle the increased power without a problem."
External clues that the diesel powertrain is not exactly stock are given by the CFM Plus intake and the Diamond Eye exhaust. There's a 4-inch downpipe that runs to a 5-inch exhaust that somehow manages to fit between the body and the ground where it exits in front of the rear passenger tire. Inside the bed, a huge 18-gallon aluminum storage tank holds the water and methanol. Diesel fuel is supplied by an Air Dog fuel system and injection is controlled by an SCT programmer with tunes by Tadd Layton at Elite Diesel. The combination is good for 422 hp on the dyno and quarter-mile times of 14 seconds flat at 100 mph.
'Til Death Do Us Part
The power is routed through a Ford 5R110 fitted with a Roadrunner billet torque converter with upgraded steels and clutches. From there, the stock 10 1/2-inch rearend uses a Detroit Trutrac to transmit power evenly to both rear tires so that Tim is not stuck doing one-wheel burnouts. Inside the truck, more pieces were scavenged from an '08 parts truck. Late-model leather seats were installed, and Tim intends to add the '08 dash and gauge cluster next. "I plan on being buried in this truck. My better half calls it my mistress." With that sort of dedication and the resources at ATR Performance Center at his disposal, it won't be long before Tim's 6.0L is in the 13s-maybe even faster.