A Robot That Forages For Its Own Fuel 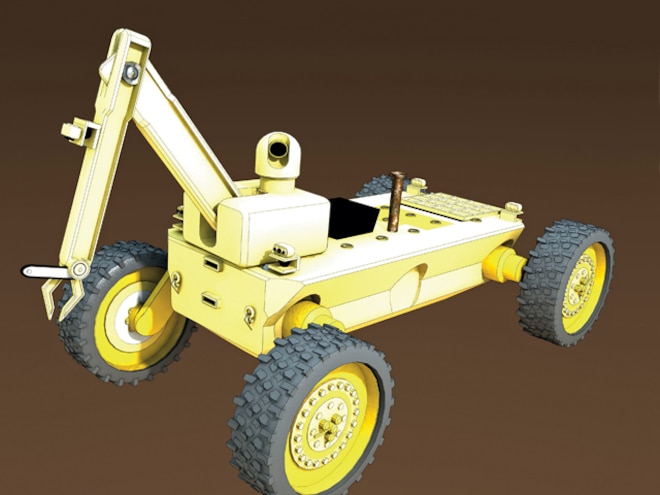 The most technologically advanced war machine is useless if it doesn't have the energy it needs to keep running. That is why the U.S. military, under the Defense Advanced Research Projects Agency (DARPA), has funded the development of this Energetically Autonomous Tactical Robot (EATR), which is designed to find its own energy sources in the battlefield. Robotic Technology Inc. provided this vehicle with the artificial intelligence and appendages it needs to conduct long-range, long-endurance missions without the need for conventional refueling.
View Photo Gallery | 3 Photos
Photo 2/3   |   energetically Autonomous Tactical Robot right Rear Angle
Just like any herbivore, the EATR is programmed to forage for biomass-based food, which includes anything plant based. The job of turning biomass into energy was given to Cyclone Power Technologies. It designed a hydrogen and carbon monoxide (syngas) generator that uses external combustion to drive a steam engine, which in turn spins an alternator that generates power for the EATR's electrical systems. Since a furnace is less picky than internal combustion engines, the EATR can run off any type of fuel that gives off heat. It's been calculated that about 3 to 12 pounds of dry biomass will produce 1 kilowatt-hour (kWh) of energy, or enough to drive the EATR two to eight miles. This is just one of the many applications for small steam engines. According to Cyclone, its waste heat steam engine is able to scavenge 7 hp from a diesel truck engine's exhaust while cruising at 60 mph.
View Photo Gallery | 3 Photos
Photo 3/3   |   energetically Autonomous Tactical Robot external Combusion Engine