A Blazer With Horsepower To Spare 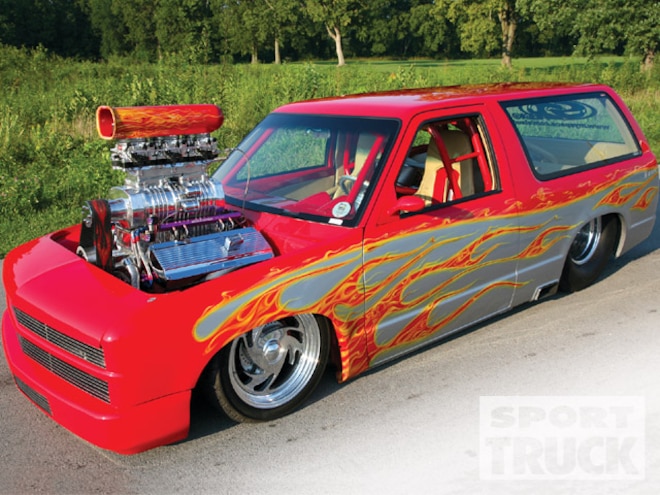 Carl & Kelly Peters
Freeman Spur, Illinois
'84 Chevy S-10 Blazer
Let's take a moment and run through the list of modifications done to Carl and Kelly Peters' 1984 S-10 Blazer. It's channeled, has a dash from a '59 Impala, a leather interior, airbags, and a paintjob that combines traditional and realistic flames. But really, there's one important detail about this particular SUV that really dominates the overall picture and it's that one simple detail that was the driving force behind this build-a set of valve covers.
View Photo Gallery | 7 Photos
Photo 2/7   |   1984 Chevy S10 Blazer custom Seats
A few years back, Carl picked up a set of billet valve covers for a big-block Chevy V-8 that he really liked. They sat on a bench in his garage for a while, just waiting to find a project to go on. When he picked up the '84 Blazer, ideas started rolling around in his head. He could lay it out on big wheels and call it good, or build a Pro-Street monster that struck fear in the hearts of all those who lined up against him at the track. He weighed his options and spent some time pondering over what he really wanted to do. Then, one day, he noticed those valve covers sitting there on his bench, and he decided to put everything together and build a truck that was the best of both worlds.
A phone call or two later and Carl had a 540ci long block on the way, ready to be topped off with all sorts of goodies including Merlin cylinder heads, a B&M MegaBlower, and three 800-cfm Edelbrock carbs. Why 800s? Because the 600s weren't giving him enough fuel. And even though there's a Nitrous Express Super Shark Nozzle system capable of putting out anywhere from 150-1,200 horses installed on the engine, it's not active. It's just insurance in case Carl decides he wants to go any faster. As it is, he's pushing 1,200 horses out of the mammoth block, something he's pretty happy with.
View Photo Gallery | 7 Photos
Photo 3/7   |   1984 Chevy S10 Blazer left View
The motor seems to overshadow the truck a bit, but look further and there's even more details. The front clip was built to resemble a '94-'98 Silverado and was molded to the fenders. The truck is channeled and 'bagged, a real rarity for the Pro-Street scene. Carl even pulled out the paint gun himself to lay down the two-tone and flame job. Out back, the taillights were shaved, and LEDs were flushed to the sheetmetal.
The interior of this truck is no slouch either. The stock dash was yanked and in its place sits a dash from a '59 Chevrolet Impala. That's not an easy swap to do, because Carl had to take quite a few inches out of the middle just to get it to fit. Then he fabricated metal upper door panels and a flowing console with gauge pockets that match the Impala pods. Of course there had to be a crazy rollcage in the SUV to keep Carl safe, and this one breaks the mold. It's a really cool interior on a truck capable of smoking people on any track, any time.
View Photo Gallery | 7 Photos
Photo 4/7   |   1984 Chevy S10 Blazer custom Interior
It's a different concept to be sure, but the total vision looks awesome. Carl's not done building either, he's got a few projects in the works including a '60-'66 C10 laying rocker on 22s and a late '70s Camaro that he's working on for his daughter. Seems like everything Carl does is fast.
The 411
Engine/drivetrain:
540ci Chevrolet big-block V-8 putting out 1200hp / Merlin cylinder heads / Eagle crankshaft / roller rockers / Eagle rods / 8.5:1 Keith Black pistons / Comp roller cam / B&M MegaBlower running 15 pounds of boost / three 800-cfm Edelbrock carbs / Nitrous Express Super Shark Nozzle System which is adjustable from 150-1,200 horsepower / SuperChiller intercooler / MSD Ignition / Optima battery located behind the passenger seat / Magnaflow 500 fuel pump / Turbo 400 transmission / 4,500-rpm stall converter / 2-1/2-inch custom-built headers / 4-inch to 3-inch custom-built exhaust routed into the quarterpanels
By: Carl Peters & Family, Freeman Spur, Illinois
View Photo Gallery | 7 Photos
Photo 5/7   |   1984 Chevy S10 Blazer door Panel
Rims:
Front: 17x5 Colorado Custom Wildhorse with 2.5 inches of backspacing
Rear: 15x15 Colorado Custom Wildhorse with 4-1/2 inches of backspacing
Tires:
Front: Dunlop 120x17 Motorcycle tires
Rear: Mickey Thompson 33x21.5x15
Suspension:
Front: 2,600lb Firestone airbags / BellTech drop spindles / channeled front frame / back-halved with 2x3 square tubing
Rear: Sleeve-style airbags
Accessories: 1/4-inch DOT airline / Dana 60 rear end / full rollcage
By: Owner & Family
Body Mods:
Shaved bodylines, ribs in roof, cowl, handles, and taillights / front end fabricated to look like an '94-'98 Chevrolet Silverado / Sir Michaels rollpan with LED taillights / LED third brake light frenched into rear hatch
By: Owner
View Photo Gallery | 7 Photos
Photo 6/7   |   1984 Chevy S10 Blazer left Side View
Custom Paint:
DuPont red & silver with metal flake / traditional flames with real-flame accents
BY: Picasso's Airbrush Express, Owensboro, Kentucky (airbrushing), Owner (basecoat and traditional flames)
Interior:
Kirkey racing seats wrapped in tan leather / '59 Impala dashboard, narrowed and shaved / custom console / leather & steel door panels / billet interior handles / Auto Meter gauges / Colorado Custom Wildhorse billet steering wheel
BY: Kentucky Customs, Morganfield, Kentucky
Audio/video:
Panasonic CD player mounted in the glovebox / 6 1/2-inch Memphis Audio mids and highs / two Memphis Audio amplifiers totaling 800 watts / Memphis Audio 12-inch M3 subwoofers
BY: SI Audio, Herrin, Illinois
View Photo Gallery | 7 Photos
Photo 7/7   |   1984 Chevy S10 Blazer tank
Club:
N/A
Special Thanks:
"To my wife Kelly and kids - sorry for all of the headaches and heartaches."