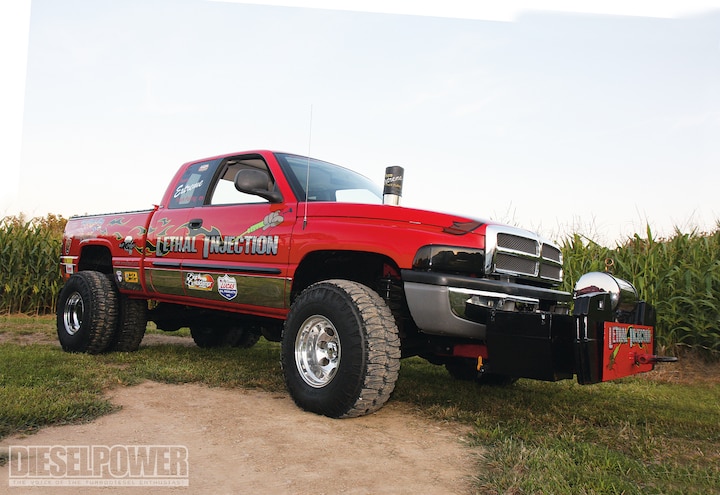 Back around the turn of the century, when a chip, intake, and exhaust were all anyone needed to be competitive at their local sled pull, Bill Heyen was known for showing up on a regular basis and spoiling the fun. You see, when everyone else was making 300 hp, Bill's '02 Dodge Ram 2500 was cranking out 500 hp, which, believe it or not, was a big power number eight years ago. And after literally pulling the sled out the back door and onto the street at a local event, he knew he would be addicted for a while.
View Photo Gallery | 12 Photos
Photo 2/12   |   2002 Dodge Ram 2500 right Front Angle
Fast-forward to the present and you've got an entirely different level of competition on your hands. In any given sled pulling class, trucks have to be pushing the limit just to have a chance of finishing in the top ten. This couldn't be anymore true for the class Bill has been running in for the last several years, the 3.0-inch-diameter-inducer Pro Stock diesel truck class in the Illinois Tractor Pulling Association.
As the owner of Extreme Diesel Motorsports in Gillespie, Illinois, Bill's done all the work himself, with the help of his brother Ben, and his cousin. And although the truck has housed a lot of different engines and setups over the years, when we ran into Bill, he seemed to have settled on his current combination-one that consists of a 5.9L Cummins block and crank, a custom camshaft, connecting rods and pistons derived from a 6.7L, and a custom 24-valve cylinder head. A set of ARP head studs keep the head attached to the block.
Bill turned to Area Diesel Service for a P7100 injection pump that can push some serious fuel. Area Diesel calls it the Pro Puller P7100. He also had Area Diesel Service build a set of injectors with 9mm tips. For air, Area Diesel built a custom BorgWarner turbocharger with a 3-inch inducer as well. Bill fabricated the intake plumbing, manifold, 5-inch exhaust, and even designed and constructed his own air guillotine for the turbo.
With all the fuel he was throwing at the truck, things were bound to get hot. So Bill had a simple solution: an air-to-water intercooler. After fabbing up the unit in front of the engine, he also built an icebox, which he mounted on the passenger side of the front weight rack. The icebox holds roughly 40 to 50 pounds of ice.
Typical of high-horsepower pulling rigs, Bill's Dodge relies on a trusty single-speed reverser transmission and drop box from Pro Fab Machine to get power to the ground. Aiding in the process is a triple-disc pulling clutch from Haisley Machine. Low 6.20 ring and pinion gearing is housed in both axles, and for optimum traction, the stock front Dana 60 was outfitted with a spool, and the rear Rockwell 106 has a Detroit Locker. Bill's tire of choice is Interco's TrXus STS, and he runs four 35x12.50R16s on 16-inch Pro Comp wheels.
View Photo Gallery | 12 Photos
Photo 9/12   |   Like most 3.0 trucks, Bill's is graced with a Rockwell axle in the rear. Future plans call for a more powerful engine and an upgrade from the Rockwell 106 you see here to an SQHD rear axle.
It's commonplace in the sled pulling world to keep certain aspects of the powertrain a secret. After all, having built the engine himself (including doing most of the machine work), Bill doesn't want everyone to know what he's done to get such a powerful 3.0 truck. "I guarantee you there are things in this engine you won't find anywhere else," Bill told us. "It's all one-off custom parts. But that's the prideful part-we built it ourselves. We picked out our own cam, and we looked through all kinds of turbos and picked the one we wanted to use, and so on."
Bill is truly a hands-on competitor in the sled pulling sport. No one turns wrenches on his rig except for him and a few select friends. He told us that putting this truck together from the ground up and seeing it be competitive night after night is what it's all about. The fact that he's always high in the points standings during the ITPA pulling season and won the Pro Stock Class at the Southern Invitational sled pull in the winter of 2009 says a lot. Pull after pull, Bill has proven his one-off truck can hang with the best of them.