A Diesel Fanatic Who's Not Sentimental 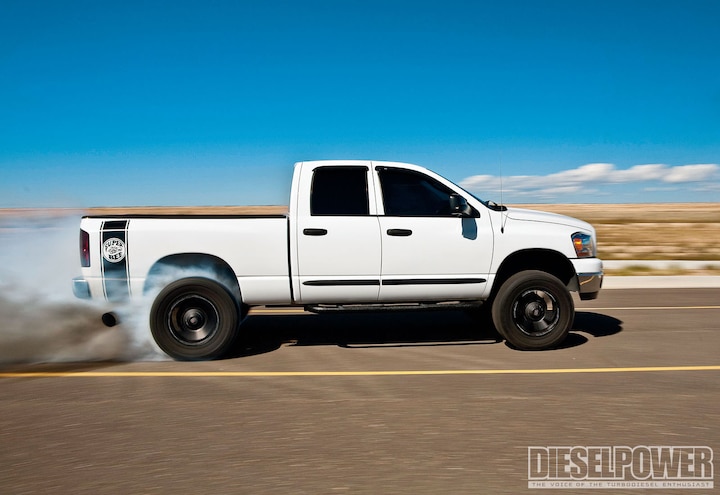 When your name is David Salazar, you are expected to drive a diesel truck. "D" for David, plus "Sal" for Salazar, equals "DSAL," or diesel. For years, David's license plate read DSALF250, as Salazar drove a heavily modified Super Duty with a 7.3L Power Stroke. The Power Stroke put down 476 hp, but that was after David made a significant investment in the engine. Adding insult to injury, DSAL was getting beat on the dyno and at the dragstrip by guys in Chevys and Dodges who had programmers and an exhaust. When an unsolicited offer came across the table to purchase his Ford, Salazar sold it without a second thought. As soon as the check cleared for the Ford, DSALF250 became DSALRAM.
View Photo Gallery | 15 Photos
Photo 2/15   |   With more than 600 hp on tap, the Ram has no problem turning the rear tires into piles of smoking rubber. At the dragstrip, David Salazar launches his DSALRAM in four-wheel drive to limit the tire spin, but it doesn't make for very dramatic photographs.
Seen-It Cummins
The Ford's replacement is an '06 Dodge Ram 2500 Quad Cab with a 5.9L Cummins (of course), a 48RE automatic, and four-wheel drive. In the first few weeks that he had the truck, David added a Smarty programmer, High Tech Turbo HTB2 turbo and 5-inch Farmboys Diesel exhaust from the turbo back. At this point, he was already making more power than he ever got from his 7.3L Power Stroke. While it is fairly easy to get torque from a 6BT, Dodge transmissions were not built to hold much more than factory power. To remedy that problem, the next upgrade was a fully built Goerend 48RE. The new transmission uses a billet triple-disc torque converter, a custom valvebody with increased line pressure and revised shift points, billet shafts, Torrington bearings, and six-pinion planetaries. The line pressure is further controlled by a DTT Shift Enhanser. David got a smoking deal on the transmission when he traded a friend who was returning his truck to stock.
With the transmission ready to withstand big power, David turned his attention back to the Cummins. To get more air into the engine, a custom intake was built utilizing a large, conical Amsoil dry filter. The HTT turbo was also replaced with a BD Super B Special that uses a 64mm compressor, 71mm turbine, and 14mm exhaust housing. More fuel was also added to the equation, as the common-rail injection system is one of the Cummins' biggest advantages over the Ford HEUI architecture. Starting at the tank, an AirDog 150-gph lift pump was bolted to the frame to deliver plenty of clean fuel to the CP3 pump, which David modified himself with the help of a DIY Arson III kit from Wicked Diesel. "I like to do the work myself instead of paying someone else to do it, which leaves me more cash to buy even more mods," says David. Vulcan Performance Fireball 90hp injectors deliver the fuel from the CP3 pump with help from the Smarty TNT tunes.
More Than Just Power
The combination has made 620 hp and 1,235 lb-ft of torque on the dyno and allowed David to turn 12.9 seconds on the quarter-mile dragstrip at an elevation of 5,300 feet. Content with the power from his Cummins engine, David had the opportunity to address the aesthetics of his new truck as well. A color-matched Dodge sport grille was added up front, and custom Super B graphics were added to the bed. "I made the stickers myself, as well as the Smarty sticker," David explained. "I actually make all of the stickers for Smarty, not just the one on my personal truck."
View Photo Gallery | 15 Photos
Photo 9/15   |   David makes all of the stickers for the MADS Electronics Smarty brand, so it only makes sense that he has one of his stickers on the back of his own truck.
A set of 35-inch Toyo Open Country M/T tires are mounted on 22-inch KMC XD Monsters at each corner. In order to clear the big tires under the front fenders, a 2-inch polyurethane leveling kit was added above the coil springs. On the inside, David replaced the cheesy wood surrounds with blacked-out plastic for a monochrome look and added DiPricol gauges to the A-pillar that monitor boost pressure, EGT, and transmission temperature. "Unfortunately, I still have the '06 stain-prone factory interior," David lamented. "The seats in my Ford were a bit nicer."
What The Future Holds
"I hope to add twin turbos in the near future," confessed David. He plans to complement the twins with even larger injectors and head studs to keep all of that air and fuel in the cylinders. "After the future modifications are completed, I'll probably have to go out and buy a new truck for my wife," he admits. Given his lack of sentiment in the past, there could very well be a DSALMAX feature sometime in the future.