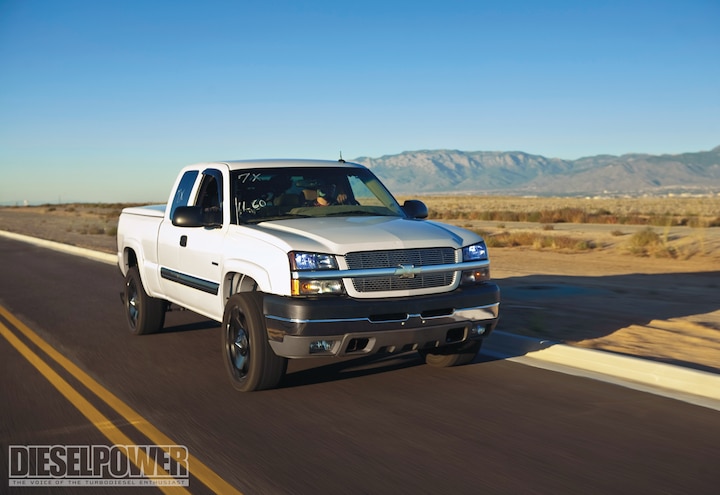 Diesel motorsports is still in its infancy, and as such, it is constantly evolving. This is part of its appeal-there is still plenty of room for innovation with diesel powerplants. So it should come as no surprise that many of the vehicles featured in the pages of Diesel Power have undergone changes by the time the magazine hits your doorstep. One such truck is Newly Tolf's '04 Chevy Silverado 2500HD, which we featured almost two years ago ("Worked Truck," May '08). At that time, we marveled at how hard Newly was able to beat on his 170,000-mile Duramax with ARP head studs as the only internal modification.
View Photo Gallery | 13 Photos
Photo 2/13   |   2004 Chevy Silverado 2500 HD right Front Angle
Total Destruction
Well, a lot has changed since that time. The first thing Newly did was change the look of the truck with 22-inch KMC Rockstar rims and 305/40R22 Nitto Dune Grappler tires. The black rims were complemented with a black fuel door, black body molding, and a black exhaust tip on the 5-inch MBRP turbo-back exhaust. Newly also ditched the 80-gallon transfer tank in the bed and added a tonneau cover for less weight and wind resistance. He kept flogging the truck, though, until the LB7 engine finally gave up after 220,000 hard miles. The stock engine could have been fixed after the injector hold-down broke and pushed the injector out of the cylinder, but instead he saw it as a great opportunity to upgrade.
More Power
"I wanted to build an engine for a while, but it took a lot to kill the stock Duramax," Newly admits. He had already purchased another block before the stock engine grenaded, so little time was lost. He took the block to ATS, which worked its magic on the bottom end with a cryogenically treated crank and LB7 pistons that were cut and coated for lower compression and reduced friction. Crower rods were selected and the rotating assembly was balanced to allow the engine to spin to more than 4,500 rpm. A custom-ground ATS camshaft was installed along with a SoCal Diesel vibration damper. SoCal Diesel was also tapped for its Stage 2 cylinder heads, which feature oversized valves, five-axis porting, and beehive valvesprings. The whole crew at ATS spent many late nights helping Newly get the engine built. In fact, he is so tight with Clint Cannon and his staff, that he had the block powdercoated in ATS' distinctive purple.
A Duramax that can spin 4,500 rpm needs a lot of air, and Newly's breathes in plenty through the massive ATS Aurora 6000 turbo. The charger uses a 76mm inducer and works in conjunction with a 4-inch ATS downpipe mated to an MBRP 5-inch exhaust system. Newly is also running the new ATS cast-iron Duramax exhaust manifolds and 2-inch up-pipes with high-pressure bellows to prevent leakage. Fuel is supplied by a PPE billet fuel tank pickup that's connected to a FASS 150-gph lift pump with a 5/8-inch fuel line. The FASS pump feeds dual ATS CP3 pumps that maintain rail pressure-even with the Dynomite Diesel injectors that provide 60 percent more fuel than stock
It Takes More Than Motor
Newly had Mike Meyer from Las Vegas do all of the tuning on the new Duramax to bring the combination together and keep the truck streetable. The engine makes 753 hp and 1,357 lb-ft of torque, and that's before Newly adds a 200hp shot from Nitrous Express. Of course, all of the power in the world isn't worth much if the rest of the drivetrain can't support it. The ATS-built Allison 1000 transmission has more billet parts than the Terminator, including the input shaft, output shaft, and flexplate. The ATS Five Star torque converter was built with a higher stall speed than stock to get the turbo spooled up and the engine into its powerband. An EFILive calibration controls all of the shifting and a Sun Coast transfer case brace helps the drivetrain live behind the big power.
Downstream, the suspension has been fortified to withstand repeated four-wheel-drive launches at the dragstrip. CalTracs bars keep axlewrap to a minimum in the rear and work in conjunction with the stock 3.73 gears and Gov-Loc. Up front, a billet centerlink and billet tie-rod ends with 3/4-inch rod ends keep the tires pointed straight.
What's Next
Thus far, the combination has yielded a best time of 11.8 seconds in the quarter-mile. That run was made on fuel only at an altitude of 5,200 feet, so Newly thinks there's a lot more on the table. He plans to make even more changes to the truck, with Version 3.0 coming soon. Newly's wish list includes twin turbos, modifying the injection pumps, slicks for the dragstrip, a rollcage, and 10-second quarter-miles. At the rate he's headed, he might already be there by the time you read this article.