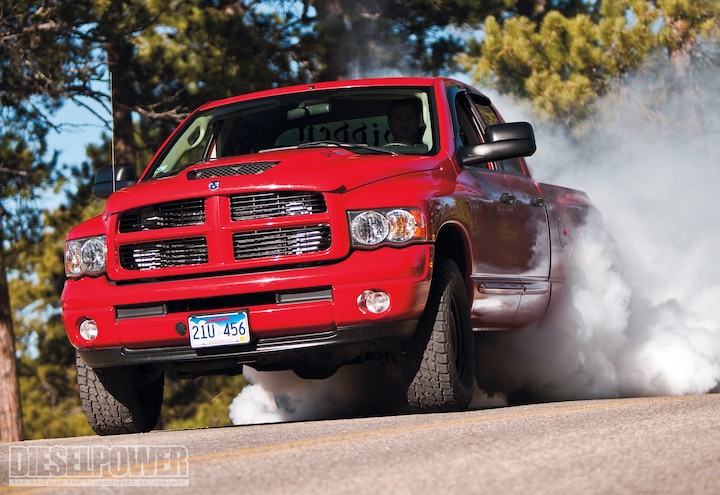 Form follows function is a credo that was originally applied to modern architecture by Horatio Greenough. The phrase applies to modern diesel trucks, too, particularly David Busch's '04 Dodge Ram 2500. Instead of focusing on shiny rims and a fancy paintjob, David put every dime of his money into making his truck as powerful as possible. To highlight the point, consider that when David received an insurance check for hail damage to the hood, fenders, and roof-he spent the money on his Cummins' cylinder head instead!
View Photo Gallery | 16 Photos
Photo 2/16   |   2004 Dodge Ram 2500 burnout
650 HP On Fuel
David ported the exhaust-side of the cylinder head himself and had Pro Machine in Rapid City, South Dakota, give it a five-angle valve job before adding Hamilton valve springs and chromoly pushrods. A high-pressure S364 turbo sits on top of a low-pressure S400 combined with plumbing from Wicked Diesels to create approximately 60 psi of boost. ARP head studs keep the head gasket from parting ways under the incredibly high cylinder pressures, while drive pressure is controlled by a Tial 46mm external wastegate. A huge AFE dry-flow filter handles the air intake, and a full 5-inch exhaust from the S400 feeds into a 6-inch stack in the bed. "The 5-inch downpipe was a chore to route," David admits, "but it provides hardly any backpressure and helps the EGT." Exhaust gas temperature is still a concern with the 120hp DDP injectors, even with all of the airflow. Fuel is fed to the injectors by a FASS 150-gph lift pump that pushes diesel to a CP3 injection pump modified with an Arson III kit from Wicked Diesels. The combination makes 651 hp and 1,249 lb-ft of torque-and that was before the headwork was performed.
It's What's Inside That Counts
Even though this is his first diesel truck, David says he "knew exactly what [his] plans and intentions were." Inside the dented Dodge Ram cab, there's a Clarion head unit with a built-in DVD screen that replaced the stock radio. The head unit shares dash space with three Auto Meter gauges that monitor boost pressure for the S400, as well as the overall boost pressure and transmission temperature. On the A-pillar, a DiPricol gauge displays fuel pressure while a similar gauge on the steering column reads rail pressure. An Auto Meter pyrometer is mounted in a custom aluminum panel in lieu of one of the heater vents.
View Photo Gallery | 16 Photos
Photo 9/16   |   David calls the Black Hills of South Dakota home and enjoys using his SRT-CTD for everything from drag racing to daily driving. The lowered suspension makes the diesel truck surprisingly sporty when traversing the roads around Mount Rushmore (seen in the background).
Below the pyrometer gauge is a switch that allows lockup of the Precision of New Hampton torque converter with three discs and a billet cover. David knows all of the power in the world doesn't amount to a hill of beans if you can't get it to the ground. Transmission parts seem to be the Achilles' heel of Dodge Rams-particularly input shafts. Neil Dunlap at D&F Transmission in Rapid City built David's current 48RE four-speed. It uses a billet input, intermediate, and output shaft from TCS. Additional TCS parts in the transmission include the billet front drum, dual-ring kick- down servo, dual-ring accumulator piston, and heavy-duty band strut, while the valvebody is from HTS.
Stand Out From the Crowd
Even though David has concentrated on power adders first and foremost, his truck will still not be mistaken for stock. The bumpers and grille were paint-matched to the rest of the truck, and an SRT-10 hood was added. The stock steel rims hold 295/70R17 Nitto Terra Grapplers under a lowered suspension that consists of cut front coils and removed overload leaves in the rear. This gives the four-wheel-drive truck a more aggressive stance and reduces wind resistance on the road and track. With a light throttle, David tells us that 24 mpg is not difficult to achieve with his truck. It doesn't get much more functional than 650 hp and 24 mpg in our book.
View Photo Gallery | 16 Photos
Photo 10/16   |   An SRT-10 hood was added.