A Diesel-Powered Jeep Originally Built For The Military 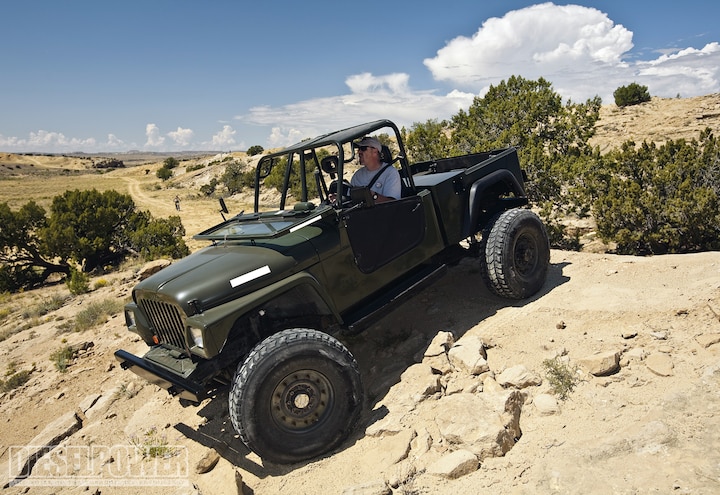 The torque generated by diesel powerplants is advantageous for hauling everything from travel trailers to competition sleds to fighter jets. Yes, we said fighter jets. It's a little known fact that the United States Air Force has been using specially constructed diesel trucks to move aircraft around for decades. The Air Force's current fleet of tugs is comprised primarily of short-wheelbase Ford and Dodge diesel pickups. But prior to that, AMC built a series of diesel-powered Jeep CJ-10A pickups to shuttle around all types of aircraft. The Jeep CJ-10A utilized a fuel-sipping Nissan SD33 3.3L inline six-cylinder diesel engine-the same engine found in some International Scouts. Recognizing the potential of these unique vehicles (beyond their use on the tarmac), Jerome Jenkins purchased his CJ-10A at a government auction for less than $2,000.
View Photo Gallery | 9 Photos
Photo 2/9   |   Jerome Jenkins' off-roader began life as a military-spec Jeep CJ-10A aircraft tug. These vehicles were based on CJ-7 pickups that were sold overseas, but the U.S. Air Force also used them in the '80s and '90s to tow aircraft around its bases.
Diesel Drivetrain
Jerome scored his diesel Jeep with only 11,000 miles on it. Of course, who knows how hard those 11,000 miles were...Even so, the 90hp SD33 left something to be desired. To up the power and turn the big tires, Jerome added an exhaust manifold and an AiResearch turbocharger from an '80 Scout II that he found on eBay for $500. He then turned up the fuel on the Kiki injection pump by removing the fuel pressure spring to complement the added air. The injection pump originally used a vacuum linkage, but Jerome was able to retrofit a mechanical linkage to allow easier adjustments. A 2 1/2-inch exhaust system and conical intake were also added.
Behind the SD33 sits the factory TorqueFlite 727 three-speed automatic and stock transmission cooler. The CJ-10A NP208 transfer case, however, was not retained. In order to address the low power output of the Nissan diesel, the aircraft tugs were built with a cover plate over the transfer case shifter and permanently locked in low range. The gear reduction was great at the airfield, but not on the highway. So Jerome replaced the NP208 with a more common Dana 300 transfer case, which bolted in place without the need for an expensive adapter. The Dana 300 also uses a cast-iron case and is gear-driven, unlike the aluminum NP208.
Low-Budget Modifications
In addition to the transfer case and turbo, Jerome made a few other modifications in order to make his CJ-10A more capable on the trail. The biggest improvement was the Dana 60 front axle that replaced the factory I-beam. That's right, despite the presence of the transfer case, this Jeep began life as a two-wheel-drive tractor. The new front axle uses 4.88 gears, a welded differential, and dualie hubs to match the track width of the rear axle. The factory Dana 70 rearend was retained out back, but it was moved rearward to increase the wheelbase from a stubby 88 inches to a more reasonable 111 inches.
View Photo Gallery | 9 Photos
Photo 6/9   |   Extending the Jeep's wheelbase 23 inches added stability to the CJ-10A when climbing hills like this.
Jerome fabricated the bed out of a Jeep Wrangler tub that he cut between the door opening and the rear wheelwells. The tub was then enclosed in the front, and the factory 20-gallon fuel tank was mounted in the bed to provide plenty of range on the trail.
Enjoying The Results
Jerome still has some future upgrades planned as his budget allows, including new tires and more gear reduction. The current rolling stock consists of other military hardware; namely 37-inch Goodyear M/Ts mounted on Hutchinson double beadlock wheels-both taken from a military HMMWV. The HMMWV rims have a deep offset that keeps the track width reasonable without having to narrow the wide axle combination. While saving for the next round of modifications, Jerome plays with his rockcrawler and enjoys the multitude of trails around his home in Rio Rancho, New Mexico. The Jeep is fuel efficient, has plenty of cargo space, and the best part is that the whole investment cost him less than $5,000. To put that in perspective, Jerome has spent less on his whole Jeep than some people have on their twin-turbo kits!